Our solutions for central banks

Discover how our highly secure and bespoke solutions enable central banks and regulators to build an efficient financial market ecosystem with confidence.

Central banks are among the important financial institutions in the global economy. They play a vital role, by implementing robust monetary policy and ensuring smooth operations of the financial markets.

Refinitiv provides highly secure and bespoke solutions empowering central banks to act with confidence through every step of the financial market ecosystem. Our solutions help central banks improve their operational efficiencies and increase transparency of market participants. With our solutions, central banks can make markets more robust through rigorous reporting and market surveillance tools, remove the risk of manual processes, and provide access to larger pools of liquidity.

Managing liquidity and maintaining price stability are key responsibilities of a central bank. We help central banks to do both, as well as to effectively conduct open market operations, including serving marginal lending facility and running primary market issuance such as buying or selling currency. We can also automate the entire debt issuance process, from announcing the auctions, to adjudicating bids and publishing the results. 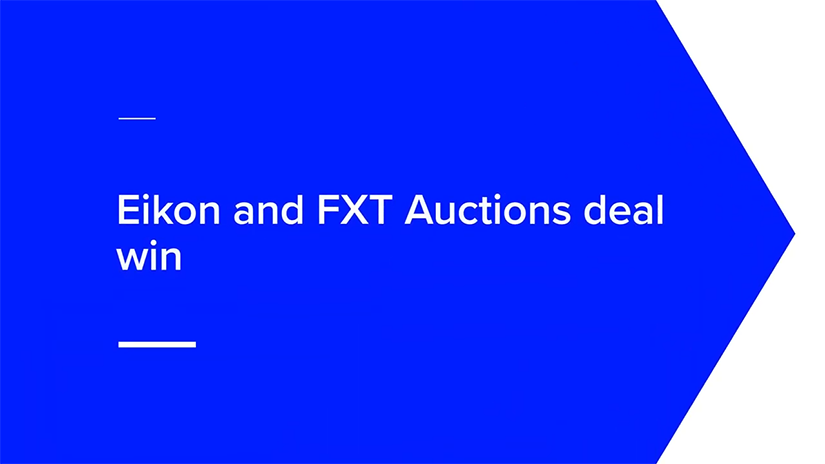 A key function of the central bank is to control the money supply in the economy through its monetary policy, which consists of two parts – currency and credit. Central banks are also tasked with managing foreign exchange reserves and market liquidity. Depending on the specific task at hand, central banks can choose from a variety of trading platform/liquidity pool.

Tradeweb is a leading global operator of electronic marketplaces for rates, credit, money market and equities. It provides access to markets, data and analytics, electronic trading, straight-through processing and reporting for more than 40 products, to clients in the institutional, wholesale and retail markets.

Central banks around the world rely on Tradeweb for direct access to deep liquidity, pre-trade price intelligence, flexible protocols and post-trade analysis to enhance their trade execution strategies and drive increased performance. Central banks were early adopters of Tradeweb due to the breadth of available asset classes and full compliance with perpetual audit trail.

Our trade matching will enable you to access firm pricing, achieve high certainty of execution and trade efficiently. Learn more about FX Spot and Forwards Matching.

Our flexible electronic trading platform provides you choice, agility, efficiency, and confidence in trading, from liquidity access to straight-through processing.

Connecting you with trading counterparties worldwide - from FX and commodities, spots, and derivatives, to loans, futures, and swaps.

Working with Global Relay, we provide a unified archiving portal enabling you to supervise and analyze your messaging and trading actions.

Central banks play a supervisory role in trading of currency. It needs visibility of the trading practices of financial institutions to police any breach or potential breach of regulations. Central banks are also responsible for ensuring price stability of currency. For this, they needs to monitor markets constantly and be able to intervene intelligently whenever the need arises.

Track, monitor and report trades executed on Refinitiv and third-party venues into a single real-time stream.

Central banks and local authorities around the world look to us as the pre-eminent provider of financial benchmark services, whether by calculating a benchmark for an administrator, or assuming the responsibility for the benchmark as administrator ourselves.

With a robust regulatory framework and ironclad infrastructure, Refinitiv is uniquely positioned to provide benchmarks built with integrity, transparency and trust. Where we provide services in connection with benchmark administration, we do so in a manner that is aligned with the International Organization of Securities Commissions (IOSCO) Principles and EU Benchmark Regulation (BMR).

Discover our range of data, indicies and benchmarks.

Central banks require high quality data, charting and analytics tools to understand how markets are interacting and to formulate monetary policy. Refinitiv Eikon with Datastream is the next generation Refinitiv platform, combining the premier desktop for financial professionals with Datastream’s powerful cross-asset charting and analytical tools. Upgrade from the Datastream Desktop (Advance) to experience enhanced, intuitive and convenient workflow, including auto suggest and shortcuts, and benefit from access to broader content and information, including the world-class Reuters News service, plus integrated collaboration tools.

Refinitiv is the world’s leading financial news provider supported by three key pillars. Reuters sits at the core of our news offering, and is combined with global third-party news coverage, made accessible with advanced search and analytics capabilities. Renowned for breaking news and market-moving scoops, Reuters provides timely and trusted national and international news to financial professionals around the world. Refinitiv combines award-winning Reuters news with thousands of global third-party news sources, providing even greater coverage across markets, regions and business sectors. To ensure our customers get the most from our news offering, artificial intelligence and text analytics make it easy to find actionable news and information of precise relevance.

Why use Refinitiv's market surveillance solutions?

Our high performance market data system provides you real-time tick-by-tick data. Explore an essential for anyone trading on our markets.

Our archive of real-time pricing data, covering OTC and exchange-traded instruments, from more than 500 trading venues and third-party contributors.

The Refinitiv Data Platform gives you access to a wide range of analytics and global market data in the Cloud, to help power your workflow-critical applications.

Our database provides accurate and reliable information and tools to help meet your due dligence, KYC and AML obligations.

Designed to help central banks make sound, sustainable investment decisions, our ESG data covers nearly 70% of global market cap and over 400 metrics. It helps central banks assess the risks – and opportunities – posed by companies’ performance in critical areas such as climate change, executive remuneration, and diversity and inclusion. Central banks can carry out their ESG research with complete confidence, because every data point is rigorously quality controlled and verified to ensure that it is standardized, comparable and reliable.

Our solutions around the globe

See how central banks and financial market infrastructure providers are using Refinitiv’s data, technology and solutions to act with authority.

Refinitiv partners to enhance the transparency of the secondary fixed income market in Kenya.

Discover leading insights fuelled by our access to world-class data and expertise. Our blogs, videos, special reports, research and thought leadership content provide you with answers you can trust.

Did central banks stop the reset?

This week we have a conversation with Andrea Zazzarelli, Chief Investment Strategist at Fathom Consulting, about whether the economy and market have entered a new cycler after the COVID recession, or whether policymakers have supercharged the previous one. Using Refinitiv’s best-in-class data, they look at the before and after growth trajectory and the impact of fiscal policy, as they answer a question from one of last week’s viewers. The direction of inflation is probably key to understanding if this is a new cycle or the old one on steroids.

Our data, your way

Our data offerings mean you can stay ahead - access data easily, assess trends and patterns, and understand where the market is heading next.

Explore our benchmark portfolio, with an unmatched breadth and depth spanning all major asset classes and regions worldwide.

Refinitiv is a market leading provider of global pricing and market data for the financial markets.

As the exclusive provider of Reuters news to the global financial community, we deliver trusted news tailored to you.