Gulf tensions: The threat to Strait of Hormuz oil

Strait of Hormuz oil tankers are on high alert after recent incidents including the seizure of a British-flagged vessel by Iran. Charts and data from Refinitiv Oil Research highlight the implications of these Persian Gulf tensions for the shipping industry and oil exports.

At just 21-nautical miles wide at its narrowest point, the Strait of Hormuz is considered the most important oil chokepoint in the world. More than one-third of global seaborne crude oil exports travel through the Strait, which links the big Middle Eastern producers with customers worldwide.

While dozens of oil tankers travel through the Strait every day, their passage over recent months has become much more fraught.

Recent developments, which include attacks on a number of internationally owned vessels and the seizure of a British-registered tanker, undermine the right of transit passage and threaten the maritime security of all ships passing through the strait.

A year on from analyzing the potential for Iran to close the Strait of Hormuz, our Oil Research team continues to provide in-depth coverage of the situation in the Persian Gulf. The team includes senior analyst Capt. Ranjith Raja, who as a former merchant navy officer has served with a number of oil tanker fleets.

The threat to Strait of Hormuz oil tankers

Refinitiv data shows that the medium-range tanker was on its way to Saudi Arabia to pick up its next cargo, having previously been to India with a shipment of chemicals from the United States. The British navy frigate HMS Montrose, which was patrolling in the area following a number of other attacks in the region, was unable to reach Stena Impero in time.

It is obvious that #StenaImpero deviated south trying to avoid the #IRGC. It appears she was trying to head towards #Sharjah for safety. Chopper and motorboats are too fast though. #OOTT #Oil #tanker pic.twitter.com/UXZXKxpD7s

Tracking data from Refinitiv also shows that the British vessel had not deviated from its passage through the Strait of Hormuz, where a strict traffic separation scheme is in operation under the rules of International Maritime Organization.

A recording of conversations involving the HMS Montrose, Iran’s Revolutionary Guard Corps and the ship’s captain confirm Stena Impero was ordered to deviate its course, despite protests from the British warship that the ship had the right of free passage.

The move by Iran is likely to have been a retaliation for the seizure of oil tanker Grace 1, which British officials stopped in Gibraltar on suspicion of violating EU sanctions on Syria.

Giorgos Beleris, Refinitiv Oil Research Manager, said the movements of Grace 1 had been attracting attention for some time, particularly after she loaded her cargo in Iran back in April.

He said: “Instead of crossing through the Suez Canal she went around Africa on a very slow journey before rendezvousing in Gibraltar to pick up supplies, which is where she was seized by UK forces.”

#RefinitivOilResearch has been tracking the #Iranian VLCC Grace1 which has been detained at #Gibraltar this morning. She departed Iran on 17/04 and remained floating off #UAE for 23 days before departing on 13/05. With no access to SUMED she had to pass around the Cape #OOTT #oil pic.twitter.com/LomRhsKUU4

The tit-tat developments involving Britain and Iran added to Gulf tensions after a spate of attacks, including four vessels within the UAE territorial waters off Fujairah. Meanwhile, armed drone attacks on a pipeline and pumping stations in Saudi Arabia have also contributed towards raising security concerns in the region.

While Iran denied any links to these attacks, the exact nature and the group responsible still remains unclear. With the United States mobilizing its fleet to ensure maritime and energy security through the Strait of Hormuz, the attacks highlight the potential for a full-frontal conflict in the region if the situation is not managed properly.

Why is the Strait of Hormuz so significant?

The majority of this is bound for Asia, although the West also relies heavily on supplies from the Strait. 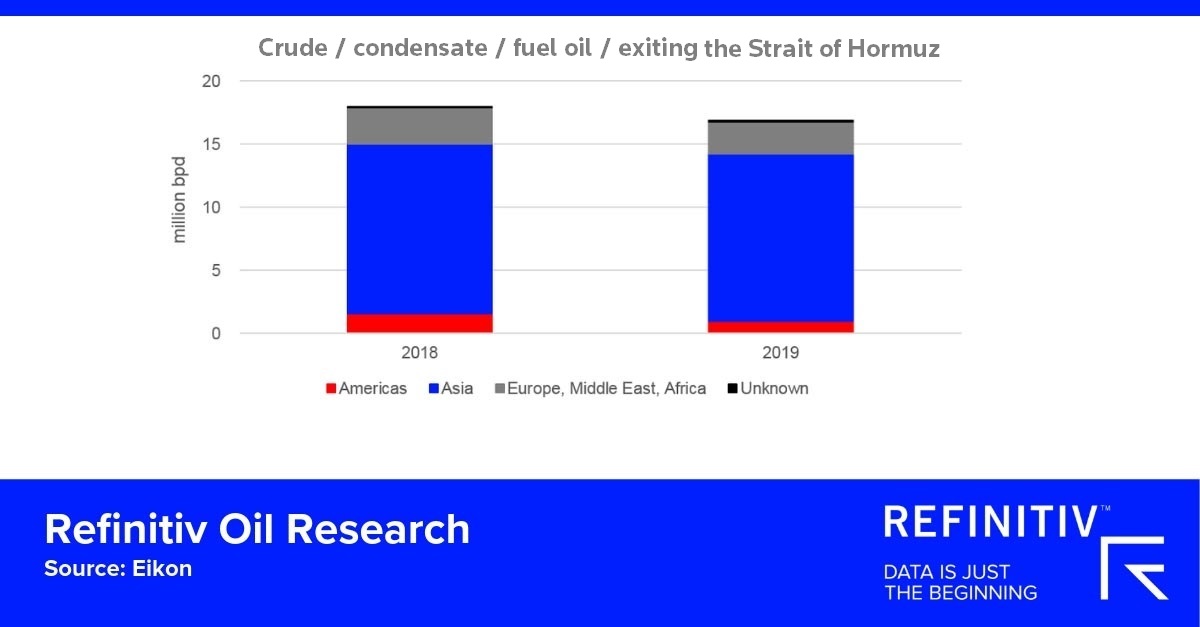 Any disruption to this important shipping channel has the potential to impact oil market sentiment. This was shown in June when prices of crude oil surged by as much as four percent following two attacks on tankers in the Gulf of Oman.

More than 11,000 oil and LNG tankers crossed the Strait in 2018, while for the first half of this year Refinitiv ship-tracking data shows around 5,250 ships to have passed the Strait. 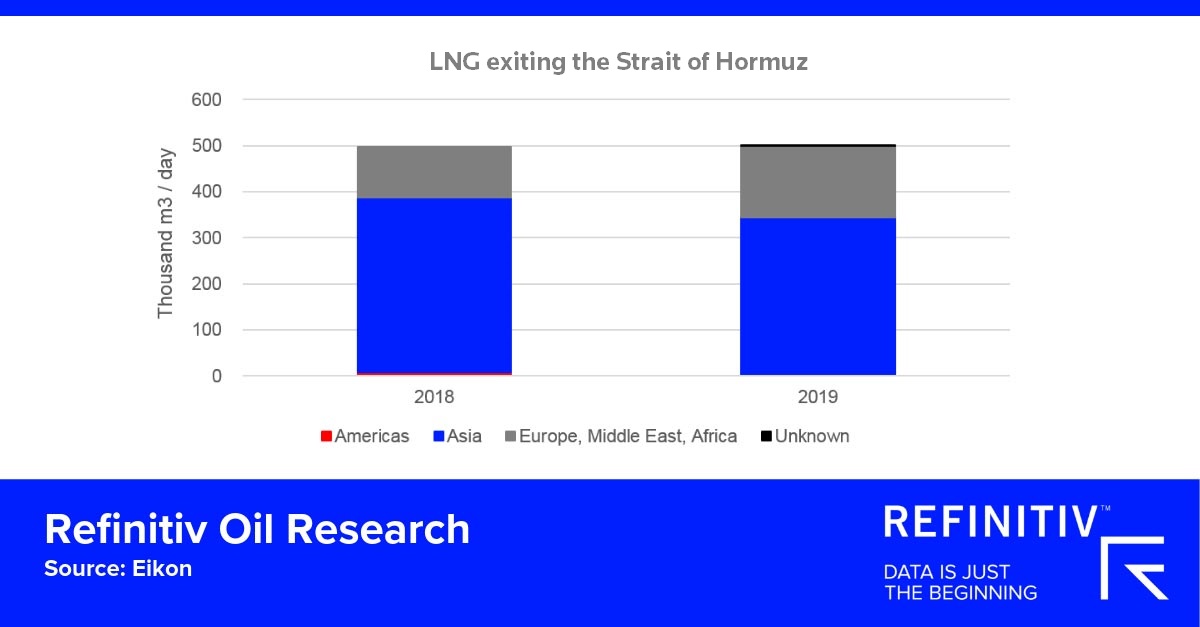 Of the 2018 transits, an estimated 5,010 ships were identified as fully laden Very Large Crude Carriers (VLCC). Traffic out of the Gulf appears to have slowed slightly in 2019 as Iranian oil exports have collapsed, declining by 1.8 million bpd year-on-year in June, to just under 500,000 bpd.

The risk of further Iranian retaliation means British-flagged tankers are now being given convoy assistance by Britain’s Royal Navy. Ninety British-flagged ships have so far exited the Gulf this year, 26 of which made the passage in June. The number of vessels transiting are in steep decline after the Stena incident, with only four British-flagged vessels exiting the Strait in July. 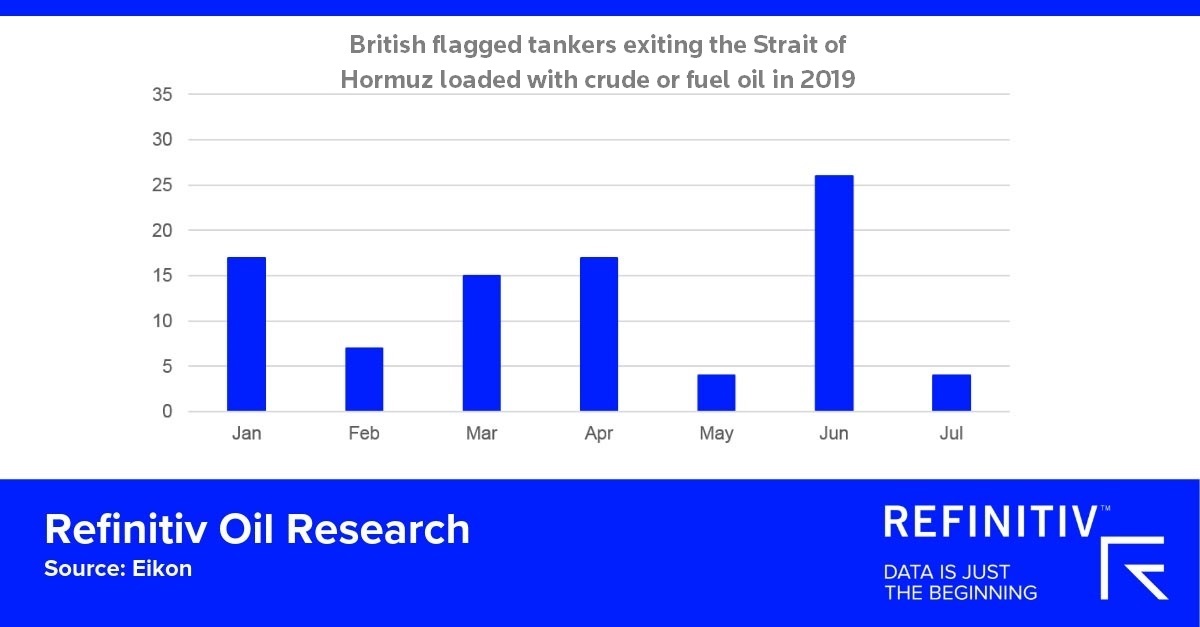 Implications for Strait of Hormuz oil and shipping

If maritime operators become more cautious about placing their ships in the region, there could be consequences for fuel oil markets such as the Fujairah bunker.

The spread between the Fujairah and Singapore bunkers has already widened to a near US$45 discount compared with Singapore. Weekly bunker loadings from Fujairah storage since the June attacks on the tankers have dropped to an average of 108,950 MT, while the YTD weekly average prior to June was at 150,125 MT. 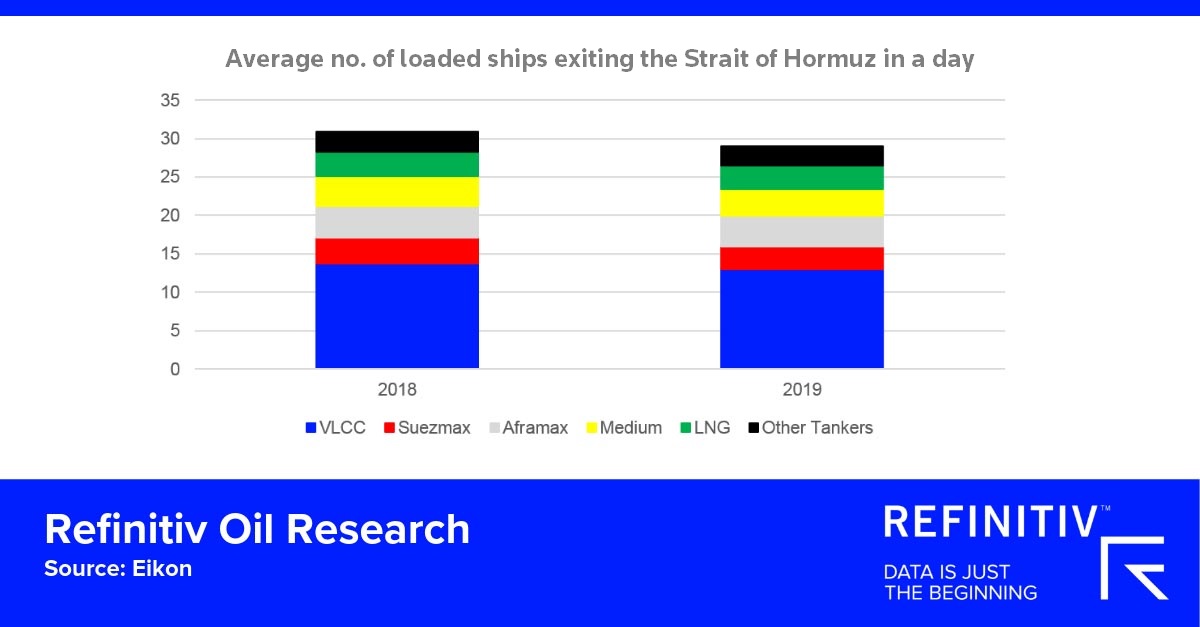 Despite this short-term volatility, there’s been a muted response in terms of the movement of crude oil prices.

This is largely because oil traders are primarily focused on the demand-side impact of a slowing global economy and the U.S.-China trade war. That said, the geopolitical risks and escalating Gulf tensions do provide a very strong floor for crude prices, which have recently been trapped in a fairly narrow range.

The possibility that security measures result in bottlenecks of vessels crossing the Strait could also slow down the flow of oil towards final buyers, creating an artificial supply shock.

And while it’s debatable whether Iran has the military capability to close the Strait, the failure of the U.S. and other naval forces to ensure safe transit for international vessels would have a negative impact on shipping premiums and leave ship owners fearful about sending their assets into the Gulf. 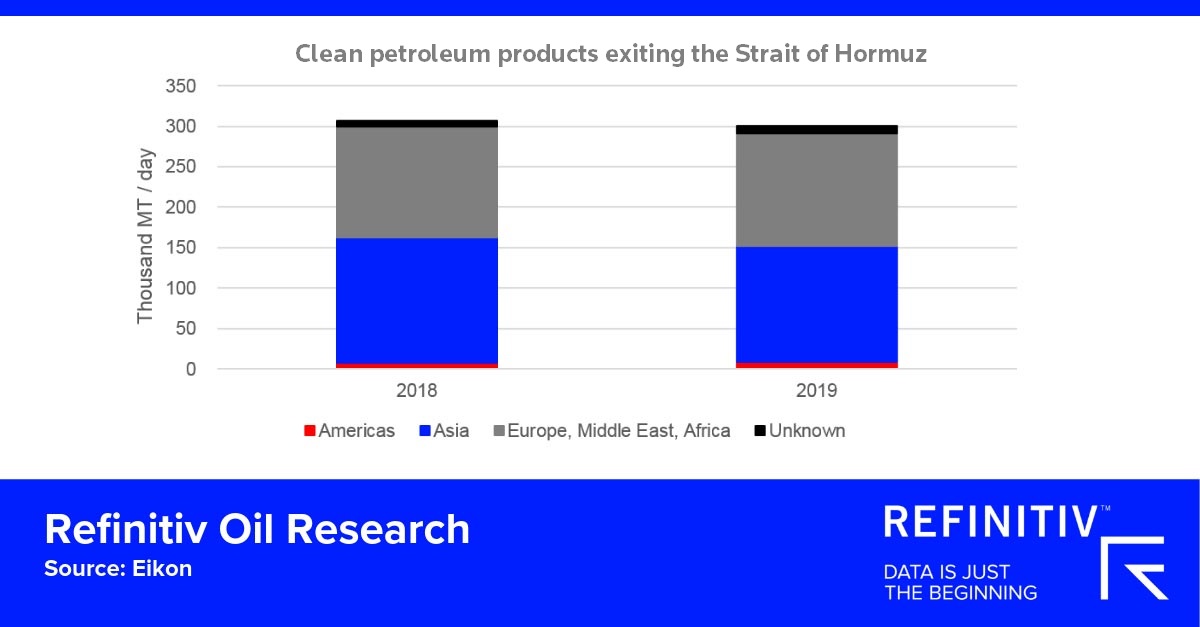 How is Eikon monitoring developments?

Refinitiv Oil Research has been at the forefront of global coverage, with apps and workflows on Eikon providing traders with detailed insight on the latest maritime movements in the Strait of Hormuz. Shipping data and commentary from Refinitiv experts have also been helping the world’s media to understand the fast-developing situation.

For example, in July the tanker MT Riah, which operates in the UAE, stopped transmitting its location after straying into Iranian waters. Captain Ranjith noted that the tanker had not switched off its tracking in three months: “That is a red flag,” he said.

We were also able to disclose that Grace 1 had been under scrutiny several months before its seizure, including the January occurrence when Iranian fuel oil was allegedly transferred into several tankers off the coast of UAE before being sent east. 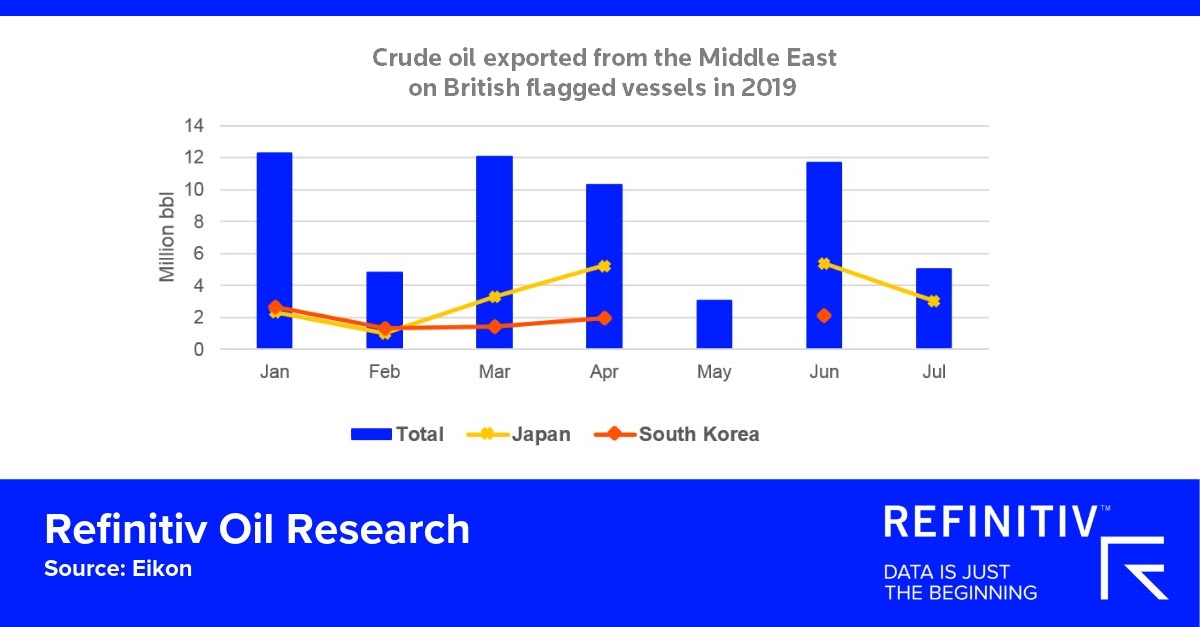 Vessel tracking on Eikon is a powerful tool that uses satellite-based tracking in order to understand ship movements and to provide port-to-port analysis. It is complemented by Refinitiv Oil Flows data, which provides early insight into where supplies are heading.

In addition, IMAP is also a visualization tool to analyze the end-to-end supply chain of commodities. The map provides comprehensive coverage of offshore shipping assets and onshore infrastructure.