On reflection, who are the winners and losers of COP26? 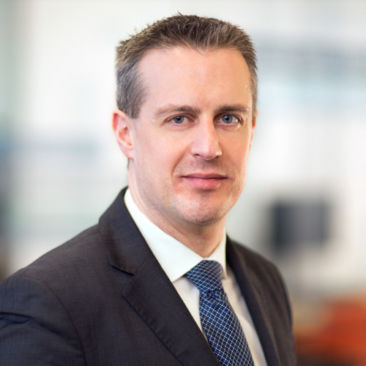 While the Glasgow Climate Pact was signed by 197 nations at the COP26 summit, last-minute concessions watered down the pledges. These concessions accentuated the fact that climate change is a political subject and that it is difficult to share the costs and opportunities of the climate transition equitably. We explore the winners and losers of COP26.

The 2021 United Nations Climate Conference received no shortage of coverage at the end of last year.

Politicians, economists, regulators, and the public at large attempted to make sense of the dynamics in Glasgow while the proverbial “sword of Damocles” – in the form of a potential climate crisis – hangs over the globe.

Its fate is seemingly dependent on the need for politicians to agree on transformative policy.

Given the growing importance of ESG integration into the investment process, and the desire by asset owners and allocators to optimise capital for long-term sustainable outcomes, we at LSEG, and our partners at Fathom, attempt here to summarise the discussions and outputs from the conference through the lens of financial markets implications.

Efforts to cap global warming are most commonly expressed through the country-based targets called ‘nationally determined contributions’, or NDCs.

During COP26, the International Energy Agency said that if all the climate pledges announced to date—which include NDCs and net zero/carbon neutrality pledges—were met in full and on time, the rise in global temperatures would be limited to 1.8 degrees by 2100.

This is still above the 1.5 degree target set out in the 2015 Paris conference (COP21), and the implementation of these commitments is far from certain. But we are narrowing the gap towards climate change goals, when compared with earlier pledges (see the chart).

Under the Glasgow Climate Pact, governments agreed to revisit and strengthen their NDCs before the end of 2022 to bring them in line with the Paris Agreement’s temperature goal. 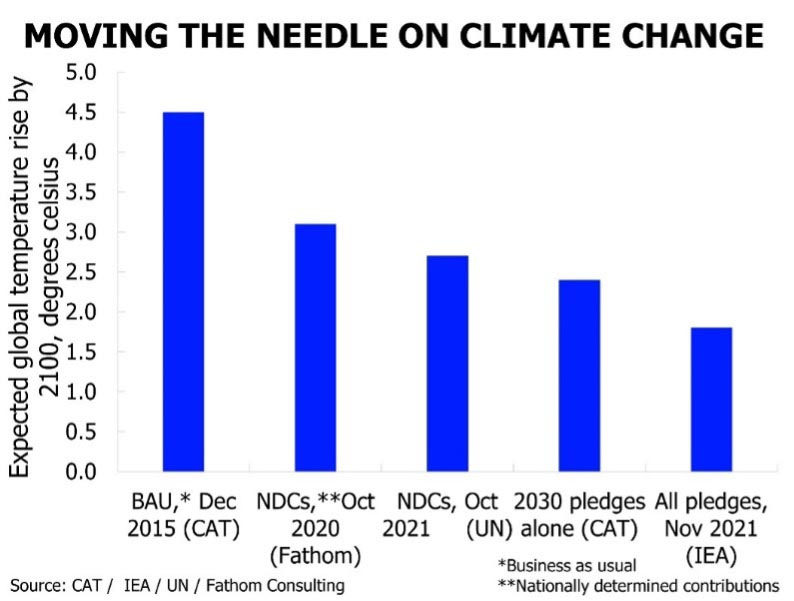 The outcomes of COP26

One notable outcome of the Glasgow Climate Pact was the reference to “accelerating efforts towards the phasedown of unabated coal power and phase-out of inefficient fossil fuel subsidies”.

Despite India’s and China’s success in changing the language on coal from “phase-out” to “phasedown”, this was the first time a reference to the reduction of fossil fuel usage had been set out in a COP conference communique.

Other important pledges made at COP26 included agreements to reduce methane emissions and to halt and reverse deforestation.

New technical standards should result in better and more comparable sustainability data: during the summit, the IFRS announced the creation of a new International Sustainability Standards Board (ISSB) with this objective in mind.

The UK has announced that all major financial institutions and listed firms will need to publish net-zero transition plans. Even if these plans are non-binding, forcing companies to publish them is likely to nudge them into more sustainable behaviour.

And private sector climate initiatives continue to gain momentum. The Glasgow Financial Alliance for Net Zero (GFANZ), launched in April 2021 at the Leaders’ Summit on Climate Change, now includes 450 institutions, responsible for assets worth $130trn, all committed to supporting the transition to net zero.

The thorny problem of climate finance

One difficult problem in addressing climate change is how to apportion financial responsibility for the transition, especially that between developed and emerging economies.

Glasgow witnessed backtracking by advanced economies on an earlier commitment (reached in 2009 at the COP15 conference in Copenhagen) to mobilise $100bn a year in climate finance by 2020.

Instead, developed nations released a plan just before COP26 showing that this figure would likely be reached only in 2023.

Climate-vulnerable nations continue to call for greater support and the historical responsibility of developed countries in causing climate change has prompted calls for compensation. Litigation against the large historical emitters by climate-vulnerable emerging market countries seems increasingly likely in the years ahead.

Emerging markets are not only more vulnerable to climate change than wealthy countries (see the map), but they are also less able to adapt and deal with the fallout for financial, institutional and political reasons. A failure to address these structural differences is likely to intensify other problems, such as uncontrolled migration. 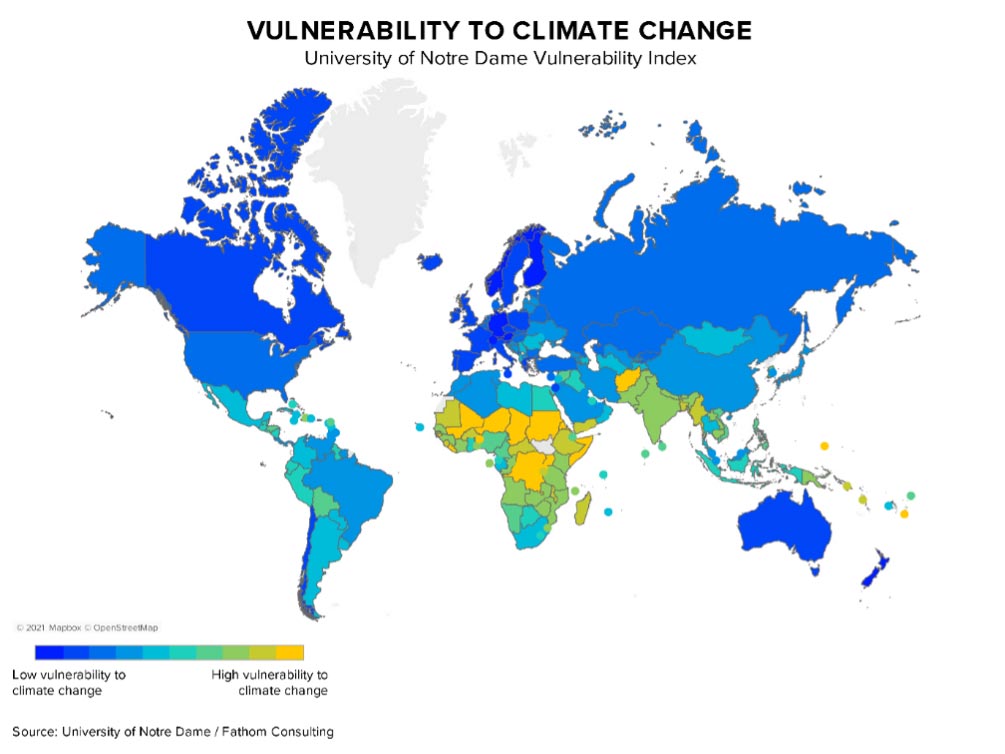 Winners and losers of COP26

Looking beyond this broad north-south divide, who are the winners and losers of COP26?

Assuming that the COP26 pledges will be matched by policy and action, those countries most vulnerable to climate change (in particular small island nations) can be considered the biggest winners.

Countries that will do well in the transition from fossil fuels to renewables (such as those with large deposits of minerals used in green solutions, as well as the owners of climate-related technologies) can also be considered winners.

Those countries with more work to do to decarbonise their electricity systems (those in the top-left quadrant of the chart below) are clearly more exposed to climate transition risks. However, the picture is far from black and white. 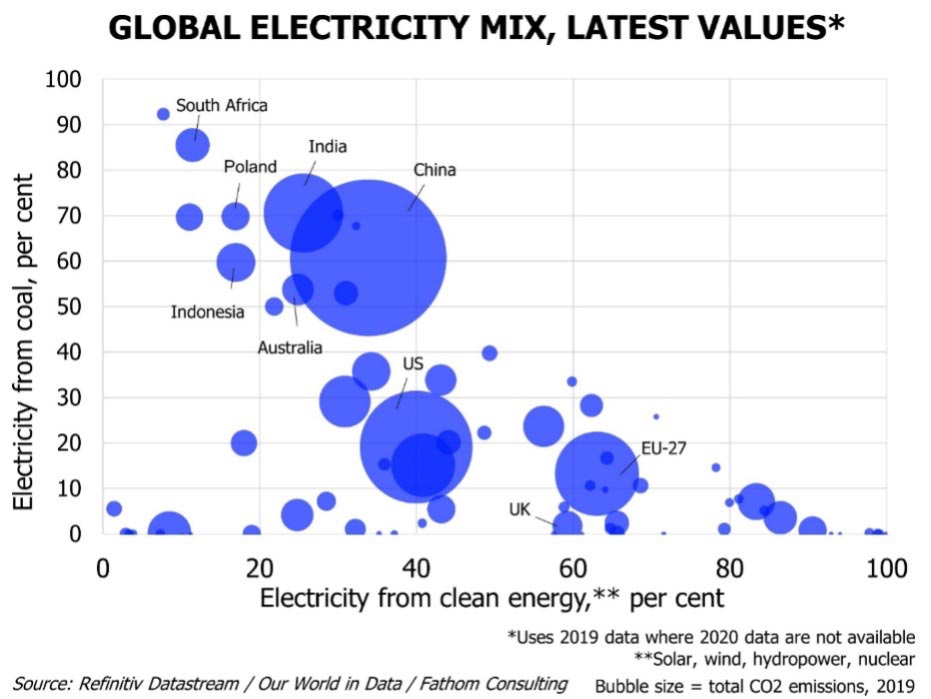 This is because the long-term benefits of switching to renewable energy are clear: electricity produced from renewable sources is in many cases cheaper than that generated from coal.

So while renewables require large up-front capital investments, as well as more expensive investments in grid infrastructure and storage, there will be a substantial future pay-off for those able to move away from a reliance on fossil fuels.

As an example of how economic incentives are playing an increasingly important role in driving the green economy, consider the price changes since the 2015 COP 21 conference, shown in the chart below.

The cost of batteries and renewable energy has roughly halved since the Paris Agreement was signed, while capital has poured into private sector green tech companies. 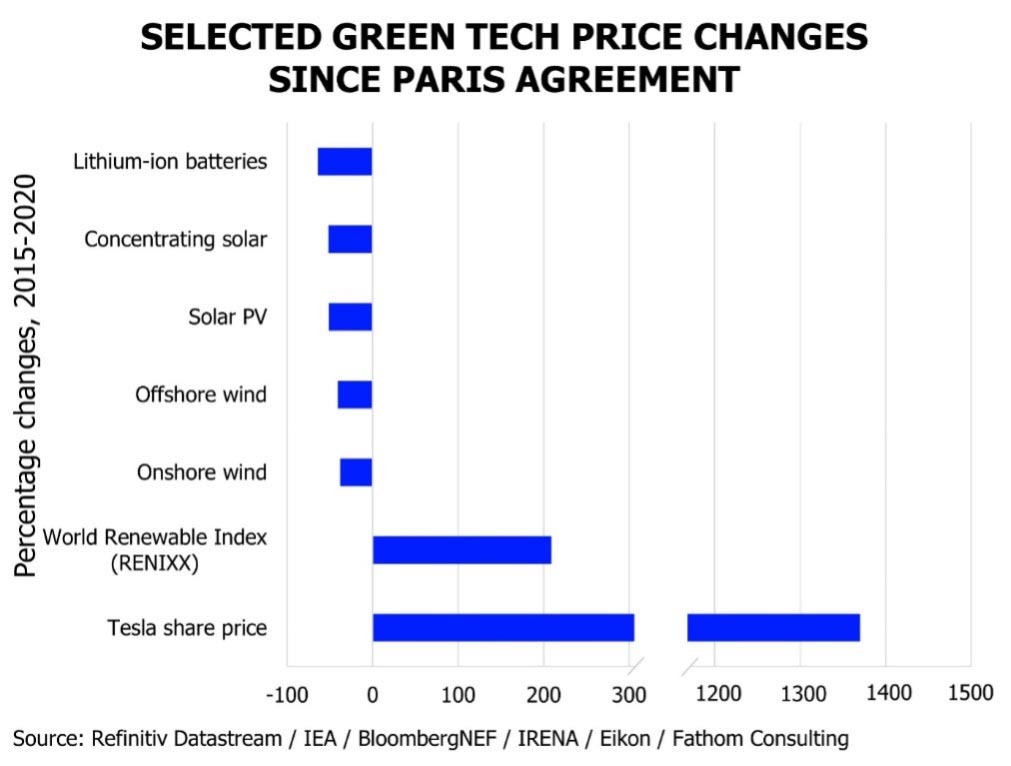 Looking beyond the political wrangling between nations, there’s one single reason for optimism post-Glasgow. It’s that self-interest, economics and finance are becoming increasingly aligned with the moral and scientific reasons to limit global warming.

For more on the winners and losers of COP26, read our white paper