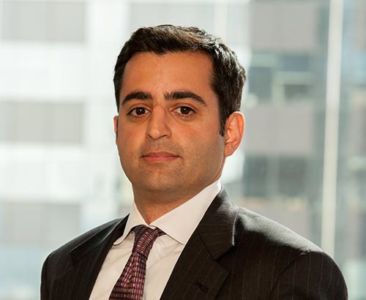 The natural gas price in West Texas has plummeted to the extent that drillers in Waha recently began paying customers to take away unwanted supplies. What's behind the negative pricing scenario in the Permian basin, and is there any prospect of the market rebalancing?

The shale oil and gas revolution in the United States has produced after-shocks in many different ways, ranging from the macro-economic to the increased frequency of mini-tremors in Oklahoma.

Gas is better than free only in the heart of the Permian basin, which recently overtook Saudi Arabia’s Ghawar as the world’s most productive oil field.

So how does a giant oil field in West Texas become famous for its negative natural gas price?

The major price point in West Texas is Waha, a hub for delivered natural gas which historically has traded at a discount to the Henry Hub national benchmark.

Since the shale-driven Permian production ramped-up in 2013/14, that discount averaged -15 cents/MMBtu (million British thermal units) for several years, but it ballooned to well over -$1/MMBtu in 2018.

Even though the Waha Basis has been negative, the Waha outright price itself had never fallen below zero. That is until March 25, 2019, with Platts reporting a low of ‑$5.79/MMBtu on April 3.

What fundamental trends have led to a situation where drillers have to pay buyers with pipeline capacity to take away their gas?

One clear answer is that the relation of supply and demand of natural gas in West Texas has tilted out of balance, mostly due to the unrelenting growth in associated gas output.

According to EIA data, natural gas production has grown by 266 percent since 2011 to 14 billion cubic feet per day (Bcf/d) – almost 16 percent of total U.S. gas production – with most of it from associated gas production (only about 0.5 Bcf/d originates from primarily gas-directed wells).

Latest data show that on average about 3.5 thousand cubic feet (Mcf) of associated natural gas is produced for every barrel of oil extracted in the Permian.

That means that for every barrel of oil, the cost of selling the associated natural gas at spot prices on April 3 would have reduced producers’ margins by almost $21.

At current WTI crude oil prices above US$60 a barrel, that still leaves producers a healthy profit margin given that reported Permian “break-even” prices are in the $20-25 a barrel range, according to Pioneer Natural Resources.

As a result, we do not see much chance of production shut-ins occurring due to the current spate of negative West Texas natural gas prices.

Gas production growth has accelerated in 2018, with almost 5 Bcf/d higher output since January 2018, nearly matching the prolific growth of the Appalachian region.

The big difference is that several big pipelines have increased takeaway capacity in the Appalachian region, allowing gas to reach markets in the Midwest, Canadian Dawn region, Northeast, and even be back-hauled down south.

In contrast, the Permian’s takeaway capacity has not kept up.

To the west, 3 Bcf/d of capacity limit flows to U.S.-Mexico export points in New Mexico and Arizona, as well as the Southern California market. Another 1.2 Bcf/d of capacity on Northern Natural Gas and NGP pipelines give Permian gas access to the Mid-Con region.

With capacity fully subscribed, even a small drop in available capacity can have an outsized impact on prices. The capacity reductions began on March 15 with an unplanned outage at EP-Ehrenberg at the SoCal/El Paso interconnect.

Although the maintenance issues precipitated the decline in Waha prices below $1/MMBtu, it was demand (or the lack thereof) that pushed it below zero.

Our daily econometric natural gas consumption model for the Southwest showed demand dropping more than 2 Bcf/d from March 21-28 and then again on April 3, closely matching the pattern of price dips below zero at Waha.

The two main drivers of the lower demand were a drop in the heating degree day (HDD) measurement (due to moderating temperatures) as well as increases in wind generation over the relevant time period. 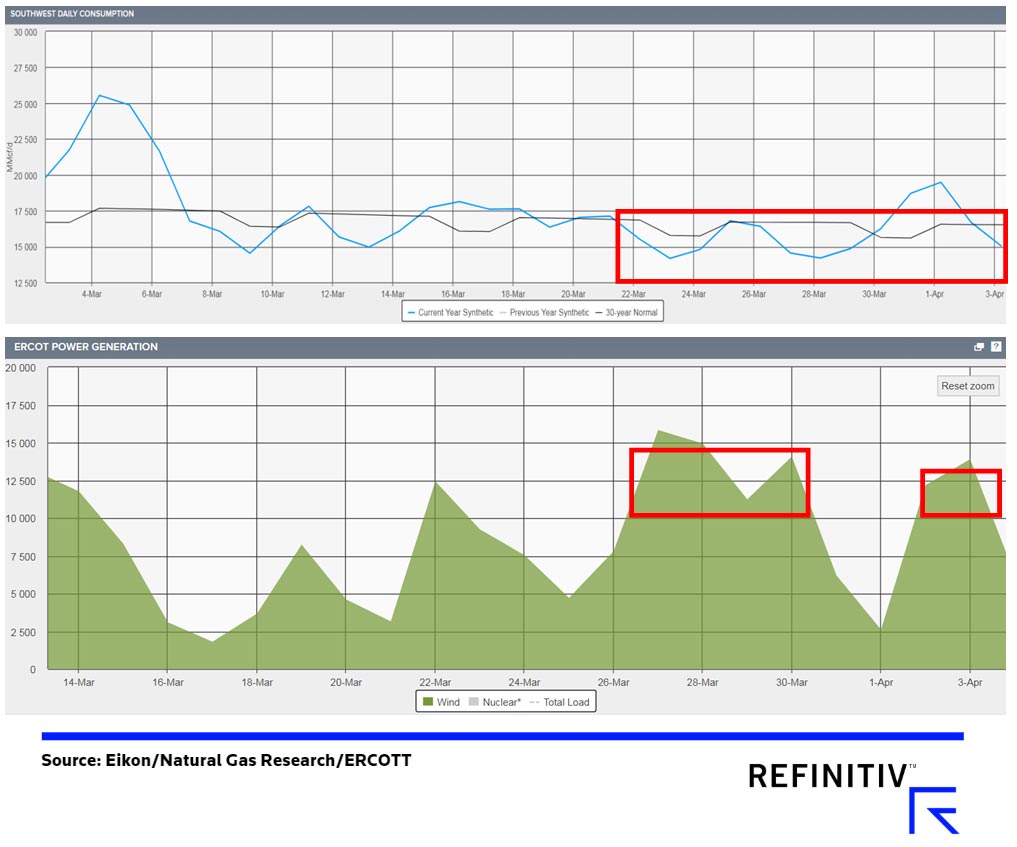 According to our modelling, the impact of increased wind generation (above 13 GWs) displaced up to 1,000 MMcf/d more natural gas demand over the March 26-30 and April 2-3 periods compared with the previous week.

If the forward markets are right, this was only a temporary blip and prices will recover, but only gradually (current summer Waha fixed-price trades below $1/MMBtu, while next winter is trading above $2/MMBtu).

There are three possible re-balancers of the West Texas natural gas market:

Pecos Trail Pipeline, a 1.85 Bcf/d capacity project by NAmerico from the Permian to Agua Dulce Hub and Corpus Christi on the Gulf is set for completion in mid-2021.

Meanwhile, Kinder Morgan is working on completing Gulf Coast Express, a 1.9 Bcf/d pipeline that runs a similar path, by Q4 2019.

This will surely alleviate the stranded gas problem in the Permian, but with the caveat that demand must also appear at the tail-end of these pipelines. The timing of LNG export expansion projects on the Gulf and infrastructure buildout in Mexico will be critical. 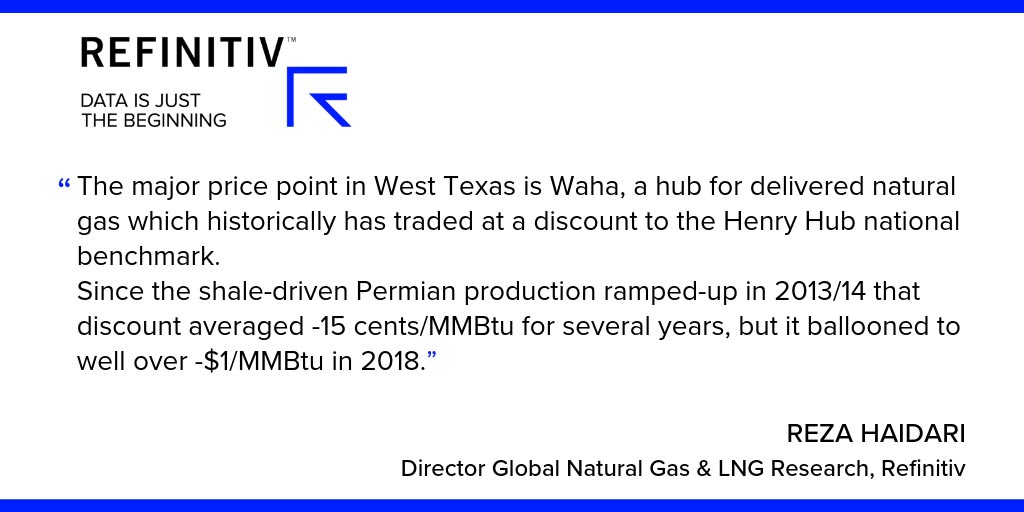 According to Rystad Energy, more than 500 MMcf/d of natural gas (four percent of total Permian production) were flared in Q4-2018, more than doubling the amount from a year ago.

The Texas Railroad Commission states that long-term gas flaring is not allowed unless it is proven that the producer is waiting for upcoming infrastructure.

However, it is uncertain whether large financial penalties are currently associated with increased flaring – whether that policy is strictly enforced could have a material impact on producers’ bottom-line and therefore their decision to continue producing.

The volatility in Waha prices is driven by many of these uncertainties. In 2019, we plan on integrating many of the impact factors covered in this blog into a complete supply-demand view of West Texas with real-time data updates informing our assessments of Waha spot and forward prices. Stay tuned to your Eikon. 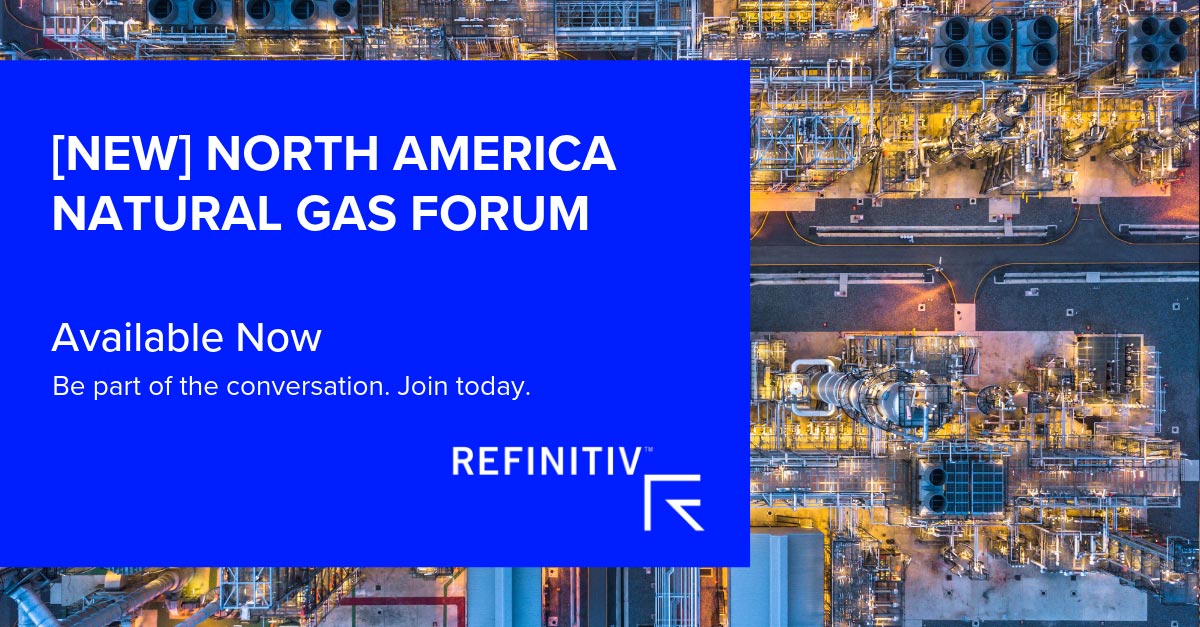