The volatility of volume in U.S. equities 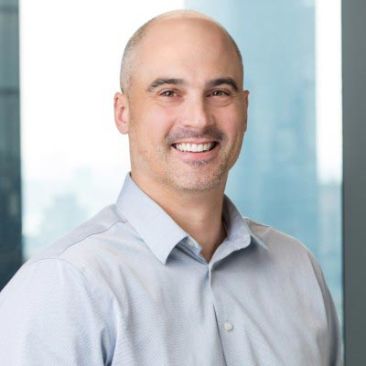 How much do the top five names in the large indices affect the overall performance?

To answer this question, I found that while the contribution of the top five companies was rather high when compared with an equally weighted portfolio, they did not have an excessive impact.

When there was smaller the number of the index constituents, for example the NASDAQ 100, the greater the top names overperformed their weights.

As a former trader, I wondered if these ratios might also be visible in the volume traded.

As I looked at volume, I realised that raw volume probably wasn’t the best metric to use. Lower-priced stocks would have a huge, outsized impact in shares traded, although they might not be trading as much in Dollar terms.

Volume volatility in the S&P 500 and the NASDAQ

In the S&P 500, the top five names by year end weight accounted for only 6.7 percent of total shares traded. That’s 37 billion shares against 555 billion for the whole index.

Apple is the one common thread. It traded both the most volume and had the most notional turnover, which is price x volume for each trade.

The top five names by volume alone were Apple, Ford, Advanced Micro Devices, Bank of America and AT&T. Each of those stocks traded north of 10 billion shares.

For index constituent turnover, I started with two of the smaller, by ticker count, indices.

The NASDAQ 100 was nearly spot on. The top five names were 46 percent of the index performance and as shown in Figure 2, 45 percent of the total index turnover.

I asked myself: “So what? Why would anyone care about this?”

I next analysed how volatile volume was on a daily basis.

During the last week of December, much of the trading community was on a holiday break. The average S&P 500 constituent traded about 57 percent of its average daily volume (ADV) for the last year during that last week.

Analysing volume volatility in the Russell 3000

For the Russell 3000 names, it was a bit higher. The average name traded about 70 percent of its average day, but the median here was closer to the S&P results at 59 percent of the ADV.

The average in the Russell 3000 was impacted by a few biopharma names that traded north of 10x their normal volume on some news. As shown in Figure 3, the names in that industry group are quite volatile.

The volume during the week between Christmas and the New Year is usually on the lighter side. However, the daily volume can be quite volatile.

I looked at the most volatile names by volume using the year end Russell 3000 index constituents.

In Figure 3, the last set of data is the true value in these reports. This section shows the variation around the trailing 20-day average. It incorporates some of the same data points as the previous data set, but because here the deviation can be a positive or negative, the absolute value numbers are also included.

Some companies feature in top ten names traded by both volume and turnover.

Appearing in both lists, Apple is both the second-most traded by volume and total value.

Meme stock AMC was the top-traded by volume, but it looks like it barely belongs in the top ten by turnover value. It is about 15 percent of the top turnover name, Tesla.

Even these mostly mega-cap names have a ton of variability when trading around their 20-day average. Every name in the top 10 has an absolute mean deviation from the 20-day trailing average of more than 20 percent. I’ll touch more on this metric below.

Figure 4 shows same data fields, but the top 10 names by volatility of volume and turnover.

The table is ranked by the coefficient of variation of the daily numbers. Both lists are all biopharma names. This isn’t all that unexpected. The pharmaceuticals, biotech, and life sciences industry group has the largest number of names in the Russell 3000.

How does volume vary by industry group?

In Figure 5, the index turnover on an industry group level shows that even though the pharma, biotech and life sciences industry group accounts for 14 percent of the total names – with 442 companies – it’s nowhere near the top in terms of market cap, where it ranks 21st of the 24 TRBC industry groups.

The standout data point in this view is automobiles and components, which is only 2.7 percent of index market cap, but almost 7.5 percent of the total turnover.

This is mostly supported by Tesla’s outsized turnover, but Ford and GM are also in the top 100 for turnover. Plus, Rivian’s late-year explosiveness ranks it at 131 in total turnover in only two months of trading.

Volume volatility and the 20-day average

In Figure 6, we look at the deviation from the 20-day average volume.

Most traders use a 20- or 30-day historical look at volume to see how much a stock has been trading. Here, we’re using 20 trading days.

The numbers were a bit shocking to me. While the upside can get quite large, the downside deviation is limited to -100 percent. That’s one limit to this. Taking that into account, I think this is still valuable.

Looking at the top 10 names sorted by the average absolute values, it means if the volume was 20 percent lower than the average instead of -20 percent, it shows 20 percent. I’m just looking for the biggest differences.

Many of these in the overall top 10 have not traded for more than a few months.

Adagio Therapeutics has been trading for about five months. It has one giant volume spike in mid-December, then trades about 90 percent less than the 20-day average for the remainder of the month. 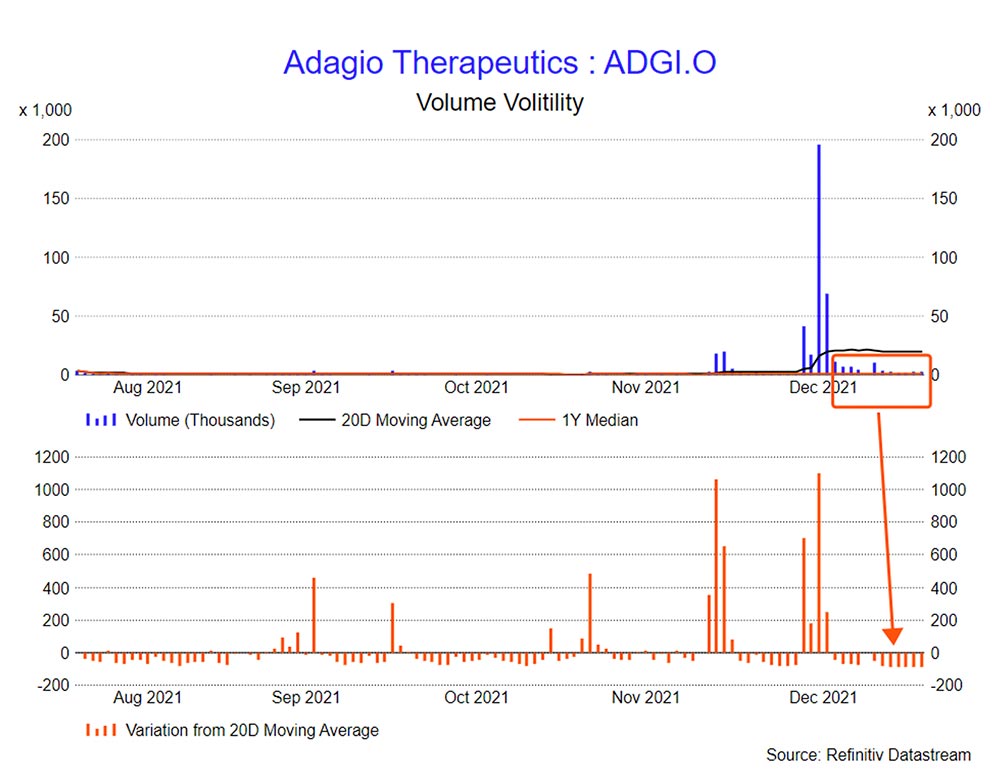 In the first table in Figure 8, because small caps dominated the top 10, a filter for large cap names was employed. Even in larger names there was a ton of volatility in the daily volume.

It’s no surprise to see GME and AMC high on this list. However, the presence of Clarivate, McAfee, Doordash, and Rivian indicates that this list would be dominated by the meme stocks.

In the second table in Figure 8, the filter was changed to only include mega caps with a market cap over $100B. Even then, there is still a large amount of volatility around the 20-day average.

IBM was the biggest surprise in this list. It averages a 33 percent difference in either direction from the average. It also has a 23 percent median difference.

Blackstone also appears (Figure 9). It had a rather high max difference of 585 percent, so for the next 20 days, the stock only traded about 50 percent of its 20-day average.

Why is that important? 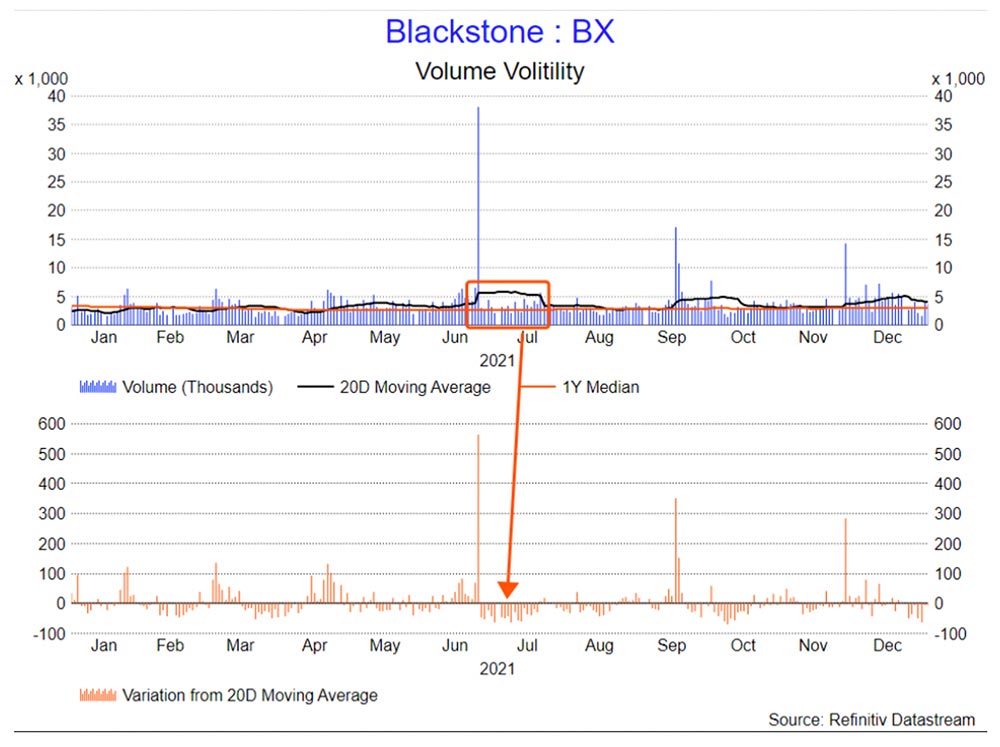 Many pre- and post-trade analytics that gauge risk and performance of putting a trade on use a standard trailing 20- or 30-day average volume in their inputs.

If you use a trailing 20-day average volume as an input, you might be exposing yourself to some issues. Even if you have a more complex formula that gives more recent volume a higher weight and decays the weights of more historical data, there still an impact of using this somewhat stale historical data.

Figure 10 is the volume for S&P 500 constituents on 6 January, showing the volume at time versus a 20- day average.

This is as of about 2.30pm Eastern. Humana (HUM) is the top name, trading about 15x the trailing 20-day average volume.

If you were looking to trade 500,000 shares of HUM today, you’re more likely to have an easier go of it versus what you would have in the previous 20 days. This wouldn’t show up in too many pre-trade analytics.

Most trading cost analytics solutions are static or focused on post-trade reporting. Our analytics will provide a real-time agile platform that embeds standard analytics, like instrument-level statistics and execution benchmarking with the ability to integrate custom analytics for orders and trades.

You can easily add custom analytics, which are open and extensible via Python. Right now, we’re focused on improving the framework for viewing this data.

The next step will be incorporating intraday-dynamics of volume (such as predicted volume), volatility and spread, and predict those dynamics using machine learning.

We’ll then use these intra-day predictors as featured inputs to refine our impact model. Figure 11 shows a few of the windows in early versions of this platform. 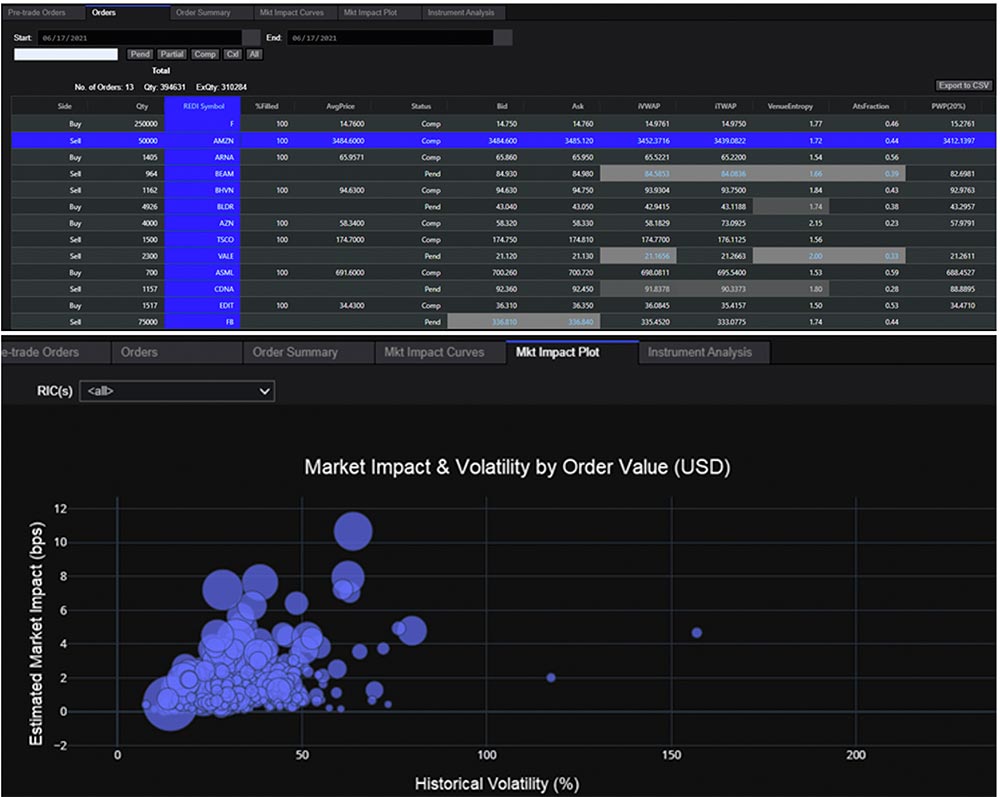 All data is in reference to 2021 trading or performance and sourced from Refinitiv Eikon and Refinitiv Datastream.

Simplify your workflow to trade smarter and faster with REDI EMS - the broker-neutral, multi-asset execution management system that can give you a competitive edge

How often are the big names in equity indices traded?

In the S&P 500, the top five names by year end weight accounted for only 6.7 percent of total shares traded.