The Rugby World Cup is expected to attract half-a-million foreign visitors and generate US$2 billion in additive value for Japan’s economy. Alongside these financial benefits, will the country’s Brave Blossoms also inspire a new generation of rugby lovers?

Like any host nation, Japan will be looking to showcase its vibrant culture and everything that is good about the country as the world watches on for this year’s Rugby World Cup.

After a pulsating start to the tournament and the launch of the Global Sports Forum, we have taken a look at the World Cup’s potential boost for Japan’s economy and the longer-term plan to grow the game in Japan and develop a new generation of rugby lovers.

Using Fathom Consulting charts via Eikon, we’ll assess these trends from previous World Cups, the issues Japan is facing, and the long-term benefits of hosting such a great event.

Hosting a major sports tournament takes huge investment in new infrastructure and architecture, with the spending on transport and accommodation already well-documented. Japan is also the first Asian nation to host the Rugby World Cup, so it’s a prime opportunity to reintroduce Japan as a country capable of hosting major sporting events.

There will be around half-a-million foreign visitors attending this year’s Rugby World Cup, with many visiting Japan for the first time. This is a great chance for Japan to boost its tourism advertising and attract the millions of international television viewers who may be potential travellers.

Providing an unforgettable experience for the duration of their stay will be key to maximizing contributions to GDP growth, particularly at a time when the world’s third-largest economy is struggling with the repercussions of the U.S.-China trade war.

Adequate accommodation and entertainment will be imperative in satisfying visitors and enhancing the potential of return visits in the future.

In general, match attendances for the Rugby World Cup have projected a steady rise over the last 20 years. Figure 1 illustrates rugby’s growing global fan base and audience. Japan will be looking to appeal to this growing market in several ways. 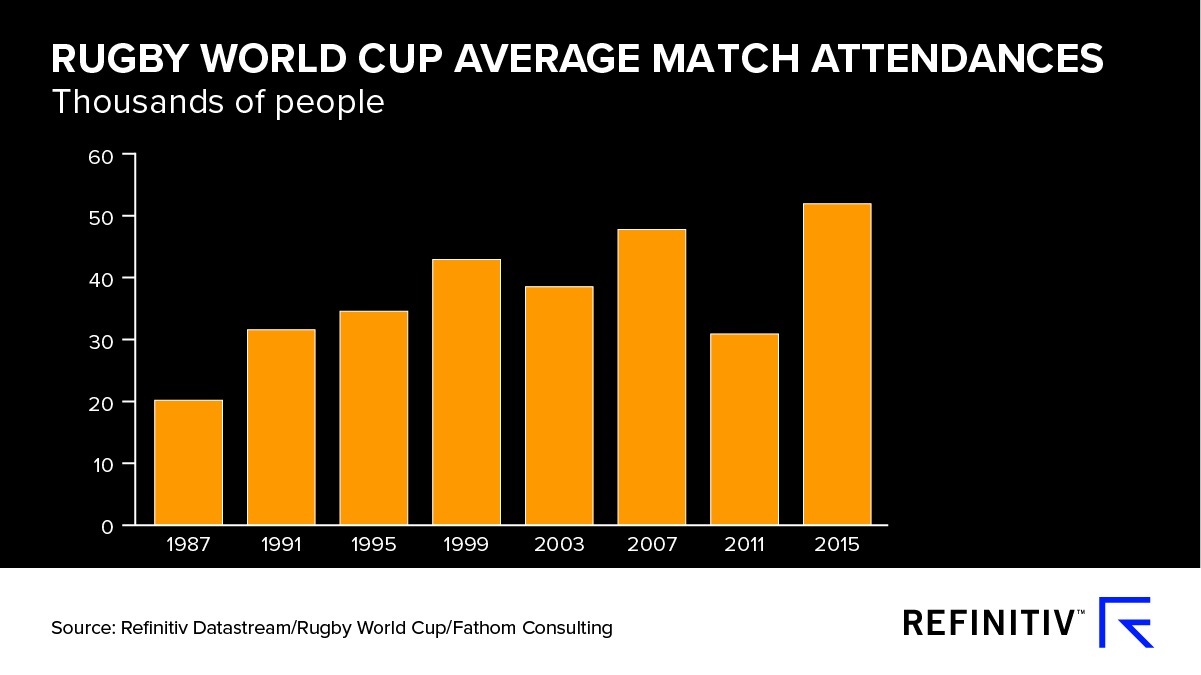 When it comes to watching the matches in stadiums, it is customary to have plentiful food and drink. According to The Rugby Paper, fans consumed approximately 1.9 million liters of beer at the venues and in the fan zones at the 2015 World Cup in England.

These consumption habits do not look like they’ll be decreasing. There is a reason why Heineken has increased capacity by 80 percent in and around the grounds. 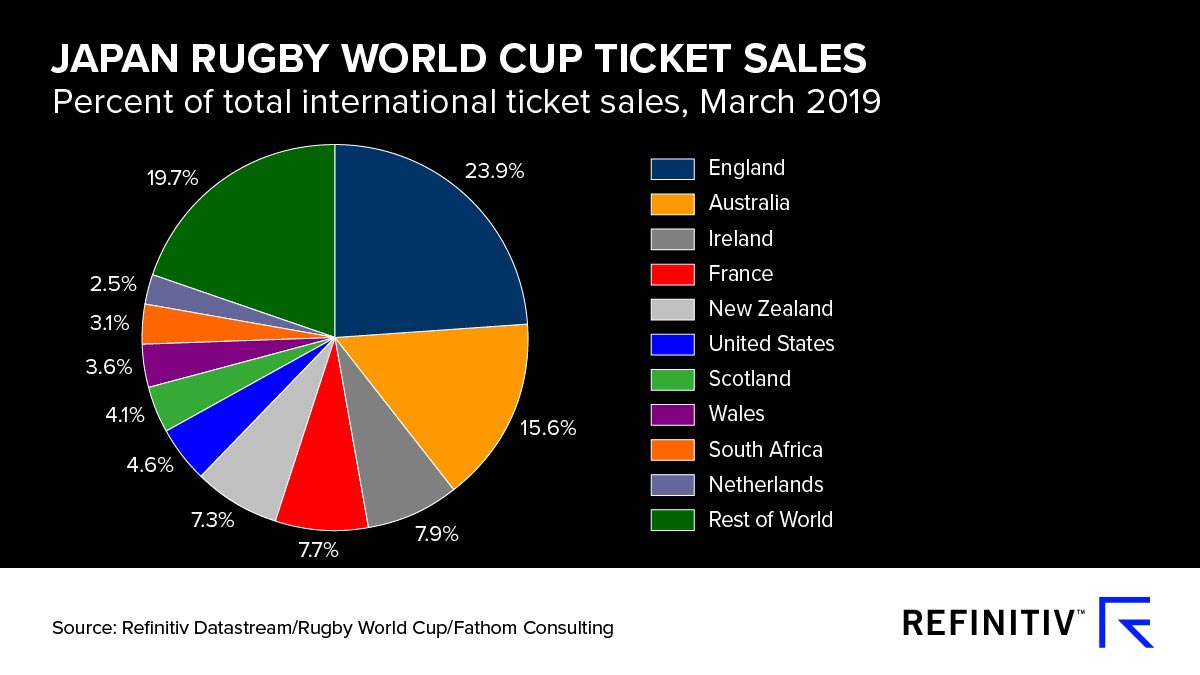 On average, it is predicted that 100,000 cups of beer could be consumed per match. Our ticket sales chart suggests that nearly 50 percent of all tickets have been sold to fans of Australia, England and Ireland.

To put that into perspective, these three countries drink up to three times as much as Japan on average, so managing high demands will be imperative to a successful tournament.

Organizers have had to lift the ban on fans taking food into the venues after just three games, due to complaints about the lengthy queues and food shortages inside the grounds. All stadiums now include beer hawkers so that the fans can get their food and drink with minimal queuing.

It is encouraging to see how quickly the officials addressed these issues. However, keeping these to a minimum will be a top priority when ensuring fans have the best possible experience in and around the stadiums, especially with the 2020 Olympics just around the corner.

Organizers will also want to generate interest and grow rugby domestically, providing a platform for men, women, girls and boys to experience the game. Japan exploded onto the rugby scene when the Brave Blossoms famously beat South Africa at the 2015 World Cup.

In addition to this, and arguably even more famous, was their win over Ireland in this year’s tournament. This result sent shockwaves through the rugby community, exploding the tournament into life as Japan look increasingly likely to make the knockout stages.

Colossal moments like these can only help endorse rugby and create excitement throughout Japan. World Rugby’s recent report illustrates the desire to grow the game in Japan, with initiatives such as ‘Impact Beyond 2019’ being a driving force in their strategy.

However, the organizing committee’s own research suggested that two in five people still haven’t heard of rugby in Japan. One would think that hosting the World Cup can only increase this number, and the success of the Japanese team could have huge repercussions for the long-term development. 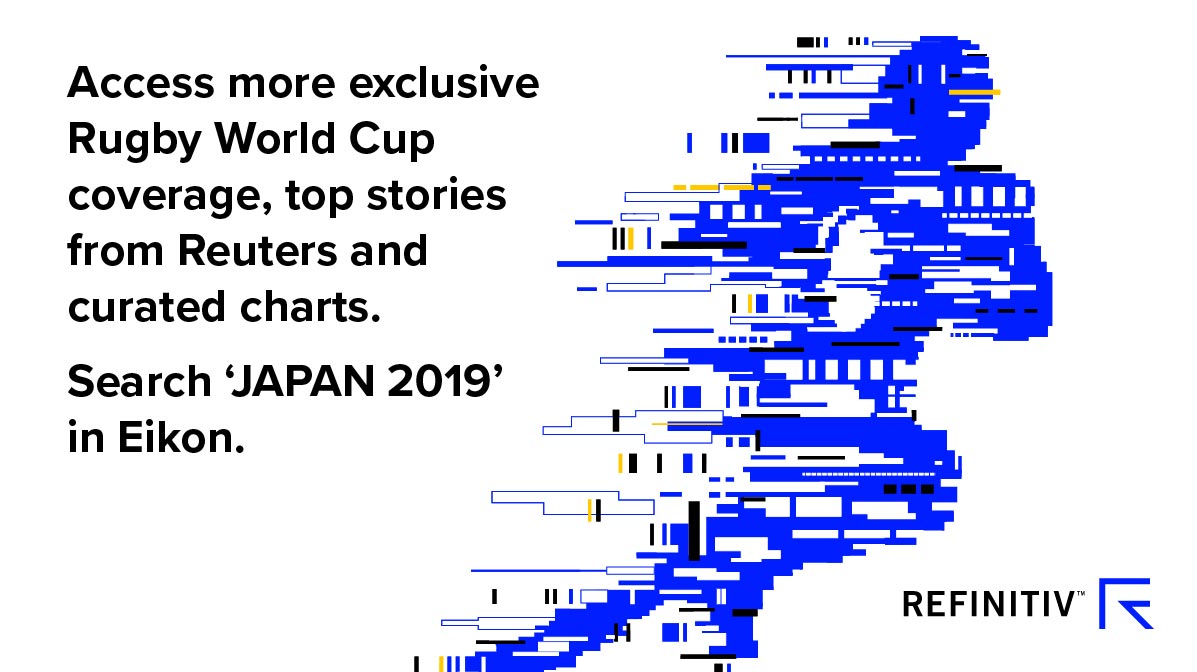 As well as the benefits for participation, a report last year predicted that the World Cup’s impact on Japan’s economy was expected to be in the region of 216 billion Japanese yen ($2 billion).

The Japan National Tourism Organization (JNTO) also wants to grow inbound tourism by 30 per cent to 40 million by 2020 — a significant increase compared with 2017. JNTO launched a multilingual promotional campaign to attract Western tourists in the hope they could drive tourism growth for years to come.

Organizers will be pinning their hopes on foreign visitors and whether Japan can offer attractive and suitable services that encourage people to stay, spend their money and potentially visit again.

The task of appealing to a domestic audience will also be an important factor to success, and initiatives like ‘Impact Beyond 2019’ will all contribute to growing rugby in Japan. It will be interesting to see if the Japanese team can get to the knockout stages, as this could play a crucial role in shaping the long-term future of Japanese rugby.

What are the benefits to Japan's economy from hosting the 2019 Rugby World Cup?

An economic impact study revealed that the 2019 Rugby World Cup will deliver a boost for Japan's economy totaling an estimated 216 billion yen (US$2 billion).