In a challenging macro-economic and political environment, deal makers suggest a cautious optimism for M&A and capital markets in 2019. Matthew Toole, Director, Deals Intelligence, presents highlights of the survey.

A survey of 470 M&A and capital markets professionals and executives across 53 countries — conducted between November 2018 and January 2019 — has provided a broad and deep quantitative assessment of the outlook for capital markets in 2019.

The Refinitiv Deal Makers Sentiment Survey, in partnership with Greenwich Associates, offers some reassurance on M&A and capital markets activity in the face of increasing market turbulence. 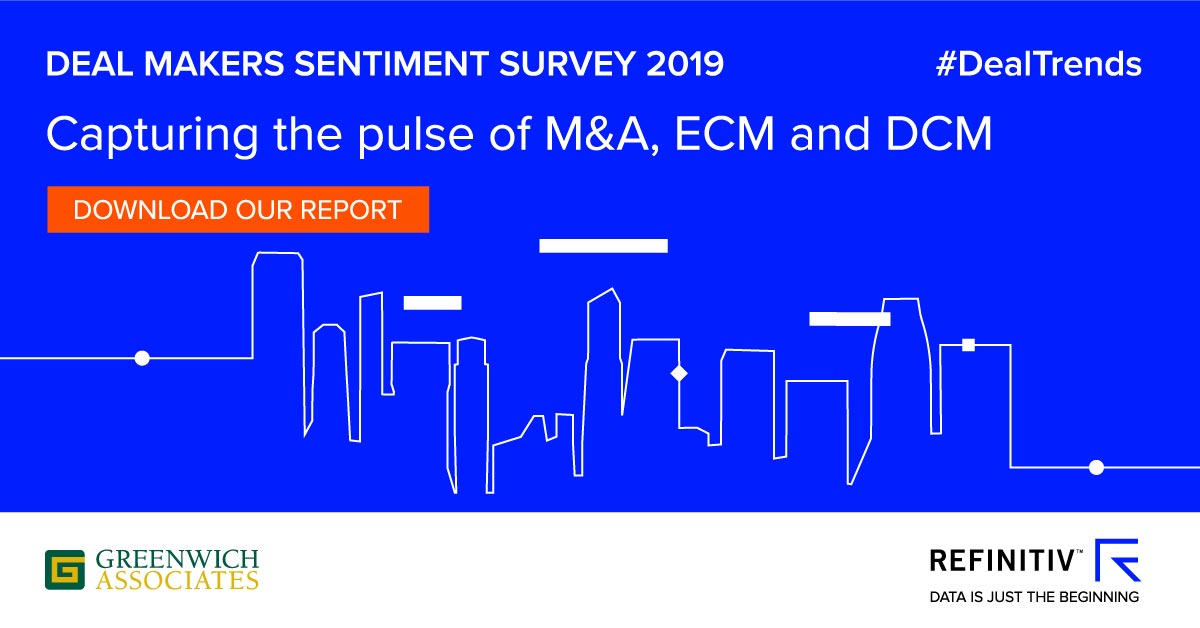 A crop of big-ticket M&A transactions helped push the aggregate value of transactions above US$11 trillion in 2018, despite year-on-year falls in equity and debt capital markets of 12 percent and 8 percent respectively.

Now deal makers suggest that such a level is broadly sustainable despite significant macro-economic uncertainty, as we move through 2019.

There is reason to take them seriously. Last year, respondents predicted an 18 percent growth rate in global M&A, very close to the actual growth of 20 percent, hitting an all-time high of $4 trillion in corporate acquisitions.

Even so, in purely growth terms, this year’s predictions are much more cautious, with expectations broadly flat for global M&A at -0.2 percent, and only modest growth anticipated for equity capital markets (1 percent) and debt capital markets (1.5 percent).

Recession is ranked as the leading risk and in the top three by 56 percent of respondents, up from 51 percent last year, with U.S. respondents being the most concerned about an economic downturn.

M&A professionals take a huge number of factors into consideration in assessing the prospects for deals.

Keeping up with the competition and the effect of a market downturn rank highest, with monetary policy, changing U.S. trade policy and private equity activity among the higher-ranking factors.

Interestingly, while the headline predictions for M&A are subdued, when commenting on their own sectors, deal makers were much more bullish, with technology, healthcare and energy expected to have particularly strong years.

The mismatch may suggest that while overall macro-economic sentiment is strained, the fundamental impetus for getting deals done on-the-ground, remains robust.

That could be good news as corporates start to care more about their own fundamentals, with revenue and profitability top priorities for 2019.

Half of corporate respondents are pursuing deals to expand the scope of their product offerings (up from 31 percent last year). Meanwhile, 40 percent of corporates intend to increase capital expenditure further, to support organic growth.

Bearish prospects for M&A in Europe

In Europe, deal makers are most bearish about the prospects for M&A, with a predicted 2 percent fall, and most bullish about ECM, with an anticipated 2.6 percent increase.

In Asia-Pacific, DCM deal makers are particularly bullish with predicted growth of 6.4 percent driven by energy, consumer and retail sectors. Meanwhile, U.S. deal makers take a very reserved view across the piece, with between flat and 1 percent growth expected.

There is no sign of complacency about the risks facing the global economy. About two-thirds of deal makers expect Brexit to make UK companies less attractive acquisition targets.

And there are no clear beneficiaries of this, as only a third of respondents believe that European companies will become more attractive acquisition targets as a result. Notably, concerns around US trade policy were also most pronounced among deal makers in EMEA. 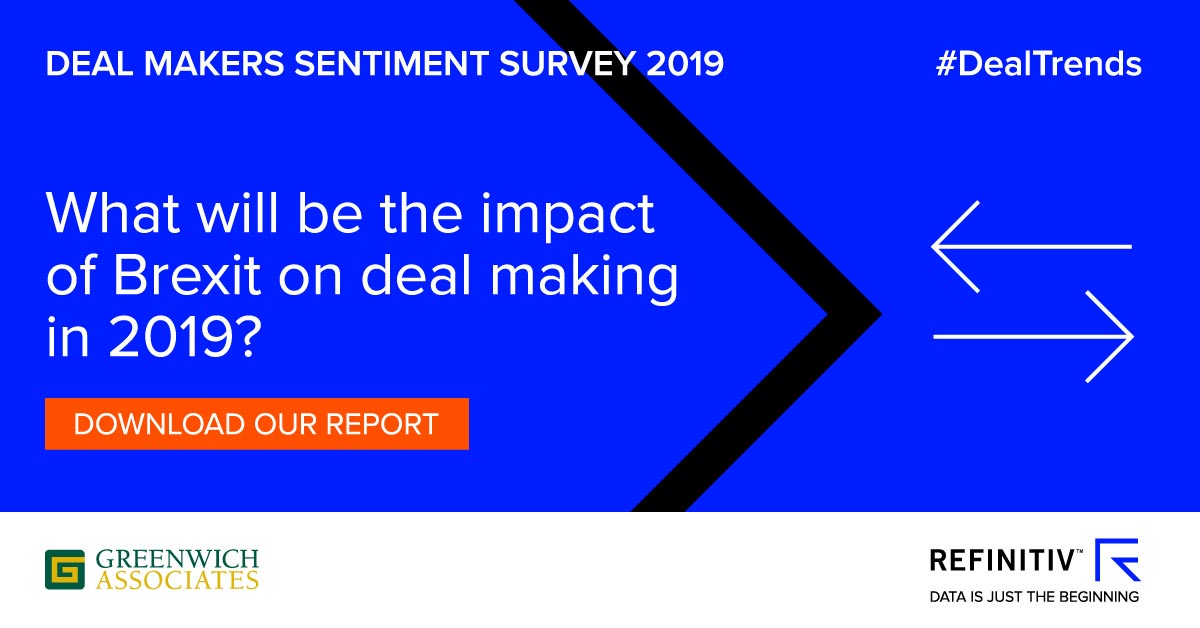 However, the relatively bullish stance of deal makers is not predicated on a general rising tide or accommodative policies, but on all-weather, hard-nosed, company-specific rationales that directly support the commercial and financial objectives of corporations. On that firm basis, the message from the world’s deal makers is one of cautious optimism. 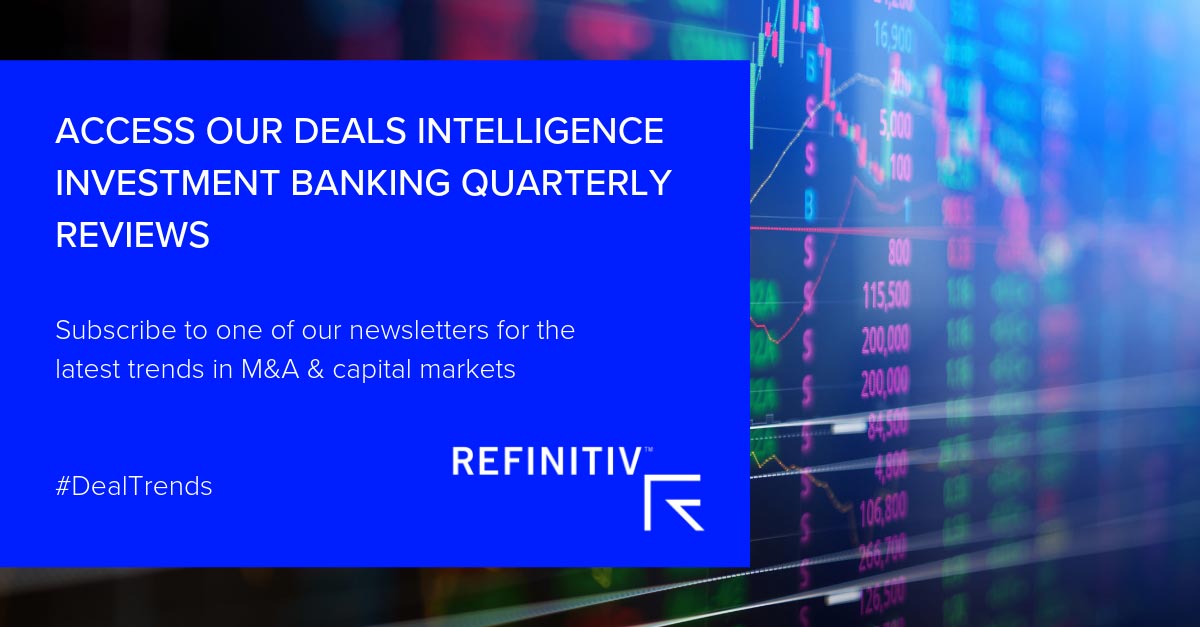 Advise your customers and gain an edge over your competitors. Eikon meets M&A, DCM, and ECM workflow needs on both your desktop and when you’re on the move with our mobile solutions