Why dealmakers have great expectations for 2018

In 2017 global deal making surpassed expectations, with M&A above US$3 trillion for the fourth year in a row. Will 2018 also exceed expectations? Matthew Toole, Director, Deals Intelligence, presents the highlights from our survey of dealmakers – a broad and deep quantitative assessment of the prospects for M&A-related and Capital Markets activity in 2018 across all major sectors and geographies.

Dealmakers are upbeat about the prospects for M&A in 2018 across most metrics, regions and industries, despite the highly uncertain macroeconomic outlook and high asset prices.

Learn how Eikon provides easy access to trusted news, data, and analytics, all filtered by relevance to your exact needs

Ninety-five percent of the 275 global dealmakers we surveyed said corporate merger and acquisition activity in 2018 would at least hold up against the previous year.

For U.S. dealmakers, that would mean a return to the heady days of 2015, when deal volumes bounced back from their post-financial crisis doldrums.

But for those in Europe, it would mean a notable recovery from the relative paucity of activity experienced since the mid-nineties.

A certain bullishness is probably part of the job profile for your average rainmaker, but corporate fundamentals would seem to support such a sunny disposition.

Sixty percent of survey respondents said they would use it to make acquisitions, compared with 45 percent citing dividend payments as a top priority.

And they are not put off by pricing.

The average acquisition multiples equalled an all-time high of 14.4 times EBITDA in 2017. Yet almost half of corporate dealmakers intend to acquire undervalued assets.

Perhaps that is why corporate respondents, in such a fiercely competitive market, say the most important aspect when assessing an adviser is sector expertise, a fact that coincides with a long-running increase in the share of M&A fees taken by boutique advisory firms.

Over the past few years, boutiques have increasingly taken share from the bigger players, and this trend is not about to change. 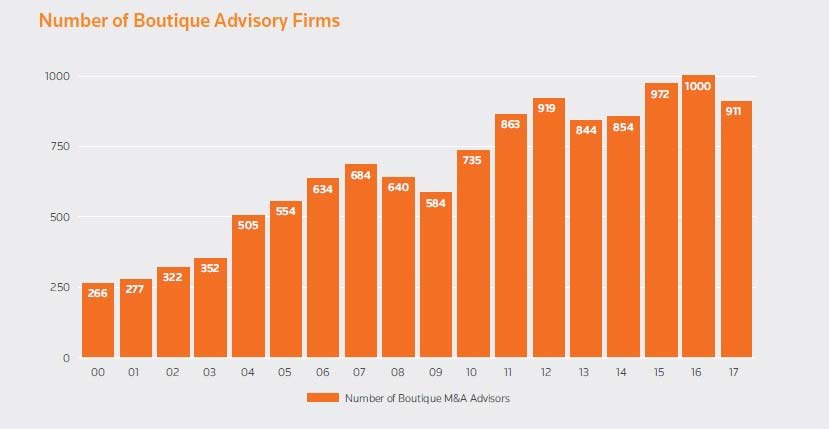 In a market dominated by such ‘strategic premiums’ you might expect financial buyers to be priced out of the market.

However, arguably the regional story to watch in 2018 is Europe, where dealmakers seem to be banking on a cyclical upturn and the continent is playing catch-up with the U.S. M&A recovery that it missed out on during the middle of this decade.

This will partly be driven by greater perceived value remaining in Europe, with 44 percent of respondents saying lower valuations will drive value-based deals, compared to just 14 percent of American respondents.

There’s also a need for European corporates to put unused cash to work and get back in the global competition for assets.

Europe also has idiosyncratic M&A drivers, such as increased government regulation, cited by more than half of European respondents, a topic that barely features in other regions.

When it comes to capital markets, M&A professionals seem to be betting on the continued strength of the global economy during 2018, while downplaying any concerns that inflation will overshoot.

Practitioners are relatively sanguine around long-tail risks, with fears of recession higher in developed markets, and concerns around an ‘unforeseen economic event’ notably higher in Asia.

It should be noted that the survey was carried out during December and early January, so respondents did not have the benefit of witnessing the stock market swings and valuation volatility in February.

But with equity performance increasingly tied to strong corporate earnings, such volatility could be as much opportunity as threat.

Whatever the wider macro-economic worries, corporates will keep competing. Any delay can be a risky strategy if it means you get left behind. Indeed, being over-cautious seems to be the one risk that nobody wants to take.

We’ve compiled all the recent analysis from our Deals Intelligence team along with expert commentary from Reuters Breakingviews, so you can be better informed. Download the reports here:

We have the data, research, news and commentary that will give you the edge in a rapidly evolving corporate landscape.

Stay informed and better advise your clients with our investment banking tools and in-depth information.

Whether it’s corporate strategy and structure, equity and debt capital-raising, new business opportunities, or M&A, we can help you find the global financial information you’re looking for.