In response to COVID-19, the Federal Reserve and other central banks unleashed huge emergency monetary stimulus programs. We analyze the impact of this stimulus on global capital markets and how it has contributed to a record-breaking H1.

Global capital markets have enjoyed their strongest ever six-month period in the first half of 2020, raising US$5.5trn globally, a 35 percent year-on-year increase, and the highest figure since records began in 1980. The number of offerings exceeded 130,000 for the first time ever.

U.S. investment-grade issuers were major drivers of activity, surpassing 2019’s full year total to raise US$1.2trn before the summer, while breaking weekly, monthly, and quarterly records on the way.

Despite a near market shutdown, global high-yield was also up 22 percent year-on-year, to a six-year peak of US$251bn.

Refinitiv Workspace enables you to access unmatched financial data, news and content coverage in a highly customized workflow experience built just for you

The Fed also announced that it will invest US$2.3trn in loans to aid small and mid-sized businesses, and state and local governments as well as fund the purchases of some types of high-yield bonds, collateralized loan obligations and commercial mortgage-backed securities.

International bond offerings rose 38 percent to a record US$3.1trn, with Germany, France and the UK accounting for more than one-fifth of total issuance.

All industries saw double-digit issuance growth. Retail sector issuance saw a triple-digit increase in in the first quarter, and there were significant issuance increases in Q2 among media and technology companies.

Global equity capital markets raised US$447bn in the first half of 2020, the highest amount since 2015, and a 41 percent year-on-year increase.

Issuers of secondary market paper were the main beneficiaries.

There were 500 offerings in June globally, an all-time monthly record, which raised US$296bn, a 66 percent increase on the amount raised in H1 2019. Convertibles were also popular, raising US$94bn — their strongest showing since 2007.

Global IPOs were down 21 percent compared with the same period last year, a four-year low, with U.S. listings down by one-third. This was partially off-set by Chinese domiciled IPOs raising US$23bn — a two-year high.

It should be said that global IPOs were back-loaded, with June’s US$18bn in proceeds twice that of May, and three times that of April.

Meanwhile, global M&A suffered steep declines in activity across the board, with global deal making down 41 percent year-on-year, to US$1.2trn. 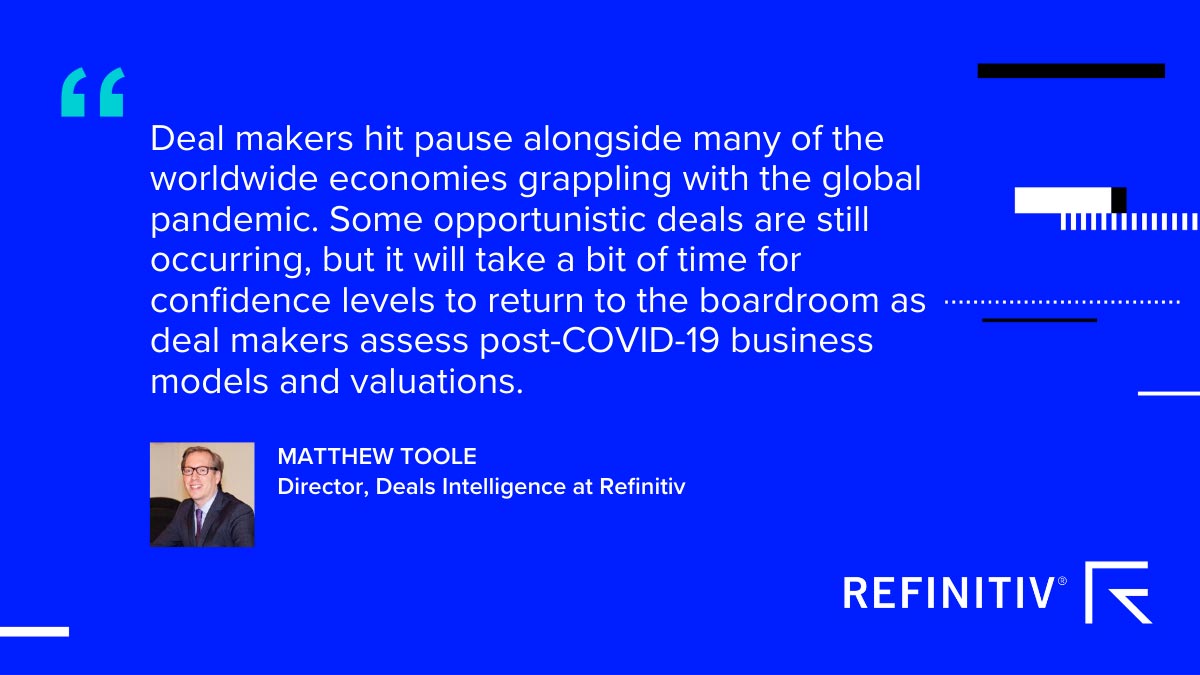 Deals with a U.S. target saw the steepest fall of 69 percent to US$355bn, bringing the share of U.S. deal-making to 30 percent, which is the lowest on record. Asia-Pacific deals were down 8 percent compared with H1 2019, to US$311bn, a seven-year low. This was barely offset by a 3 percent uptick in Japan to US$39bn.

In contrast, European M&A jumped 37 percent and included five of the ten mega deals — although this was led by the paper-shifting US$107bn Unilever share unification.

Overall, global mega deals (above US$1bn) were down 62 percent, year-on-year.

The big M&A winners so far in this crisis are private equity acquirers, which have increased their share of activity to 17 percent of total global M&A, despite the value of such private deals falling by nearly a quarter, globally.

Refinitiv Workspace for Investment Bankers: Know first, so you can act first, helping you to put your clients first — in the office or while on the go

Experience a powerful, smart and customer-centric solution designed to inform the investment banking community at all times. Know first, so you can act first, helping you to put your clients first — in the office or while on the go