Lessons from IPO activity in 2019

IPO activity in 2019 has been far from dull, with proceeds of US$42 billion and no shortage of high-profile flops over the first three quarters. Matthew Toole, Director, Deals Intelligence, joined IFR senior U.S. Editors, Stephen Lacey and Anthony Hughes, for a webinar to discuss the lessons for equity capital market participants.

It’s been a significant year-to-date for IPO activity, with just 100 new listings managing to raise more than US$42 billion on U.S. exchanges.

While Uber and Lyft accounted for a big slice of these proceeds, they were also among a string of high-profile IPO failures.

All this comes with the stock market up more than 20 percent over the calendar year. The lesson seems to be that investors are discerning, and while the U.S. Federal Reserve remains somewhat dovish the market should hold up. 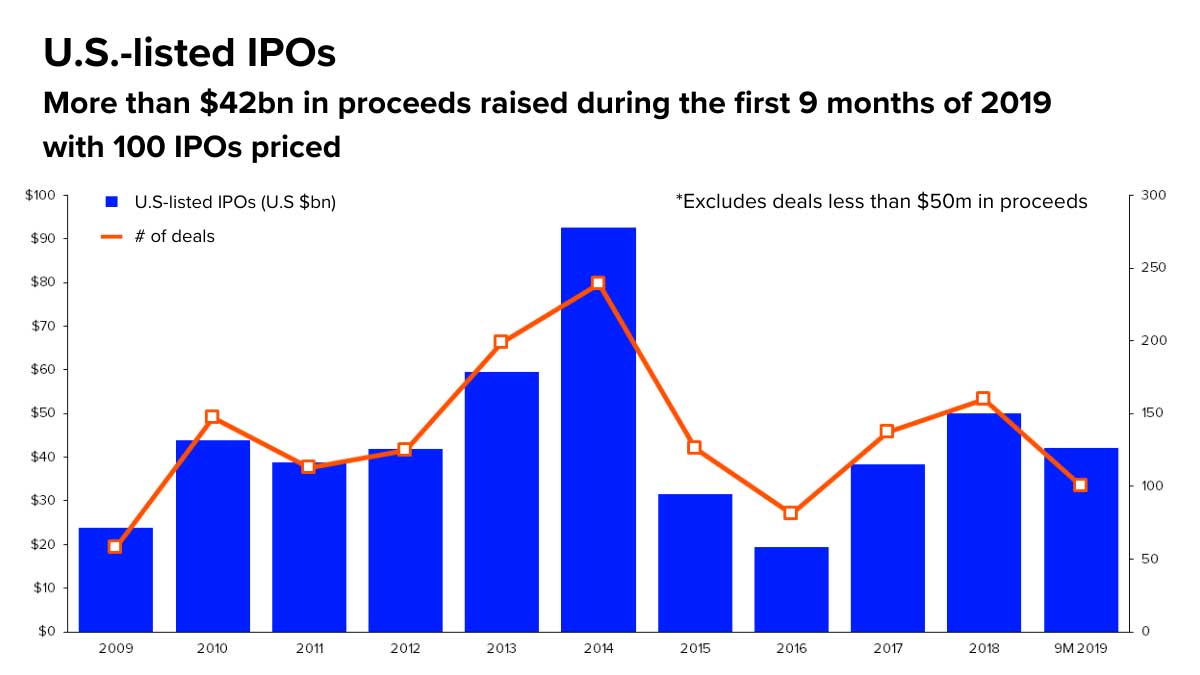 The power of private capital

Not much makes sense in equity capital markets these days until you factor in the influence of private capital.

For instance, it’s difficult to isolate technical factors behind IPOs such as Lyft, Uber, and Pinterest — all companies that had raised substantial capital privately.

Many investors in these large private syndicates are not subject to the customary 180-day lock-up, precipitating some extreme selling by investors who invested in early private rounds and affecting prices technically.

We are witnessing the power of private capital investors in public markets in full force.

Overall, the performance of IPOs during 2019 has been weak. The extent of losses from some of the larger IPOs on investor portfolios has been substantial.

This has been partly due to an old fashioned revaluation.

Application software businesses have been attracting very high valuations, prompting anything that was able to market itself as software (WeWork being a prime example).

A downward repricing swept across the markets in late summer and early fall.

More structurally, there has been a flip in valuation expectations between private capital investors, who tend to be a small band of ‘true believers’, and broader public markets, who sometimes do not see the same potential: Uber being a case in point. 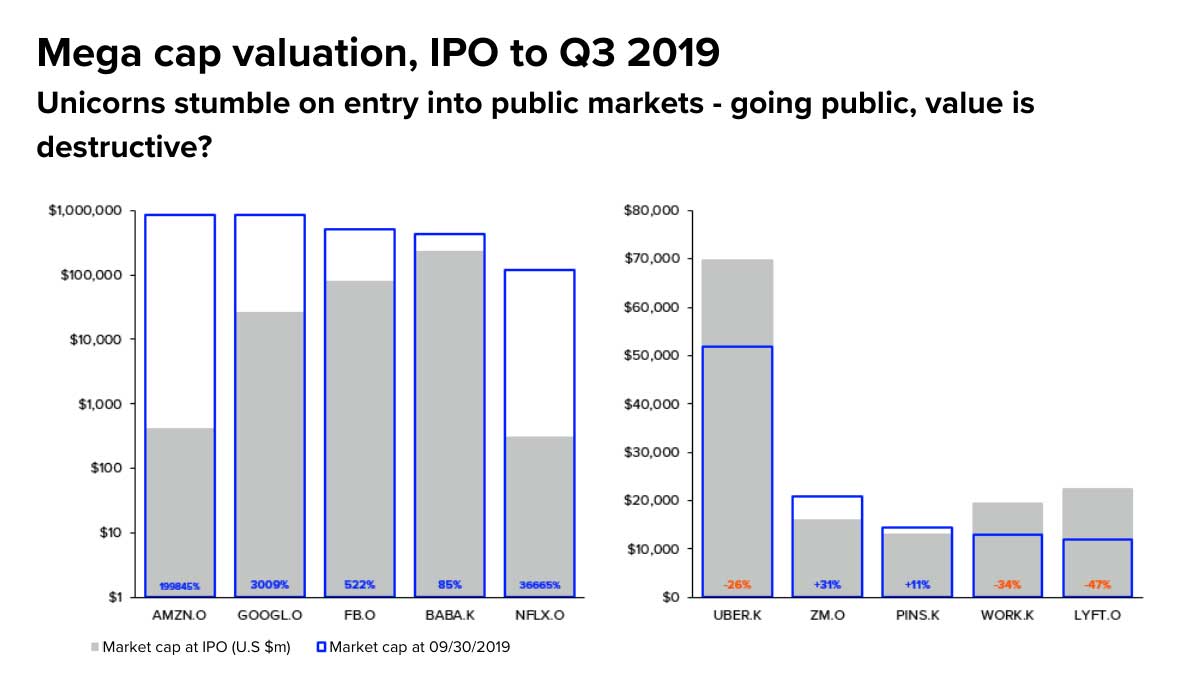 Private capital investors are also affecting the market structurally. While still a rarity, direct IPOs are being hotly debated, and banks are devoting resources to direct listing teams in expectation of more to come.

The trend is being driven by Silicon Valley venture firms who claim to see the IPO process as inefficient. Others take a more cynical view that direct listings do not involve a lock-up, allowing the venture capitalists and other private investors an instant out.

Slack, one of the few direct listings to date, has fallen substantially.

Biopharma remains a staple of the market by volume of deals. Together with tech, they represent more than half of all IPO activity in 2019.

In biotech in particular, there is a trend for a crossover investment round about a year before flotation, bringing in traditional mutual funds who will also participate fully in the IPO.

This tactic has implications for after-market liquidity. As a result, there is a discernible private-public hybrid model emerging in the sector.

There may be a rush of biopharma IPOs in the new year to get ahead of the U.S. presidential elections and any debate about the healthcare system, which could move the market for these stocks.

With Wall Street increasingly skeptical of much-hyped unicorns, maybe there is appetite for a more traditional new listing. It turns out, not so much.

In November, private equity-backed GFL Environmental, a consolidator of the waste management industry, was marketed as a defensive play but was pulled at the last moment due to lack of demand.

The market has form in rejecting or forcing lower valuations on highly leveraged buyout targets, preferring a growth story over levered stability.

In terms of inbound China, there were just nine companies priced on U.S. exchanges during the first three quarters of 2019.

While the trade dispute will have deterred many Chinese companies, U.S. investors are not exactly queuing up for new Chinese names either. 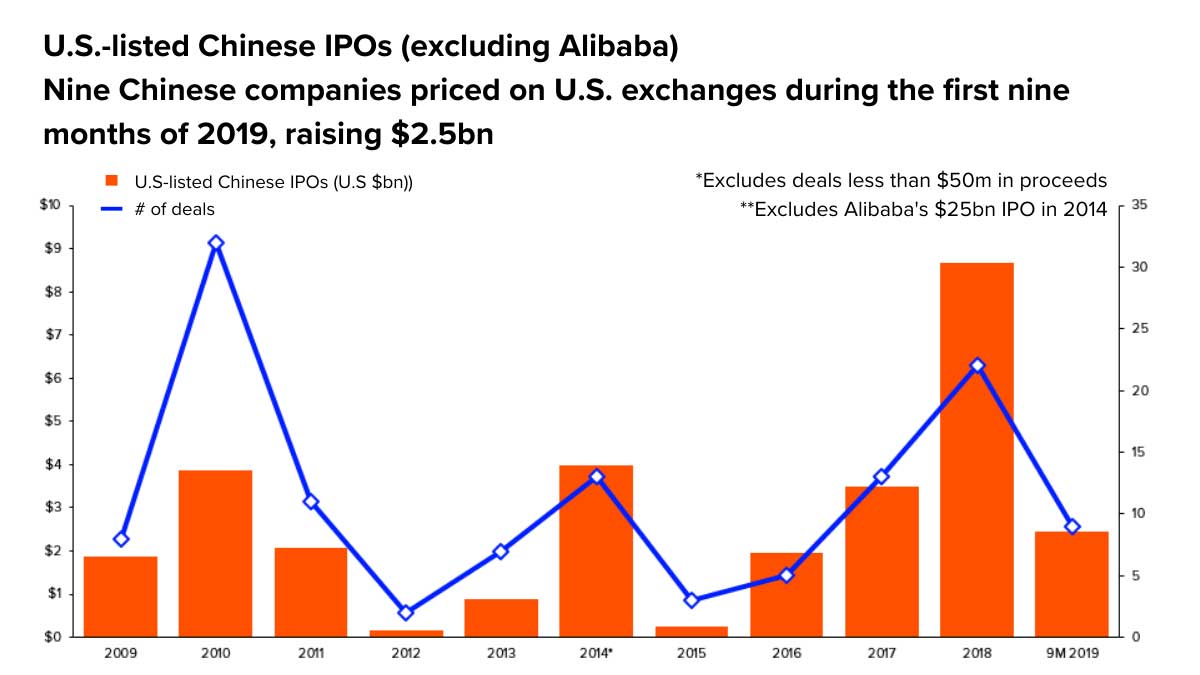 Elsewhere, the Latin America story has become very dynamic in terms of inbound issuance, with fintech companies leading the way. These financial services disruptors see the benefit of accessing a deep pool of tech-hungry investors in the U.S.

The rise of passives and ESG

Special acquisition vehicles also continue their march upward, highly correlated as they are with the private equity fundraising boom.

It’s a fairly safe bet for investors, who earn interest on uninvested capital and can always vote down an acquisition to take their money back.

But Virgin Galactic has shown that it can also be a strategic way of getting unusual businesses to market that might otherwise struggle. 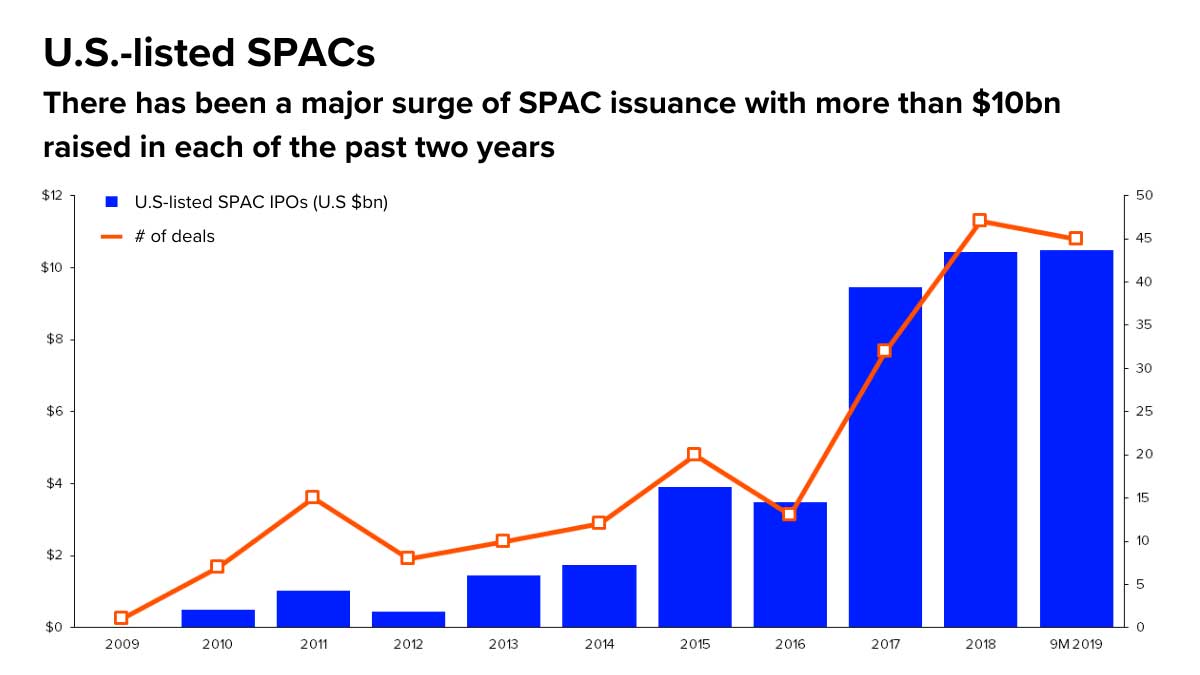 The slow-motion takeover of passive funds has also hit a milestone this quarter, now accounting for more than half the market.

Perhaps a more actionable development is the almost overnight adoption of environmental, social and governance criteria by the world’s asset managers, making them tangible issues — not just talking points — that have begun to move the needle in terms of investor interest.

In the near term, potentially the biggest listing in history involving Saudi state oil giant Aramco will provide a telling bellwether.

Into 2020, we could see an IPO of Freddie Mac and Fannie Mae on the cards. If it happens, it will probably be before the presidential election, given their politicized nature.

Finally, outside the U.S., we may see a speeding up of a rotation out of fixed income and into equities, as interest rates continue to fall in places like Brazil, which also benefits from an economic restructuring and privatization programme.