The M&A boom is continuing thanks to a big surge in the number of mega deals. Matthew Toole, Director, Deals Intelligence, and Breakingviews’ Deputy Editor, Richard Beales, discuss the trends so far this year.

The M&A boom has turned five.

This unprecedented deal-making cycle began in 2014 with a pharma-driven market, before pausing for breath in 2016 and then marching upwards again.

If you look at the stats, a fifth year of buoyant M&A doesn’t happen.

Mega deals drove the most recent gain, with their share of the market jumping from 20 percent to 30 percent.

Eighty one deals greater than US$5 billion accounted for 50 percent of announced M&A activity during the first half of 2018, marking an all-time high for the number, value and overall percentage of mega deals in any first half on record.

Is the M&A boom near its peak?

The market certainly hasn’t been harmed by U.S. tax reform, which reduced tax rates and liberated overseas cash, but the continued easy access to cheap money from well-capitalized banks is the greater driver.

Just look at the $117bn debt package put together by Broadcom for its (blocked) hostile bid against Qualcomm.

Meanwhile, the Trump administration’s inconsistency in its application of blocking measures has led to unpredictability, which may be fueling a ‘give it a go’ mentality.

Whatever the ambient drivers and temptations, the Breakingviews opinion is that much of the M&A boom looks ‘late cycle’ and very expensive.

A cocktail of easy money, momentum and egos seems to be driving the market, rather than common sense.

Behind the headlines, some interesting M&A trends are emerging.

The biggest story of recent years, that of Chinese acquirers, is much quieter now, possibly due to a pull back from the Chinese government who sensed a lot of the transactions were not made at competitive prices.

China inbound activity reached $33.9 billion from 334 deals during the first six months of 2018, the strongest first half on record. 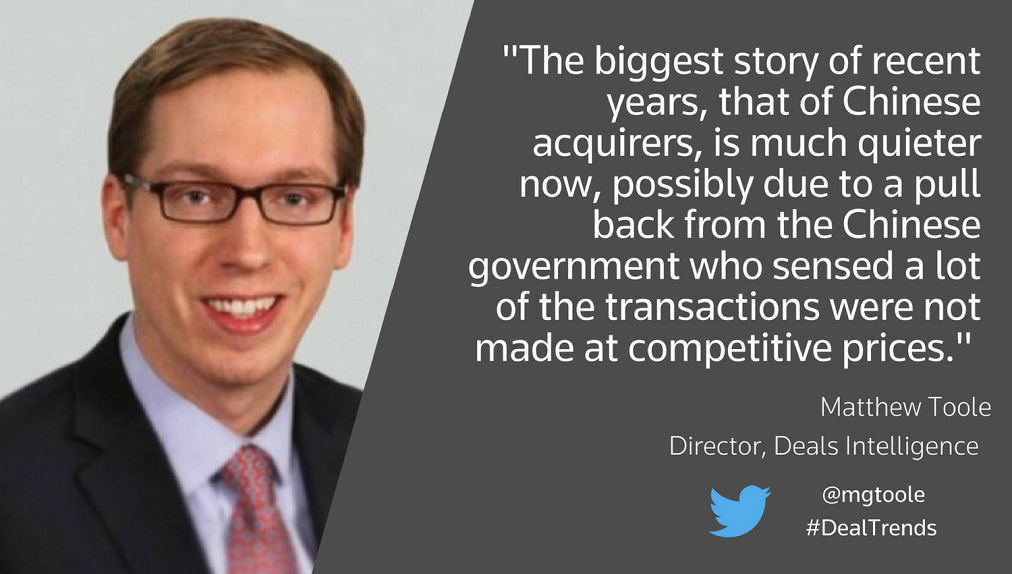 Recent deal activity has been driven more by principals.

There may be a size issue here as the tech giants grow and it becomes harder to buy meaningful sized stakes.

But there is also a buoyancy in markets and a relative buoyancy of economies that is making CEOs more adventurous than they may otherwise be.

As a result, despite overseas and activist pull back, the number of transactions is booming.

Some of this is a desperate scramble to build scale amid external, fundamental pressures.

Almost everyone is scared of Amazon. The media sector has additional night terrors about Netflix, hence tie ups such as Disney/Fox and AT&T Time Warner. It’s possible the fear is over-done, but there is no question it is driving deal activity for now.

It is not just tech and media driving M&A, in fact there is a balanced group across energy, media, healthcare, industrials, consumer, tech, and financials.

For instance, in U.S. healthcare, companies are preparing for political attitudes to harden regarding the nation’s anomalous medicinal pricing. The only way to maintain profit levels is therefore to get bigger.

We have been holding out for a European M&A revival that brings levels at least back to those of 2007.

After a prolonged period of Eurozone uncertainty weighing on sentiment, this year we did see the European break-out, with cross border and domestic activity gaining ground.

If the second half of the year keeps to trend, then Europe will be firmly back in the game.

Given the continent’s better macro performance, there is reason for optimism.

Brexit remains an obvious area of uncertainty, but it could also be loading up deals for when some greater certainty on the nature of any Britain-EU deal is achieved.

So, the picture is positive, but for how much longer can the M&A boom and the good times roll?

During the U.S. Presidential election, Breakingviews wrote that whoever won would face a recession, regardless of what they did, because the bull run was already at the long end of what we’ve seen before. And yet on it goes.

Perhaps the weakness of the recovery has given it greater longevity, and the old phrase that bull runs don’t die of old age may apply too.

But nobody is complacent, given that prices are objectively stretched. Meanwhile, interest rates are slowly rising.

The number of independent advisory firms has doubled since financial crisis levels, with around 1,000 boutiques collecting some manner of advisory fee, and representing around one-third of the total share of wallet.

An interesting observation is that some of the bigger boutiques are getting more established, and maybe losing nimbleness along the way.

These so-called bulgetiques may be better positioned to weather any downturn than the one-sector, one-deal-maker firms.

Their swift actions to repair balance sheets are now giving the Americans a fundamental advantage in that they can arrange finance and provide more certainty than their European counterparts.

IPOs on the up

IPOs too, are part of the trend towards the mega.

Global IPOs were up 22 percent to a three-year high, but the number of IPOs is way down. And the road to an IPO is becoming much more winding.

Other well-capitalized ‘unicorns’ are viewing a listing as a liquidity rather than capital raising event.

The argument seems to be that it is easier to secure a few billion from a sovereign sponsor, and spend these extra few years as a private company investing heavily and expanding fast, before floating at a massively higher valuation.

We’ll see if that starts happening with the Softbank Vision investments.

Leveraged finance has its day

Compared with all the equity action, debt capital markets are relatively subdued.

It is mainly a corporate story, and mainly an investment grade story too, and yes again, we are seeing a dominance of larger deals. 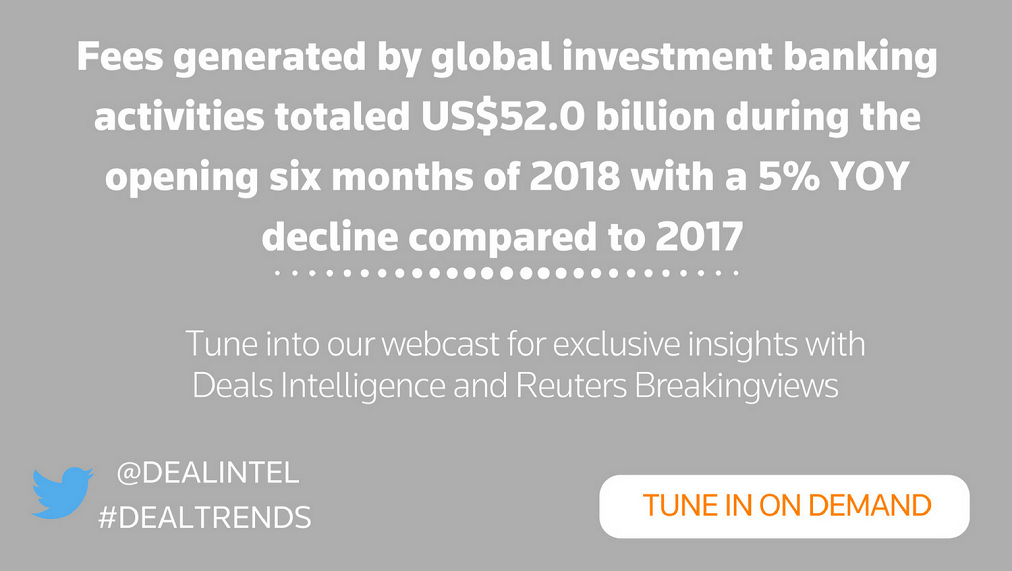 But overall U.S. offerings are down 9 percent as most of the crisis-related refinancing has been worked through and interest rates start to slowly climb.

By contrast a leveraged finance boom in the first half of the year bears testament to the fact that big U.S. lenders have truly opened up their balance sheets and are offering huge commitments to underwrite deals.

As a consequence, high yield bonds represent just 11 percent of the overall market.

Monitor deal flow, identify market trends and gain insight into your competitive positioning within any region, asset class or industry vertical with flexible levels of granularity.

Our industry leading League Table rankings of investment banks and law firms published by dozens of leading media outlets worldwide leverage our global news and sourcing capabilities along with our strong relationships with the deal making community to ensure data accuracy and completeness.