It’s not what anyone was expecting for 2020. No, not COVID-19, but the fact that as the world economy largely shut up shop, capital markets did a roaring trade. And not just in debt issuance, but equity, too. Matthew Toole, Director of Deals Intelligence, explains.

While M&A markets became understandably jittery in Q2, a surge in activity across capital markets from spring onwards has seen investment banking fees in the first nine months of this year hit all-time record highs.

So many records have been broken so far this year that we are still tabulating them.

Trends in capital markets during Q3

Every month of 2020, except for March, saw an increase on the corresponding month in 2019. In addition, January, February, April, June, August and September all saw the highest fee take for their month of all time.

Explore what you get with Refinitiv Workspace for Investment Bankers

The U.S. remains dominant in bonds, in M&A as both acquirers and targets, and also a tremendous level of IPO and common stock issuance on America’s stock exchanges. For the first time ever, Asia has surpassed Europe as a generator of fees across all investment banking products, so far this year.

Even M&A is firing up

However, while a summer resurgence wasn’t enough to fully make up the decline, there are some big deals in pipeline, with record levels of mega deals announced over the summer. Q3 almost doubled Q2’s value, and tripled in the U.S.

In the context of unprecedented uncertainty around valuations and outlook, it is a performance that took many by surprise.

While the total fee pool is down, boutiques have taken a larger slice than ever, winning 39 percent by value, compared with the 31 percent captured by the five largest banks. Seven of the 10 largest transactions in Q3 involved at least one boutique adviser.

Q3 was also record-breaking for mega deals, with an eye-watering $496bn from 37 transactions. This was more than double the value during the same period last year, as well as being the highest Q3 mega-deal tally ever.

One area not breaking records was cross-border M&A, with a total value of $803bn. This was about level with 2019, but with fewer mid-market deals, as corporate deal-makers retrench and consider the ramifications of the introduction of hard borders on people and goods in the wake of COVID-19, and amid a wider climate of growing protectionism that we have seen in recent years. Cross-border deals in spring had a run-rate well below $50bn, levels not seen this decade.

A few very big deals in late summer, such as 7-Eleven’s acquisition of Speedway gas stations for $21bn, helped to push Q3’s tally to $360bn.

In terms of future deal drivers, an online poll of attendees at our recent Q3 Deep Dive webinar found that 39 percent expect ‘Restructuring and retrenching’ to dominate M&A over the coming period, followed by consolidation. Nobody expects a return to geographic expansionism any time soon.

As anticipated by the Refinitiv DealMakers Sentiment Survey at the start of the year, the technology sector leads the M&A markets, accounting for 17 percent of all transactions, a dominance it last saw when people were worried about the Millennium Bug.

It’s notable that mid-market tech has suffered a much smaller decline than other sectors, driven by growth and private equity investments, and speaking to the essential health of the sector.

Further down the league table comes the topical sector of healthcare. From a value perspective, it underperformed, with big yearly declines. But look at that enormous mid-market of sub-$10bn and sub-$5bn deals. One to watch.

Meanwhile, those hit hardest by the pandemic — retail and consumer — will need some time to figure out what operating models, risks and valuations look like in the medium-term before any return to risk-on activity.

One corner of the market that is fully risk-on is private equity.

After a record fundraising year in 2019, we saw over 5,500 transactions in the first nine months of the year, an all-time record. This pushed sponsor-backed transactions as a proportion of overall activity to 16 percent, its highest level since before the global financial crisis.

In a similar vein, special purpose acquisition vehicles (SPACs) have returned in a big way, with 118 SPAC IPOs raising $41bn in the first nine months of the year.

Once a relative niche area, the quality of SPACs have attracted almost every equity underwriter in. We appear to be in just the early-stages of a significant SPAC story, one that can’t be ignored if just for sheer volume of capital it has attracted.

Meanwhile, strong demand for responsible investment continues to support sustainable finance, with an all-time record for green bonds, sustainability bonds and social bonds. While it is growing from a low-base, banks are organizing themselves around this theme and it is certainly one to watch.

Refinitiv Workspace enables you to find the content you need straight away. 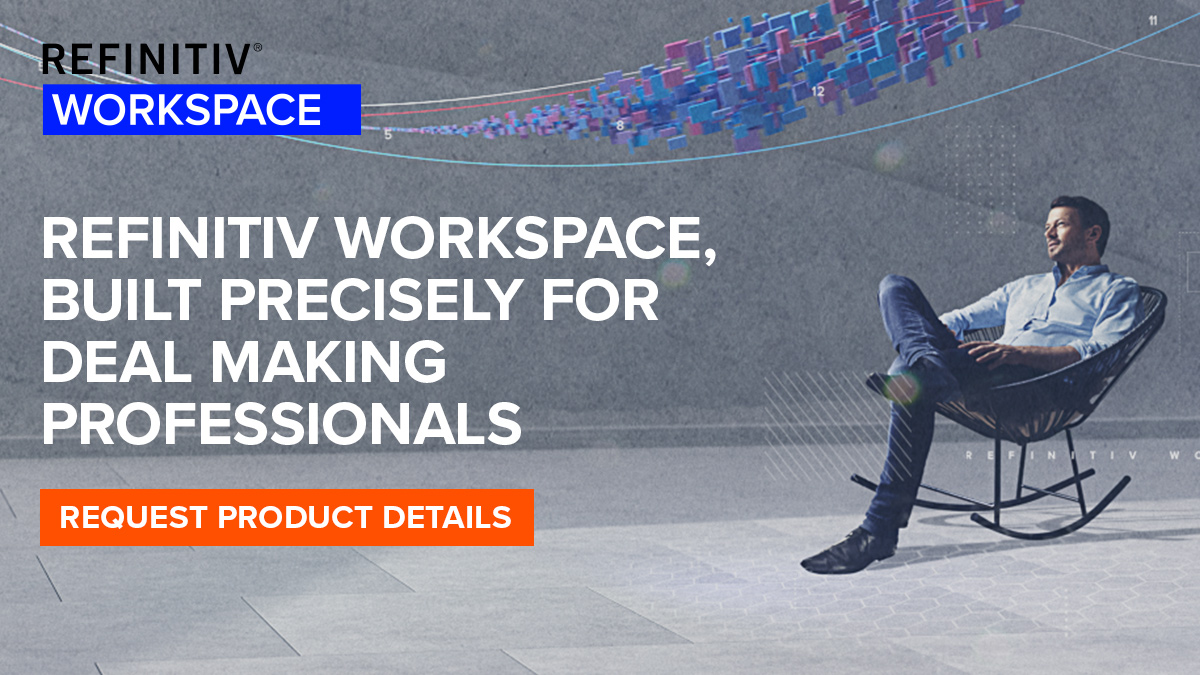