What does the oil price rebound mean for Canadian energy? 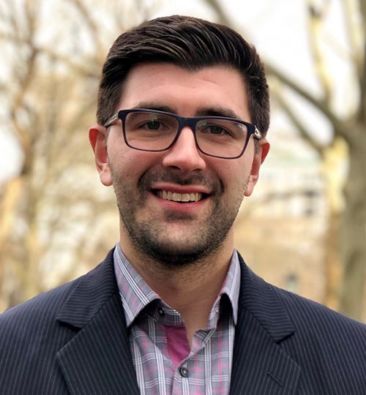 The ramp up in oil production in March from Saudi Arabia and Russia, coupled with the drastic decrease in demand from COVID-19, caused energy prices and related equities to decline significantly. With an oil price rebound from late-April lows, what does the second half of 2020 have in store for the Canadian energy sector?

On 20 April, WTI futures contracts traded in negative territory for the first time in their history, closing at -$37.63 per barrel.

Since bottoming, the WTI oil price has rebounded by nearly $80 per barrel, and has been trading near $40 per barrel since the beginning of June, resulting in some of the shut-in production coming back online.

Western Canadian Select (WCS) oil has seen similar rises to WTI, with the spot price at Hardisty up by nearly 300 per cent since the beginning of April, helping to boost the share price for heavy oil producers such as Canadian Natural (CNQ.TO).

Saudi Aramco also raised its official selling prices (OSP) for heavy crude grades for two consecutive months, which may act as a catalyst for WCS prices.

Despite the oil price rebound, the energy sector has lagged the broader market.

The S&P TSX Energy Sector Index (.GTSX10) remains down 31 per cent year-to-date, compared with the TSX Composite Index (.GSPTSE), which is only down 5 per cent.

This negative sentiment on forecast earnings suggests that analysts are expecting strong headwinds for Canadian energy companies as they adjust to this new environment.

Listen to Stephen Donovan guest on Episode 10 of The Rundown Tank: Americas Oil, your in-depth weekly briefing on the global and regional dynamics of the oil industry

While crude prices have risen in the short-term, drilling rig activity remains at a 20-year low in Canada.

The rig count data reported by Baker Hughes had 13 active rigs in Canada as of June 26, a decrease of more than 100 rigs from the same period in 2019.

The rig count numbers increased to 32 as of July 17, but this slow rise in drilling activity is in line with the CAPEX reductions announced by energy companies, and suggests that drilling activity could be depressed for at least the next 12 months.

With crude demand expected to increase in the second half of 2020, crude prices may see a boost if demand starts to outpace supply. 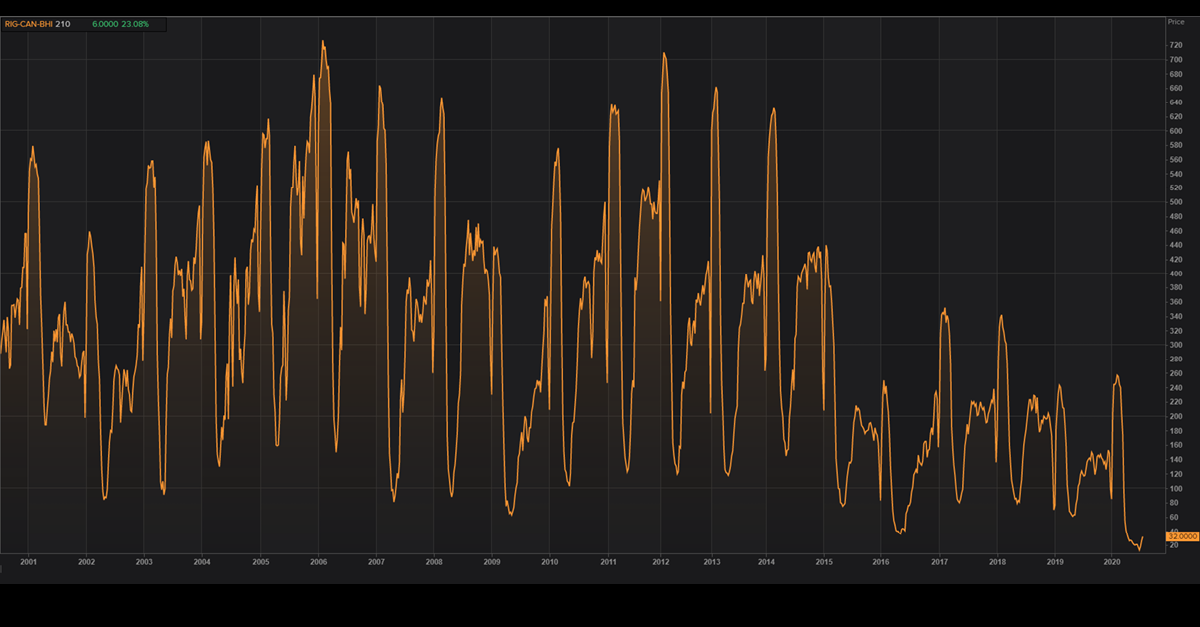 Are you prepared for potential risks in your oil and gas sector supply chain? Read the Refinitiv Expert Talk — Drilling Down: Oil And Gas Supply Chain Risks Revealed

The impact on crude-by-rail shipments

Figures for May are expected to drop even lower. However, we could see a reversal in this trend in the second half of 2020 due to the challenges facing pipelines. Over the past month alone, there have been three blows dealt to pipeline sector.

The U.S. District Court for the District of Columbia ordered that Energy Transfer LP shut down the Dakota Access Pipeline (DAP) by 5 August.

The DAP is a 570K barrel per day crude pipeline that transports crude from the Bakken in North Dakota to Patoka, Illinois. This pipeline has been in operation since June 2017, and the potential closure of a previously approved, operating pipeline could cause investors to re-think investing in North American infrastructure.

Meanwhile, the U.S. Supreme Court blocked a key environmental permit for the Keystone XL pipeline. This dealt another blow to the 1,900km pipeline that would ship 830K barrels per day of Canadian crude from Alberta to the Gulf Coast.

Keystone XL has faced several setbacks since being announced, and Democratic nominee Joe Biden has declared he would halt the project if elected.

And the Atlantic Coast Pipeline, which was set to transport natural gas through North Carolina and Virginia, was cancelled due to projected cost overruns, project execution risk, and legal risk.

With these setbacks, crude-by-rail shipments should rise, and we may see an increase in waterborne transportation as companies look to get their product to market.

Cenovus Energy (CVE.TO) announced earlier this month that it would ship crude from Burnaby, BC to Saint John, NB via the Panama Canal. The nearly 12,000km journey is significantly longer than using a pipeline or railcar, and shows the innovative approach companies will take to get their product to market.

Refinitiv is now tracking the estimated cost for this journey for both Panamax (TD-VAN1-SJB) and Suexmax (TD-VAN2-SJB) vessels, seen in Figure 4. 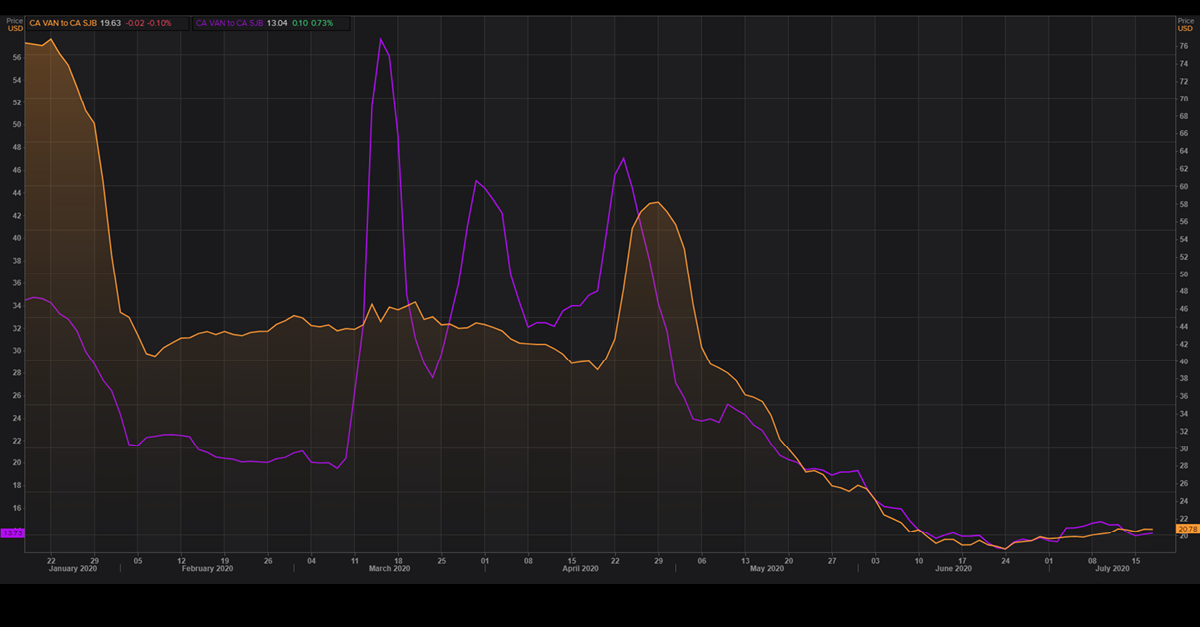 The dynamics of the energy industry change at a rapid pace, and despite having an extremely volatile start to the year, fundamentals have shown signs of recovering, and we can start to see some light at the end of the tunnel for the Canadian energy sector.

Optimize your deep analysis and spot growth opportunities in the power, gas, coal, carbon, and oil markets with Eikon