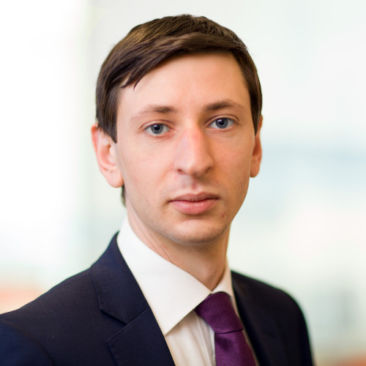 We’ve put U.S. corporate bonds through the FRTB’s Risk Factor Eligibility Test with some surprising results. Read more to find out the lessons for regulators and banks.

Last month, we launched a series of articles looking at the Risk Factor Eligibility Test (RFET) requirements under the Fundamental Review of the Trading Book (FRTB).

Previously, we noted that the post-trade transparency mandated under MiFID II could act as an important source of “real” observation data for equity, bond and derivative instruments traded in Europe.

However, we also highlighted that the data was subject to widespread adoption of extensive deferrals, which means it’s critical that regulators provide banks with sufficient time to collect deferred data prior to conducting their RFET assessment. 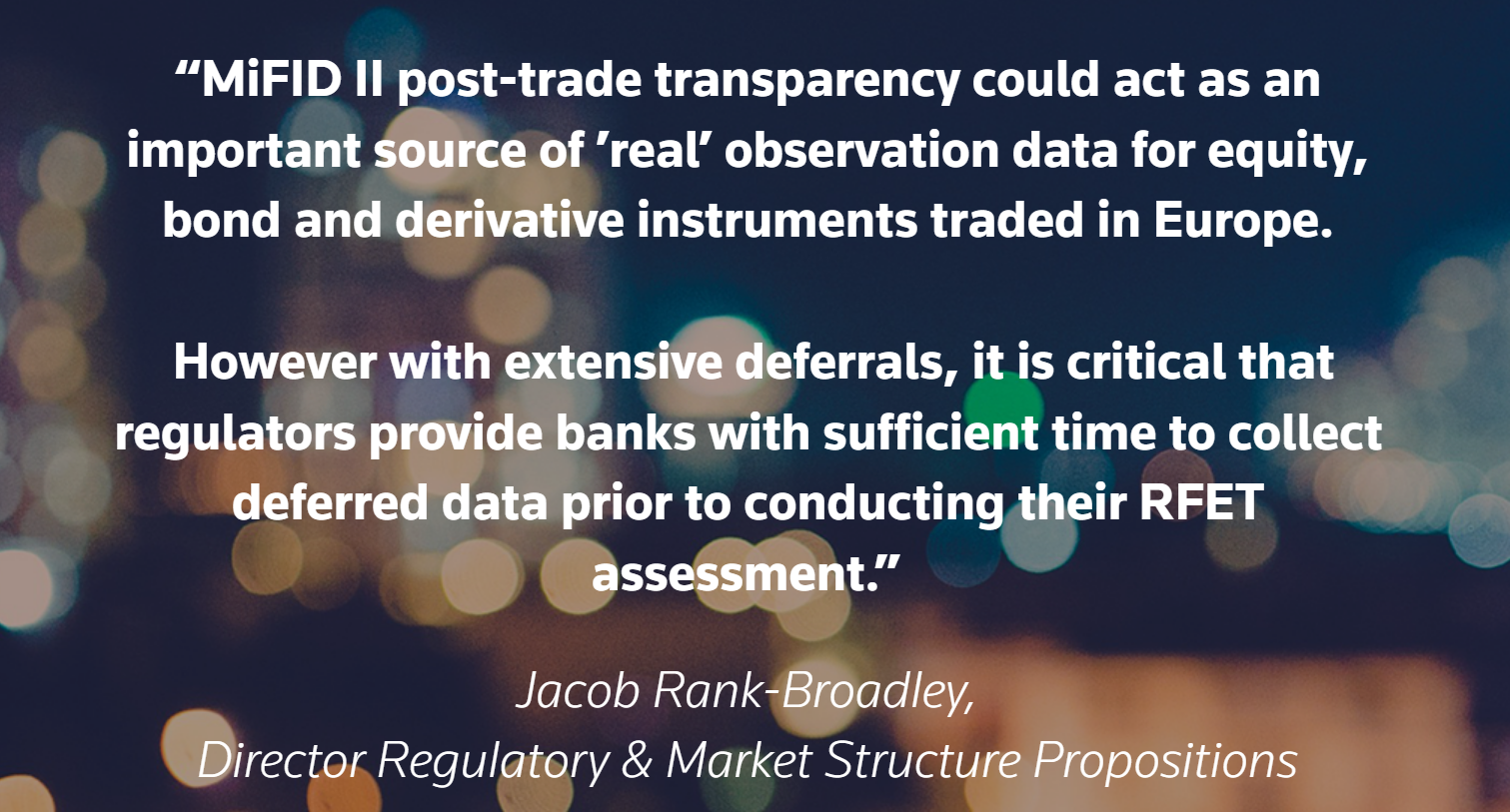 In this second part of the series, we replicate the RFET and consider: “How will the U.S. corporate bond market perform in the Risk Factor Eligibility Test?”

Although corporate bond markets tend to be large in terms of notional outstanding, they are often characterized by liquidity concentrated in some of the largest names and relative recent issuance.

The U.S. corporate bond market is one of the most liquid in the world so ideally it shouldn’t be particularly challenging to pass the test.

We start the process by mapping our 2017 full year’s worth of FINRA TRACE data into buckets based on issuer, currency and remaining maturity (using the BCBS Annex B ‘Alternative 2’ framework).

This gives us 11,000 buckets with at least one observation in each. We then test each bucket to see whether it’s traded actively (i.e. at least 24 observations) and frequently (i.e. no more than one month between any two consecutive observations).

As the image below demonstrates, only 36 percent of the buckets (or risk factors) pass the RFET criteria. For one of the more liquid OTC market’s this feels like a rather disappointing outcome.

Surprised by our low RFET pass rate, we dug a little deeper in an attempt to understand what’s driving this outcome.

Looking at the presence of Non-Modellable Risk Factors by remaining maturity gave us clues to suggest the disappointing result might not just be a feature of the market structure but also of the test itself.

Our next image shows that for the first three maturity buckets (i.e. up to one year) the RFET pass rate was almost zero.

Whilst we weren’t surprised to find significant differences in the RFET pass rate at different maturity bands, we were shocked that it’s almost impossible for U.S. corporate bonds with remaining maturity less than one year to pass RFET. 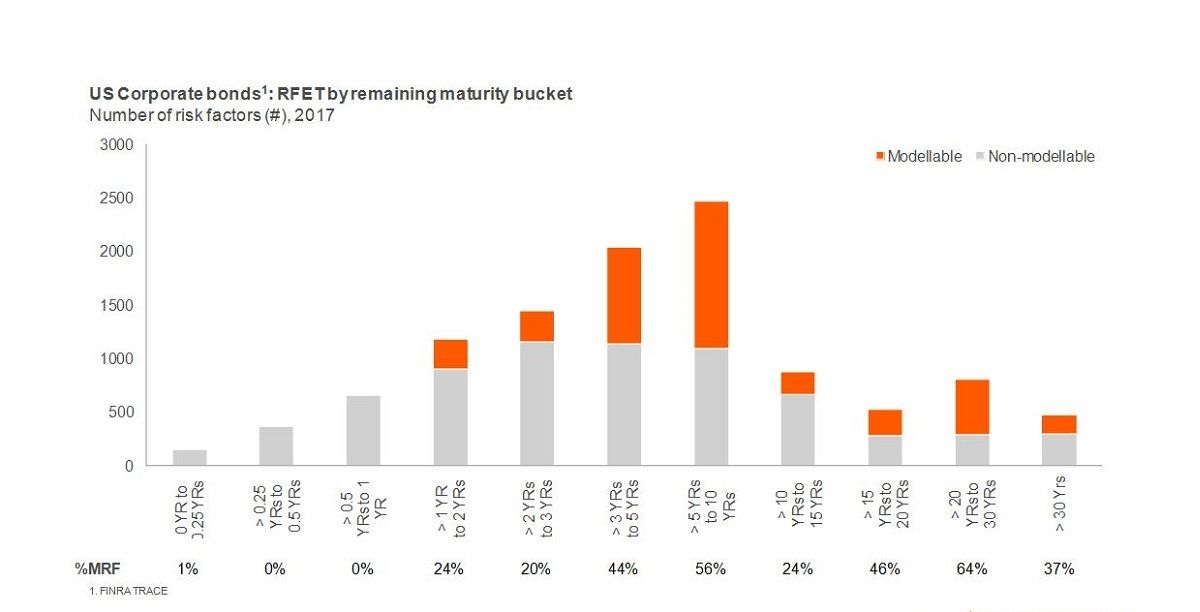 So what’s going on? The easiest way to understand what’s driving this phenomenon is to look at an example. Let’s take an American Express Co bond that matured in March 2018. (See our final image, below).

For the next couple of months the bond’s trades get allocated to this bucket, but once we reach mid-March the bond no longer belongs to the greater than one to two years’ bucket.

Again, after six months the bond then rolls into a third bucket given its remaining maturity continues to decrease.

The impact of the bond migrating between buckets is that although it continues to trade frequently (basically every day) each bucket is unable to meet the criteria of monthly observations since the buckets are less than one year in length.

And the frequency with which American Express (and all other issuers) issue bonds isn’t sufficient to offset the impact of bonds rolling between remaining maturity buckets.

Clearly, the key takeaway here is that it is near impossible for corporate bonds to pass RFET in any framework with maturity buckets shorter than one year as individual issuers don’t consistently issue new bonds every few months.

As a minimum we would encourage regulators and banks to leverage a framework where maturity buckets are at a minimum one year long if they have any desire to pass RFET.

In our next blog, we examine how the FX options market performs in the RFET assessment and look at what’s more important — the obligation for 24 observations per year or for there to be no more than one month between each observation.

Read our full response to the consultative document on the BCBS website to learn more.

The expertise to help you thrive in a MiFID II world

Understand your basic obligations and requirements from the MiFID II regime