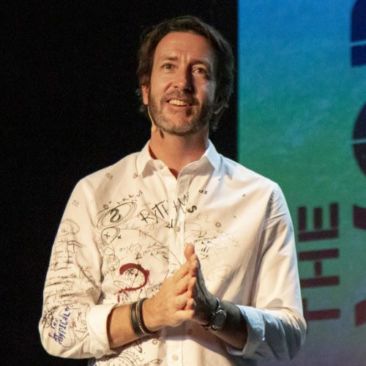 Damian is the Co-Founder and Chief Creative Officer of Real Vision.

Real Vision is a multi-media brand, created to help investors understand the complex world of finance, business and the global economy with in-depth analysis from real experts.

It has subscribers in over 100 countries.

Damian began his career in advertising and design. He worked at some of the biggest agencies in Europe before co-founding a creative hotshop where he won multiple awards, was listed as one of ‘The 100 Most Influential People in Media’ and worked with Damien Hirst on a campaign that was later exhibited at the Tate Modern Gallery.

Following the sale of his agency to a major global network, Damian spent a year travelling through the French Canals to Spain with his young family in a wooden boat.
He co-wrote the story of their adventure with his wife — and their book was published internationally (hardback and paperback) by Orion.

Damian lived in Spain for 10 years and from that base he worked globally as a marketing strategist with clients such as Microsoft and Universal Records. He is particularly well-known in the book industry, where he has worked on strategy for many famous authors including JK Rowling, Lee Child, Jodi Picoult and Stephen King.

During that time, he was also part of the core team that conceived and developed the multi-media story of ‘Belgravia’, working with Julian Fellowes of Downton Abbey fame to turn this into a successful novel and television series.

Before co-founding Real Vision, Damian conceived and developed an award-winning, number one gaming app that was highlighted by Apple for its revolutionary and genre-bending approach.

How is financial video influencing behavior?