Saudi Arabia anti-corruption and your compliance

The Saudi Arabia anti-corruption and AML drive highlights why financial institutions must always know who they are doing business with, including third parties. How can they ensure compliance and fight financial crime?

Many financial institutions and organizations operating in the Kingdom of Saudi Arabia are evaluating the competencies and skills of their compliance functions.

They’re asking whether their compliance teams have the ability — and necessary resources — to effectively manage anti-money laundering (AML) and anti-bribery and corruption (ABC) compliance in an environment that is now heavily focused on fighting these and other financial crimes.

Cracking down on corruption is a key aspect of the Saudi Arabia Vision 2030; a series of reforms unveiled by Crown Prince Mohammed bin Salman to transform the Kingdom and diversify its economy.

The program includes a “zero tolerance” policy for all levels of corruption.

And to this end, the Kingdom’s government launched a sweeping anti-corruption investigation in November 2017, involving the detainment of many government ministers, members of the royal family and prominent business people.

While details surrounding the allegations and financial settlements that were reached during this initiative remain vague, it’s clear that this is only the beginning of the Kingdom’s fight against corruption.

King Salman has called for whistleblowers in both the private and public sectors to be protected, creating opportunities for employees to report incidents of corruption within their organizations or networks.

Additionally, new structures have been set up within the public prosecutor’s office to speed up the investigation and prosecution of such cases.

Simultaneously, compliance and risk management professionals need to stay up to date on all the developments in the Saudi Arabia anti-corruption campaign in order to manage any associations that their firms may have — even unwittingly — with any individuals or entities implicated in the corruption sweep.

Firms need to know who they’re doing business with, both directly and via their third-party networks; and where payments and investments are coming from. 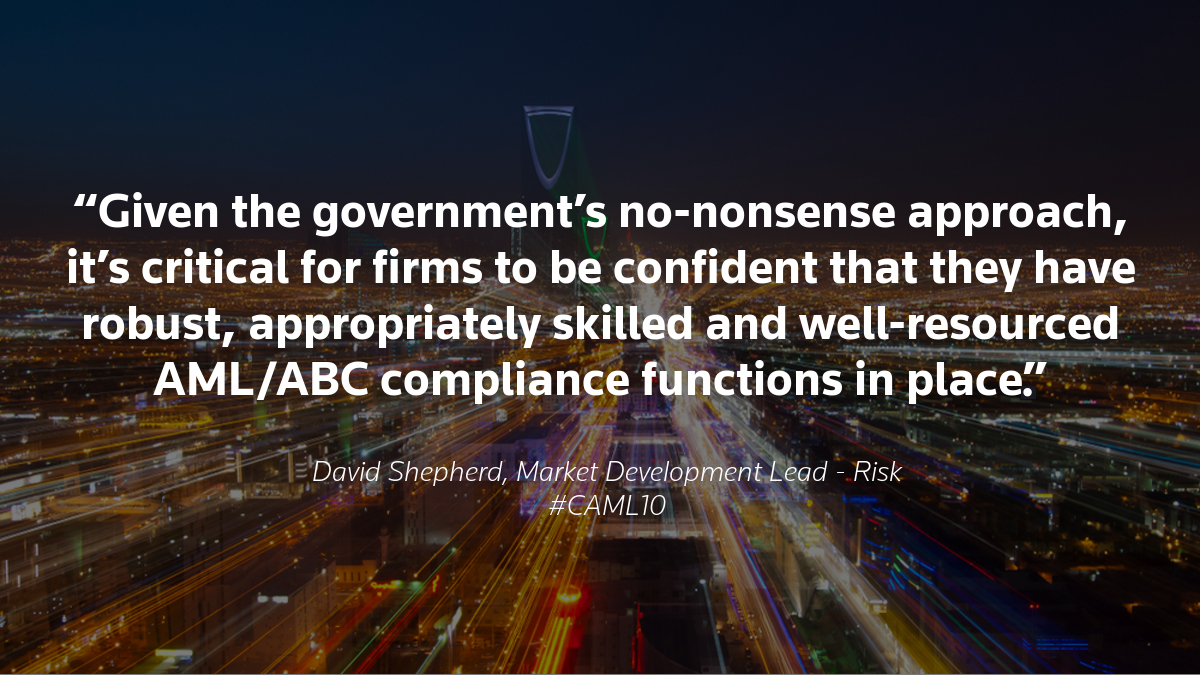 It’s also critical to have clear documentation in place to prove that the necessary AML/ABC compliance processes and due diligence procedures have been carried out — both at the on-boarding stage and on an ongoing basis.

In this context, having access to accurate information on customers, third-party vendors, suppliers and partners, as well as transactions, is paramount.

Non-compliance could bring about serious risks, including financial penalties and reputational damage.

Yet the motivation for putting robust compliance procedures in place goes beyond obeying rules and managing risk to playing a vital role in the fight against these and other financial crimes, which erode economic growth and opportunity in the Kingdom and region. 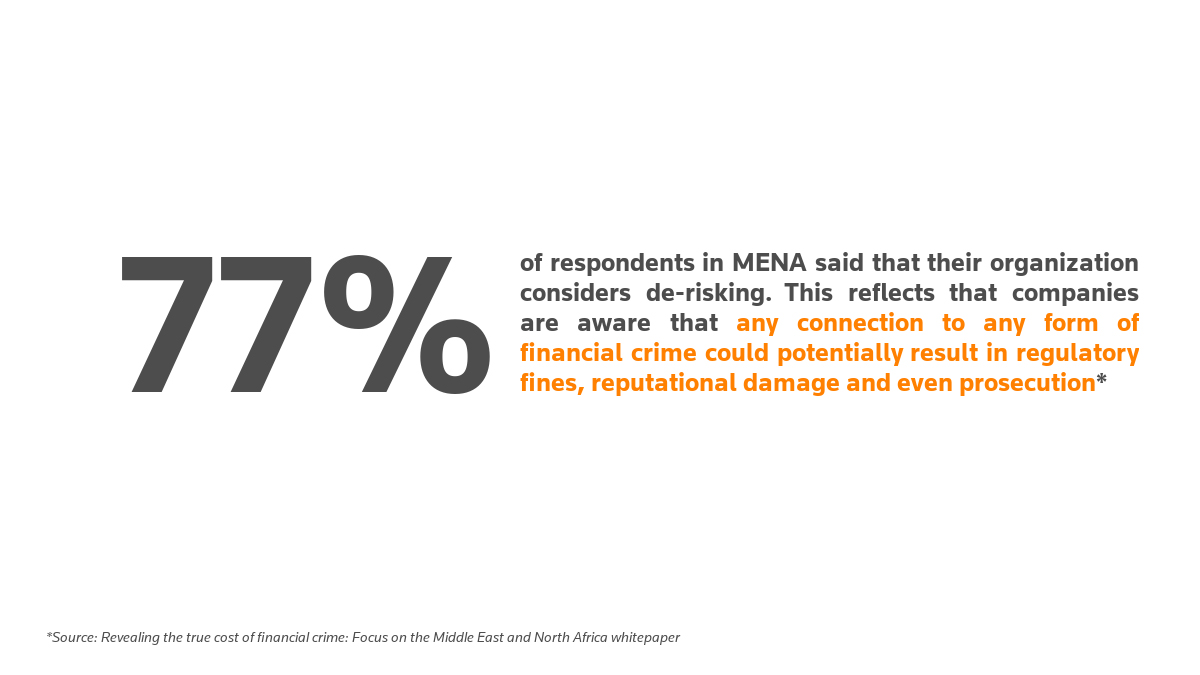 The impact of financial crime

Our independent survey by in 2018 focused on the impact of financial crime on business and society in the MENA region.

One key risk factor that came to light was the extensive and complex third-party networks that many organizations in the region have, sometimes spanning the globe.

When asked to estimate how many third-party vendor, supplier or partner relationships their companies had over the previous 12 months, the average number of such relationships in the MENA region stood at 9,007. This figure is substantially higher than the global average of 7,693.

The issue is that these networks can provide opportunities for financial criminals to obscure their malicious activities.

When evaluating whether respondents had appropriate AML/ABC compliance programs in place in relation to the entities in these networks, the study found that fewer than half (42 percent) of these relationships were fully screened at both the onboarding stage and on an ongoing basis.

More work clearly needs to be done in this critical area — especially considering that 45 percent of respondents reported falling victim to at least one form of financial crime within their global operations during the 12 months preceding the survey.

When it comes to the cost of compliance, those surveyed spent 3.8 percent of turnover to prevent financial crime around their global operations during the same period.

While this was the highest reported spend across all regions surveyed — is it enough? 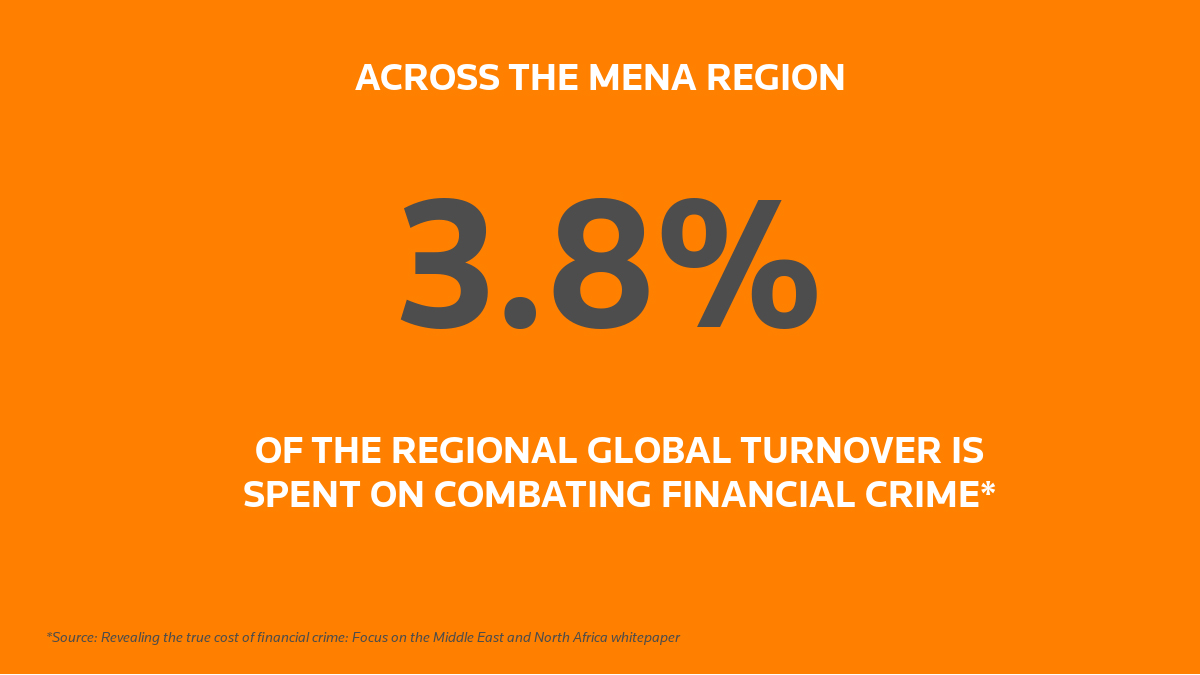 A further survey by us, focusing on the cost of compliance, revealed that 61 percent of firms worldwide planned to increase their total compliance team budget in 2018.

One development influencing this trend is the continued implementation of new, far-reaching regulatory regimes, which are increasing the risk and compliance management workload.

As a result, many firms said they plan to hire additional skilled and senior personnel, step up training and invest in compliance monitoring tools.

In the Middle East specifically, the need for increased regulatory liaison is putting further pressure on firms’ compliance resources.

Here, 66 percent of firms (as opposed to an average of 58 percent globally) said they expected to spend more time liaising and communicating with regulators and exchanges.

This could reflect their need to gain a better understanding of authorities’ expectations in the region’s dynamic regulatory environment.

One important source of information for the region’s financial industry in the coming months will be the FATF-MENAFATF Mutual Evaluation Report on Saudi Arabia.

This will provide an update on the Kingdom’s progress in complying with the recommendations of the Financial Action Task Force (FATF) — the inter-governmental body that sets globally accepted standards for combating money laundering, terrorist financing and other financial crimes.

While the Gulf Cooperation Council (GCC) itself is a full member of the FATF, Saudi Arabia — as a GCC member country — currently has FATF ‘Observer’ status as it works towards becoming a full FATF member.

Mutual Evaluation Reports on Saudi Arabia are therefore conducted jointly between FATF and MENAFATF (the regional AML/CFT body for the Middle East and North Africa).

The most recent report was discussed at the FATF-MENAFATF June 2018 Joint Plenary in Paris; and the approved version is due to be published by September 2018.

This report should provide guidance for compliance and risk management teams in addressing the Saudi Arabia anti-corruption drive.

All these factors considered, Saudi Arabia’s financial and business community needs to be aware that compliance risks are evolving at a rapid pace; and the compliance function needs to be agile and competent to keep up.

Technology can help businesses identify, mitigate and act upon the risk associated with financial crime through services such as risk intelligence screening, enhanced due diligence and transaction monitoring.

It can also automate certain aspects of AML/ABC compliance activities, allowing compliance teams to shift their focus toward more strategic aspects of their roles.

This not only helps to control overall compliance costs, but also enables the compliance and risk management function to stay a step ahead of the risks associated with financial crime.

In a complex landscape, where the regulatory environment is in constant flux and economic reforms are shifting the way that Saudi Arabia does business, AML/ABC compliance goes beyond ensuring the strength of firms’ risk and financial crime controls, to challenging the organizational compliance culture itself.

The focus is no longer on box-ticking and rule-obeying, but rather on promoting compliance, transparency and ethical behaviour at every level of the enterprise.

It’s also about ensuring that the right compliance resources and skills are in place to provide a strategic advantage in the rapidly evolving economic and regulatory landscape of Saudi Arabia.

Detailed integrity and advanced background checks on any entity or individual