The world has a carbon budget. Deciding how to spend it is complicated, contentious and consequential. Countries and companies are responding to the urgent reality of climate change with various net zero commitments.

Investors might well ask, how will net zero goals be achieved? There are different scenarios for the world’s nations to meet Paris global warming targets.

At the sector level, investors need to identify and quantify the sectors with the ability to move decisively to decarbonise, and those that are looking at a longer time horizon.

The UN’s Intergovernmental Panel on Climate Change recently estimated the world’s remaining carbon budget for different warming scenarios along with scientists’ confidence in these estimates. 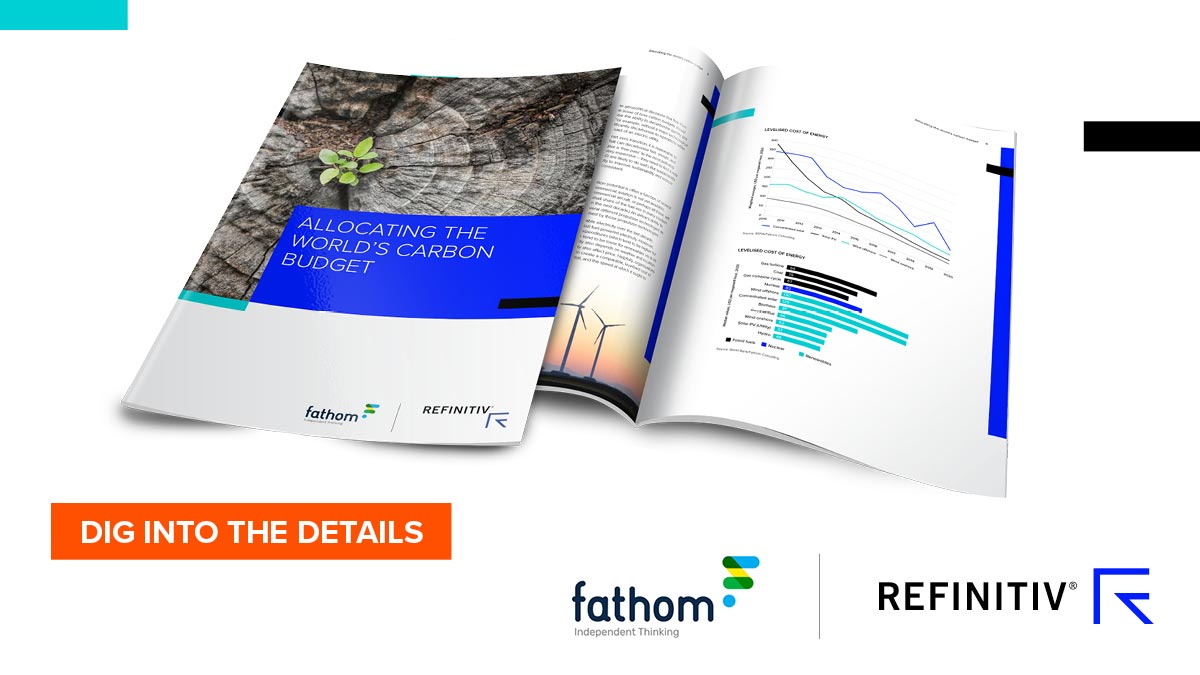 Discover more analysis on how the world should be allocating a carbon budget in our latest report from partners, Fathom Consulting

At the country level, structural issues and availability of resources will make decarbonisation efforts feel different, but to meet Paris goals, all countries ought to decarbonise quickly.

The report sets out various scenarios, for instance, it is estimated that 500 gigatons (Gt) of CO2 emissions emitted after the beginning of 2020 would result in a 50 percent chance of limiting global warming to 1.5°C, an ambitious Paris goal.

On the other hand, 900 Gt of CO2 gives an 83 percent chance of keeping warming below 2.0°C, a more generous Paris goal.

Investors need to analyse the structural differences among nations that will influence ability to reach Paris goals. The paths to net zero will differ.

For instance, 20 percent of India’s annual greenhouse gas emissions come from agriculture, more than double the equivalent share in the EU and about four times as much as in the U.S. or China.

While it is much harder and more expensive to reduce emissions from agriculture than it is for some other activities, a relatively large share of electricity in India comes from coal, which could relatively inexpensively be switched to cleaner forms of energy, making it easier for India relative to others in this respect.

Allocation of the carbon budget across sectors

The issue of how carbon budgets should be allocated across sectors is even more pertinent to investors, not least because the ability to decarbonise quickly and cheaply differs more across sectors than it does across countries.

For example, without a major technological breakthrough, it would be virtually impossible for any airline to significantly decarbonise its operations within the next few years without going bust, but the same could not be said of an electric utility.

There are many reasons that an investor would want to know an industry’s decarbonisation potential: to manage risks; spot opportunities; engage with corporate management; comply with financial reporting rules; set metrics and targets; invest sustainably; and anticipate regulatory changes.

If a flat economy-wide carbon tax were imposed, for example, industries with less ability to decarbonise would suffer greater costs. But regulations (and taxes) are often based on the decarbonisation potential of industries, for example, the UK government’s coming ban on the sale of new petrol and diesel cars is an example.

Moreover, sustainable and Paris-aligned investing strategies are not all about selling carbon-intensive assets and buying renewable energy. Yes, renewable energy is hugely important, but investment also needs to happen in those areas where low-carbon solutions do not yet exist.

Organisations such as the Science Based Targets initiative and Transition Pathway Initiative provide some useful guidance on the decarbonisation potential of different sectors and sector-specific transition pathways considered to be consistent with Paris climate goals.

The UK’s Climate Change Committee – an independent body which advises the UK government on how it should set and manage the country’s carbon budget – is another useful source.

They assume under one scenario that by 2050, weekly meat consumption for the average household declines by 33 percent, all new cars sold are battery powered, electricity is virtually carbon free, wooded areas increase by around 40 percent and restored peatlands are nearly tripled.

Discover more analysis on how the world should be allocating a carbon budget in our latest report from partners, Fathom Consulting