Market Voice: Tariffs Seem to be the Answer to Every Problem

The China-US trade tensions are intensifying with broader and higher tariffs and embargoes being threatened from both sides of the Pacific. The escalation increased the immediate impact on the market and perhaps more ominously has dimmed prospects for a quick resolution. Nevertheless, we continue to believe the market is vastly overacting to the implications of the China trade dispute for the US economy. In contrast, the sudden threat of across-the-board tariffs on imports from Mexico may be tougher for the economy to absorb – but more on that later.

Figure 1: U.S. Exports to and Imports from China

Chinese Tariffs – Much ado about not much

The tariff imposition has been a two-way affair to date with both countries imposing tariffs but the economic exposure to trade disruption is skewed in the US’s favour.  As shown in the chart above, US exports to China are a fraction – currently about one-fifth – of imports from China. The reality is that US exports to China are miniscule at roughly 0.5% of GDP and about 8% of total merchandise exports. While some specific exports have gotten the Administrations attention – notably the Administration’s focus on soybean producers – overall they are too small for disruptions to have a meaningful impact on the overall economy.

US imports from China are much more substantial at $500 billion or about 20% of total imports and 2.5% of GDP. While constraints on US exports to China are unambiguously (marginally) negative for US growth, the impact of restrictions on imports is less clear-cut. US tariffs on Chinese goods have a multi-directional impact on domestic economic activity. To the degree that the tariffs feed through to higher prices, it will negatively impact demand but to some degree this will be offset by the degree that demand shifts from Chinese to US-based producers. The negative impact is largely driven by the ultimate feed-through of tariffs to final goods prices or compression on earnings as producers – in some cases Chinese producers – absorb the costs of the tariffs.

The chart below show there is a positive correlation (around 25%) between import price and inflation but CPI is much more stable than import prices; the regression relationship is around 10-to-1. Using Chinese imports’ 20% share of total imports as a proxy, if the 25% tariff was fully reflected in prices – which is highly unlikely – it would generate about a 5% rise in the import price index. But this, in turn, would only lead to about a one-time half-percent rise in consumer prices. As real-time evidence, the tariffs introduced last year have yet to materialize in any material pickup in US headline inflation. The impact on US corporate earnings from absorbing the tariffs is harder to assess but again we point to the small level of imports in overall GDP as suggesting the impact at a macro level will be modest.

But China’s economy is vulnerable

Whereas exports represent only about 8% if U.S. GDP, as shown below historically exports have been over 20% of China’s GDP.  Exports have been trending lower vs China’s GDP and the generally weak performance for Chinese exports would seem to make them more vulnerable to trade barriers with one of their most important trade partners – the United States. As shown below, China’s real GDP growth has trended lower since the recession and in 2019 hit its lowest level in over 20 years. Declining exports is apt to further weaken growth, but the government is limited in their options of alternative sources of stimulus. Past efforts by the government to promote domestic sources of growth have created a substantial domestic debt overhang.  An example of this is the steady growth in domestic mortgage debt compared to GDP shown in the chart below.  Continued government efforts to prop up property markets in recent years has allowed mortgage debt to continue growing even as the stock market went into decline. The government has made it clear that they are hesitant to promote yet more credit creation and resulting higher indebtedness to support domestic demand.

Figure 3: Chinese Total and US Exports vs GDP and Y/Y Real GDO Growth

Figure 4: Growth in Chinese Mortgage Debt as % of GDP and the Shanghai Stock Index

What About Feedback Effect on Global Growth?

There is little question that China is one of and perhaps the biggest single global economy which raises concerns that a Chinese down turn would ripple through the global markets. But while China is big it is also autarchic. Its imports are primarily raw materials and foreign exposure to its domestic markets are modest – 3M correlation between the Shanghai exchange and the SPX is only 14%.   A decline in Chinese economic activity has a negative impact on commodity prices but this is largely a zero-sum impact for global markets – bad for producers but good for commodity consumers. More specifically, as shown in the chart below, in recent years the level of Chinese industrial production has not had much influence on the performance of US or global equity markets.

Figure 5: Chinese Industrial Production and US and Global Equity Performance

While Chinese trade flows are not big enough to create serious dislocation at a macro level, it has the potential to create substantial pain – and benefit – for individual industries. Moreover, while there is a chance that a scheduled meeting between Trump and Xi at the end of June could pave the way for a deal, it appears tariffs are probably part of the landscape for the foreseeable future which is going to have significant impacts on specific sectors of the US economy. The tables on the next pager are designed to give some general sense of which sectors might be hurt or supported by extended trade tensions.

The two sectors of the economy most dependent on Chinese imports are broadly capital goods and consumer products, more specifically, computers/telecom and consumer electronics. Companies in these sectors are likely to see pressure on their profit margins as they try to avoid passing on tariff costs to customers. On the other hand, companies in these sectors that are not dependent on Chinese imports – and especially, US based producers – are likely to see profit margins improve. For all the focus on soybean producers, they do not appear to be a particularly important export. But this is in part because the damage has already been done, soybean exports to China are down about 75% last year. Capital goods have the biggest exposure to Chinese trade barriers – in particular, aircraft production. Semiconductors and automotive supplies are two other sectors which may suffer from trade restrictions. 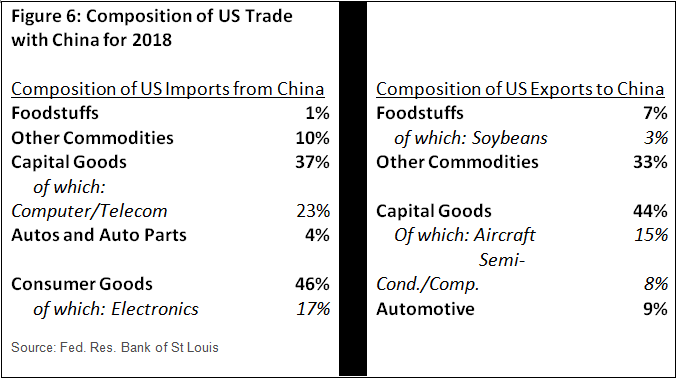 What About a Rare Earth Embargo?

China produces between 80% and 90% of the world’s supply of “rare earth” minerals which are key to a vast array of manufacturing processes. But for a variety of reasons, China’s dominance in this production is not the generally perceived ace-in-the hole trade threat. No doubt as occurred in 2010 when China tried to embargo rare earths to Japan, smuggling and trading through third parties blunted the affect. Also the risks of being so dependent on a single producer has incentivized users to maintain high inventories. US Geological Survey estimates suggest temporary a Chinese embargo would generate only mild production disruptions though there would probably be some firming of selective electronics – especially cell phones and video screens.

More fundamentally, rare earths are actually quite abundant but rarely found in concentrated natural deposits. The United States exceeded Chinese production of rare Earths into the late 1990s when the largest operation – Mountain Pass mines in California – was mothballed because processing was only marginally profitable and had adverse environmental impact. The Mountain Pass mines could be quickly brought back on line in the event of a trade embargo, especially, if environmental restrictions were eased. Production could also be quickly ramped up at other sites around the world in the event of a Chinese-created shortage. So the impact of a Chinese embargo is apt to be modest and short-lived.

US total trade (absolute sum of exports and imports) with Mexico in 2018 at $612 billion is slightly below the $659 billion level with China. Nevertheless, a move to 25% tariffs on broad trade with Mexico could be more disruptive for a number of reasons:

It is still the first inning in the budding trade dispute with Mexico so too early to forecast how this will play out. But despite the somewhat bigger stakes we still think the impact on overall macro performance is apt to be less severe than is being implied by the sharp decline in stock prices and rally in bond yields to multi-year lows. The market continues to miss that many of the dislocations from trade restrictions are positive for growth.