Capital markets off to a flying start in 2018

Global capital markets were robust across all the main products in 2017 (M&A, debt capital markets, equity capital markets and syndicated loans), as measured by investment banking fees, which hit an all-time record of more than US$1 billion.

Around three-quarters of investment banking fees were from capital market activity, with last year seeing strong levels of M&A and a resurgence in global IPOs, as well as a recovery in high yield.

The Americas, driven by the U.S., continue to be the major contributor to fees, with Europe and Asia coming close to parity in recent years. This follows an increase in capital market activity from Chinese companies in both debt and equity issuance, as well as a surge in outbound M&A activity since 2016. As a result, Asia-Pacific investment banking fees are now rivaling Europe for the first time. 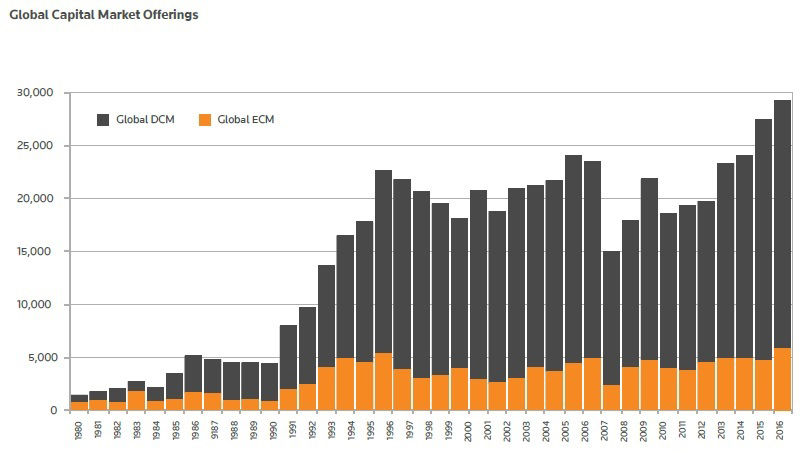 This was driven notably by debt capital markets, which have enjoyed a fairly steep increase since the global financial crisis and have raised $7 trillion for two consecutive years, as companies exploit the market for refinancing and acquisition finance.

Against that backdrop, equity capital markets got off to a flying start in January, as buoyant stock markets — somewhat euphoric following sweeping U.S. tax reforms — prompted IPO candidates to move their plans forward.

Volatility during February vindicated the decision to launch early, but as we moved through March, the IPO calendar began to fill again.

Looking ahead at new 2018 issuance, the market is particularly keen on growth and technology assets, as the phenomenal performance of internet giants, combined with strong economic growth, has conditioned investors to expect further action in those areas.

Indeed, technology is seen as the most attractive sector for M&A, according to respondents of our recent Deal Makers Sentiment Survey with 75 percent citing it as ‘compelling’ or ‘very compelling’. 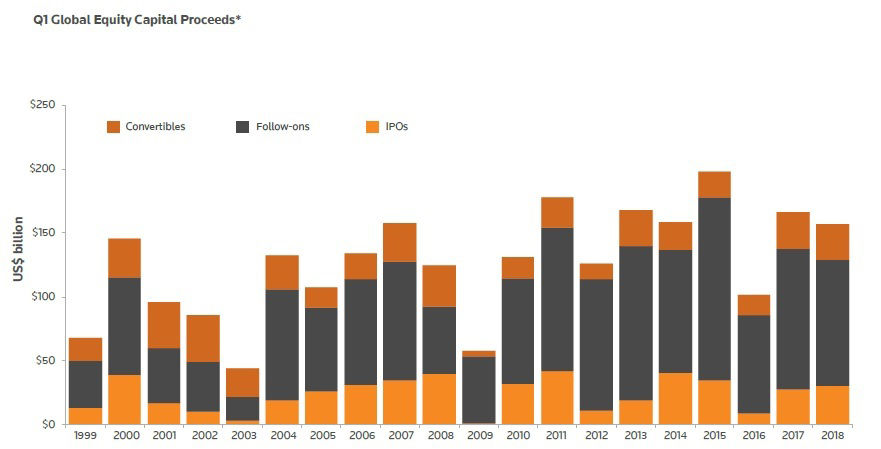 An early bellwether of the market, the IPO of Dropbox in late March, did nothing to dampen spirits, with the stock trading strongly higher (more than 40 percent up at time of writing). With that success, expect other unicorns (privately held companies valued at more than $1 billion) to test the IPO waters in the coming months.

Another unicorn, Spotify, will test the market in a different way, through a relatively novel ‘direct listing’. The cash-rich company has no need of new capital and believes it can side-step some of the complexities and costs of a traditional IPO route — something other unicorns will be watching very closely.

For all the tech-talk, the mainstay of the IPO market in recent years has been biotech.

This has proven, overall, a good bet for investors, with successful names multiplying in value. However, we are now beginning to see increased insider participation, perhaps signaling the biotech boom is long in the tooth. There is also the risk, towards the end of a strong period, that the quality reduces.

Elsewhere in the U.S., we expect to see further sector-specific issuance among, for example, regulated energy utilities, as lower headline corporate tax rates do not necessarily touch their complex capital structures, but they are still expected to pass on savings to consumers. With stretched balance sheets, more are looking at equity capital markets for succour.

The bigger picture globally is an IPO market enjoying a three-year high (year-to-date) driven also by a resurgence in Asia, Latin America and Europe (notably German healthcare and real estate). This is the year deal makers expect Europe to catch up with the more robust recovery in U.S. M&A.

Without laboring the point, technology seems to loom over most other sectors, too.

A large Brazilian IPO of payments company ADT was not welcomed by the market. A flip by private equity firm Apollo, the market was not convinced by the valuation, a fact not helped by speculation around Amazon disrupting the home security market.

One candidate that claimed to be Amazon-resistant was airport retailer Hudson. That flotation’s disappointing reception from the market may point towards a general vulnerability in the consumer discretionary and retail space. Certainly, the bankruptcies and restructurings we have seen so far have been dominated by retail names such as Toys R Us.

So far in debt capital markets, nobody has been surprised by suppressed high yield issuance in favor of loans.

An uplift in M&A activity may push levels above 2016’s anaemic performance, but rising interest rates are likely to keep refinancing activity subdued.

In the overall U.S. leverage finance mix, the proportion of high yield bonds to loans is the lowest since the global financial crisis, the latter continuing to enjoy favorable dynamics and a general appetite for floating rate instruments.

Loans are also buoyed by an unlikely resurgence in collateralized loan obligations. According to our Deal Makers Sentiment Survey, the market anticipates a 16 percent increase in syndicated loan issuance this year, on a weighted-average basis.

This situation plays out in interesting ways for different credits. For instance, lower-quality names are not as rate-sensitive, so we have seen some triple Cs raise money relatively easily (albeit with double digit yields) while some double Bs have struggled.

The big question in the bond world is around investment grade, which has continually surprised market observers.

Whether it will be a tenth consecutive record-breaking year looks uncertain, particularly as the U.S. tax reforms will provide companies with huge cash pools and ample liquidity thus reducing their need to come to market.

Going into 2018, sentiment among deal makers was very positive about market prospects. Three months in, overall, so far, so good!

Better advise your investment banking customers and gain an edge over competitors with Eikon — the one platform that meets your M&A, DCM and ECM workflow needs.

Eikon — essential for your investment banking decisions — find out how

Whether you are monitoring the market, seeking origination opportunities, making resource allocation decisions, or deep in financial modeling and presentation creation, Eikon brings you the tools, functionality, content and analytics you need.