How Ukraine transformed commodity markets in 2022

The turbulent year in commodities was dominated by the Ukraine conflict, and the subsequent sanctions imposed on Russia. But beyond the price action, the crisis has had profound impact of many sectors.

2022 was an unprecedented year for the European gas market. Prices repeatedly reached new highs. This set the stage for major market shifts and changes in consumption patterns and triggered price-ceiling discussions.

Gazprom’s suspension of most of its piped supplies to the EU lifted prices and made Europe a premium market for uncommitted LNG cargoes while acting as the catalyst for the construction of several new LNG regasification terminals across Europe.

The elevated prices helped bring more LNG to the continent, replacing most of the Russian supply.

The remainder of the deficit was bridged mainly through demand reduction and most recently demand destruction. A much lower residential demand was the result of a milder weather pattern than had been anticipated.

In Western Europe, potential demand destruction reached up to 40-45 percent in September-December, fluctuating mainly in the 10-20 percent range, according to our models.

Such measures and events helped the EU to fill its gas storage to 95 percent by 1vNovember, well above its 80 percent target.

Reduced consumption, ample gas stocks (88 percent as of 11 December), and robust LNG supply continue to provide confidence to the market this winter.

Upside risks could come from weather-related prolonged demand spikes that over time could deplete storage and hamper full replenishment by next winter. 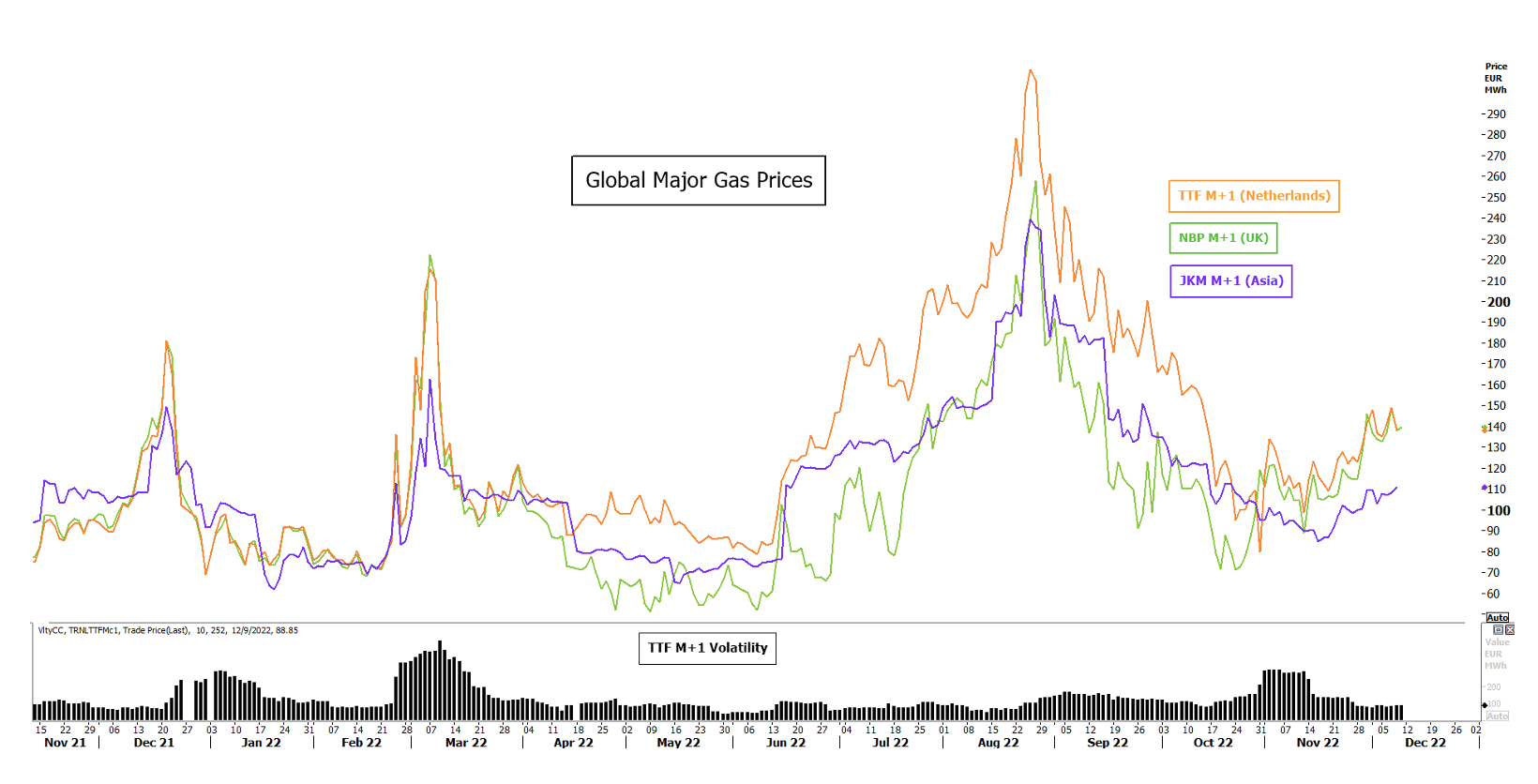 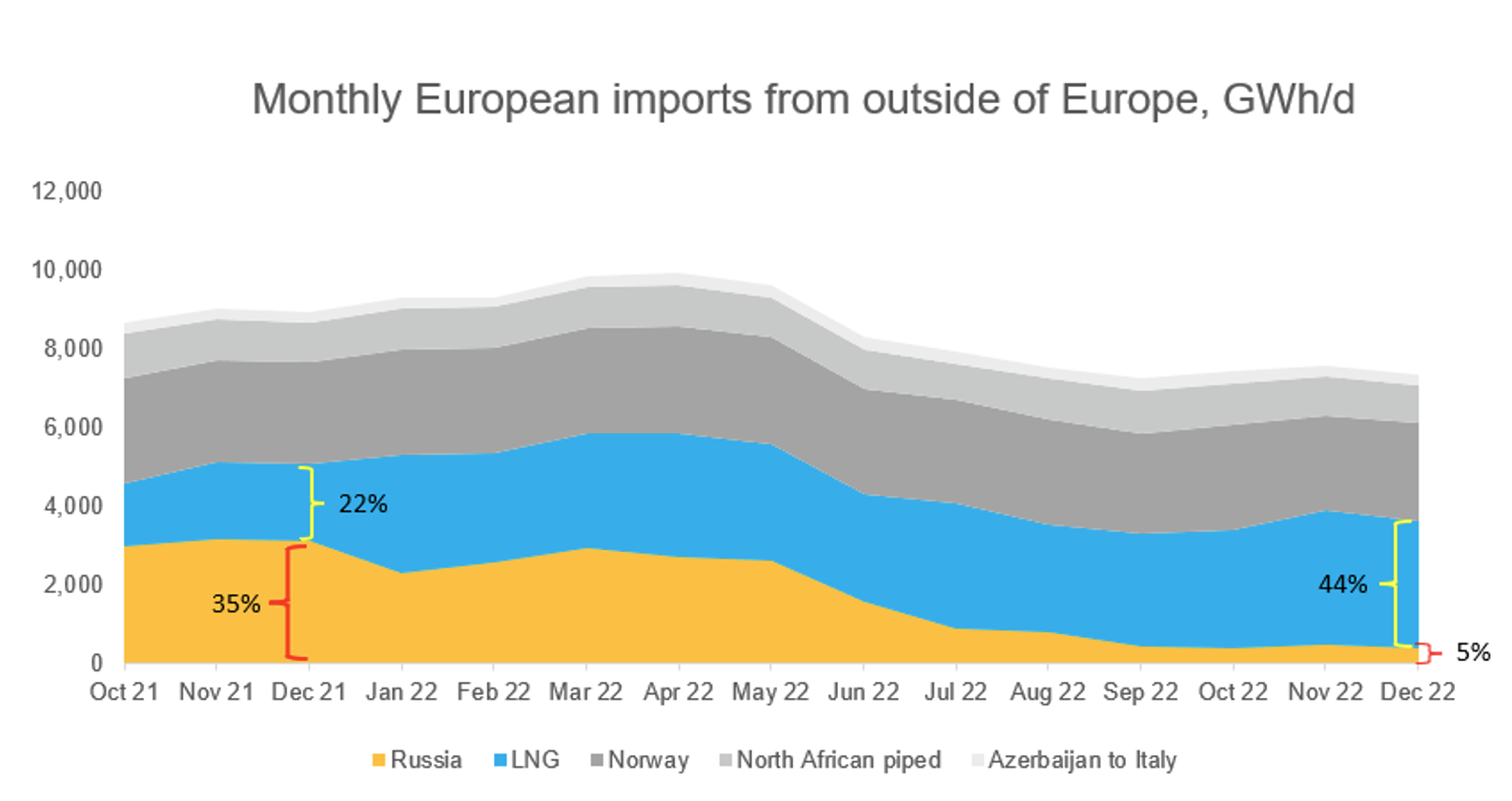 After rising to more than $125/bbl, the European oil market has returned to January 2022 levels.

While Russian exports to Europe have decreased, it has been compensated by importing similar grades from the Middle East, Latin America, Angola, and a growing supply of Johann Sverdrup from Norway.

Europe was able to stockpile medium sour barrels in the third quarter of 2022, which could help it weather future shortages. However, the displacement of Russian barrels to Asia has resulted in high freight costs but no reduction in overall supply.

The same trend will accelerate following the G7 and the EU’s imposition of a price cap of $60 a barrel on Russian crude.

Before the Ukraine invasion, Europe relied on Russia for 50-55 percent of its diesel needs, which shrunk to 40-45 percent in the months following, but has since rebounded to the top end of this range with all signs pointing to a resurgence of flows until the 5 February ban kicks in. Buyers are snapping up the fuel and consequently should be better prepared for the winter.

However, the uncertainty and chaos will come in the spring when European storage needs to be filled and Russia seeks new homes for its 3-3.5-million-ton diesel exports. How and where these barrels are placed, and how Europe manages to cover the missing Russian diesel will ultimately shape the market and the price of the fuel.

Seaborne coal markets have been greatly affected by the war in Ukraine.

A reduction in Russian gas flows to Europe in 2022, combined with a lower level of nuclear generation, has led to an increase in European hard coal generation, which has in turn underpinned a strong level of demand for high-CV seaborne thermal coal.

An EU ban on imports of Russian coal, alongside informal sanctions by other coal-importing nations such as Japan, has contributed to extreme tightness in the market for high-CV thermal coal of non-Russian origin.

This has been reflected in record-high prices in 2022.

The front-month price of the major European thermal coal import benchmark, API2, rose as high as US$438/t in early March, and while prices have since fallen from that peak, they are considerably above their historical long-term, pre-war levels.

On the supply side, periods of higher-than-normal rainfall in Australia’s coal mining regions have curbed coal exports, as have logistics issues in South Africa, while the supply of coal from Colombia has been limited due to earlier mine closures and blockades of a rail line that connects to the large Cerrejón mine.

Supply of high-CV seaborne thermal coal will likely remain tight next year, as indicated by the world’s largest seaborne coal miner Glencore which says its global production will be 105-115 Mt in 2023, broadly in line with its guidance of 106-114 Mt for 2022.

The Ukraine war has impacted the Black Sea region, which is the most vital source of grain and oilseed in the Middle East, Africa, and for many European and Asian countries. These disruptions, and Ukraine crop production losses, are affecting global grain/oilseed supply and demand.

As a result, agricultural commodity prices continue to fluctuate in tandem with the course of the war and the operation of Black Sea grain shipments.

For 2023/24, the high cost of fertilisers combined with difficulties of grain sales and transportation may force farmers to reduce winter grain plantings by around 30-40 percent. Next spring’s plantings remain uncertain, and are dependent on supplies (seeds, fertilisers, etc.) as well as the recovery of Black Sea grain shipments.

With regard to the impact on Black Sea Trading, as one of the leading grain/oilseed exporters, Ukraine is capable of supplying the global market with over 60 million tons of wheat, barley, corn, sunflower oil, etc.

Around 90 percent of the exports were shipped through Ukrainian Black Sea seaports. However, Russia’s navy had blockaded the ports since the war started in February 2022. Despite grain exports flowing westbound by railway and trucks, and use of the Danube basin ports Izmail and Reni, massive amounts of grain were stuck in the country while global markets were short of supplies.

On 22 July, Russian blockades on three Ukrainian Black Sea ports were removed by the Black Sea grain initiative, brokered by the UN and Turkey, for the safe transportation of grain and foodstuffs from Ukrainian ports.

Consequently, Ukrainian grain/oilseed exports rose to 3.8 million tonnes in August 2022 and around 6.0 million tonnes during September-October 2022, close to the normal export pace. The initiative was extended for 120 days in November, securing Ukraine exports over the upcoming four months.

Fewer supplies from Ukraine increase risks of grain shortages in global markets though expectations for production gains in Russia, Canada, Australia and Brazil should offset the impact of reduced Ukrainian supplies.

The war in Ukraine and the reduced Russian gas supplies to Europe led to very high European gas prices this year. This is turn caused an elevated marginal cost for electricity produced in thermal power plants using natural gas as fuel.

The marginal cost for a gas-fired power plant with 50 percent efficiency rose to €667/MWh in the financial market on 25 August for the September period. The level in the years 2014-2020 was typically in the range €30-60/MWh.

In the physical electricity market for Day Ahead, the price is set by the last marginal unit needed to meet the demand. In a significant number of hours in 2022, this has been electricity produced with gas, leading to very high electricity prices.

One reason for gas to be on the margin for many hours in 2022 is that the electricity supply from hydro and nuclear power has been significantly lower than in previous years.

This year, Europe experienced a drought causing the accumulated precipitation amounts in the Alp region, Spain and Nordics to be 75 TWh below normal. The largest deficit has been in France with 27 TWh less precipitation than normal.

In addition, the nuclear output has been low.

In France, the available nuclear generation was lower than in more than 10 years. This was caused mainly by corrosion problems and a large maintenance backlog, but also partly by a lack of cooling water during this year’s hot and dry summer season.

In Germany, the decommissioning of 4 GW of nuclear capacity on the last day of 2021 made the nuclear output about half of the previous years’ levels.

The high gas prices and tight supply situation in Europe led Germany to keep or bring back more than 7 GW of coal and lignite capacity which would otherwise have been decommissioned. This has pushed the yearly coal and lignite power output to the highest level since 2018.

In October, Germany decided that the three remaining nuclear power reactors would keep operating until mid-April 2023, although without refuelling.

In February, wind and solar power output reached a record of 35 GWh/h in Germany, the highest monthly production in history. Wind, and especially solar power in Germany, continue the rapid capacity expansion.

The high electricity prices led to demand destruction throughout Europe in 2022. For countries like France, Italy and the UK, the demand destruction amounted to 6 percent in the second half of 2022, while in Germany it was 8 percent.

The electricity price in France was far above previous years’ levels for most of 2022 and reached a maximum monthly value of €493/MWh in August. Germany averaged €465/MWh in the same month, while the Nordic system price averaged €223/MWh. 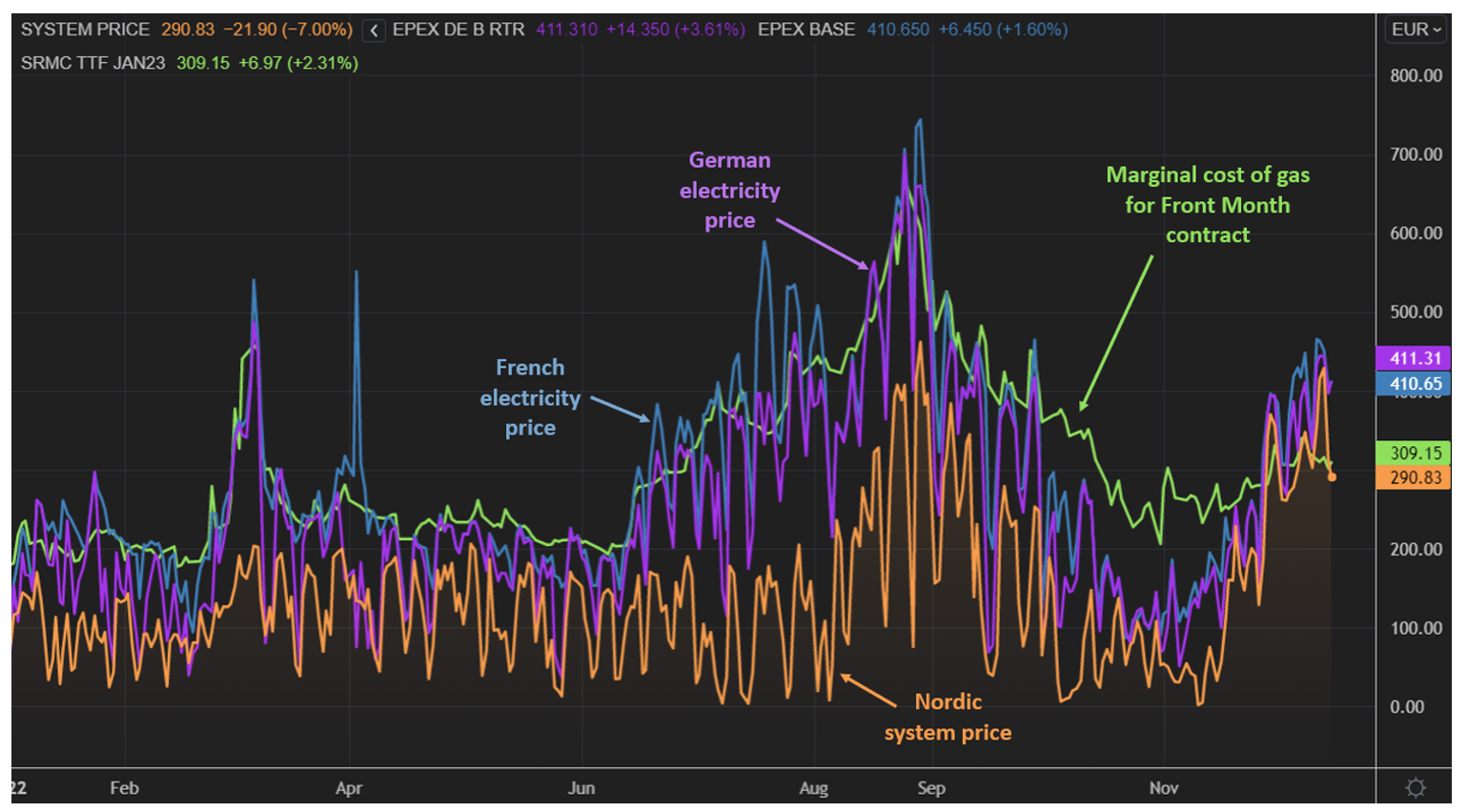 The war in Ukraine has created a new paradigm for Europe’s energy and climate policy. As European energy prices reach all-time highs amid significant volatility, the European carbon market was no exception.

After a boom year in 2021 when the cost of emitting carbon tripled in Europe, new records were set at the start of 2022 at near €100/t. Carbon prices have oscillated wildly, falling from €95/t to €55/t in just over a week before recovering to around €80/t, almost three times as high as levels seen in 2021. The benchmark EUA contract is trading near €90/t towards year end.

But what caused the carbon crash? And its subsequent recovery?

Early fears that the invasion would put the climate agenda on the back burner and delay ongoing talks to strengthen its major climate tool – the emission trading system (EU ETS) – seem unwarranted.

The war has led European leaders to declare energy security and independence from Russian fossil fuels as a top priority. They aim to achieve this by strengthening the call for energy efficiency, accelerated build-out of renewable energy and faster reduction of greenhouse gas emissions.

The Ukraine war could accelerate the implementation of a more sustainable energy policy in Europe. In late December, EU lawmakers reached the landmark EU ETS reform deal in the trilogue talks for Fit for 55 packages, strengthening the EU ETS ambition while planning to expand the scope of the scheme to more sectors, including shipping, road transport and buildings.

To ensure the security of its energy supply, Europe has temporarily resorted to reviving old coal plants.

The European power sector’s emissions are likely to increase in 2022 and 2023, boosting the demand for allowances from utilities. On the other hand, worries over economic slowdown due to skyrocketing energy prices and extra sales of allowances to raise €20 billion to finance the REPowerEU plan could add downward pressure to the European carbon prices.

How has the Ukraine war transformed commodity markets in 2022?

The conflict caused volatility and violent prices spikes – but new suppliers have stepped in to soften some impacts.