How will the REPowerEU Plan boost the energy transition? 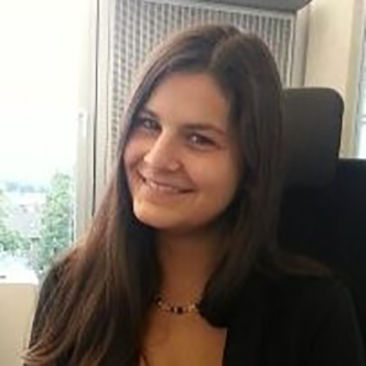 We analyse the impact of the REPowerEU Plan on the energy transition and how it could contribute towards the proliferation of renewables by 2030.

The war in Ukraine has given new momentum to the energy transition agenda across Europe and on EU level.

The realisation that Europe must gain energy independence has added motivation for driving the clean transition. Policymakers are working on raising renewable energy targets, pushing forward hydrogen strategies and the electrification in transport and heating.

In Germany, the proposal of doubling (!) the 2030 solar energy target from 100 to 215 GW by 2030 is on the table. France has recently passed a law to require open-space parking lots to be covered with solar panels by 2028 the latest, a measure which has the potential to add 11 GW alone.

A common realisation in many countries and on the EU level is that bureaucratic hurdles to permitting and building wind parks need to be addressed urgently and that to bring interconnection projects forward, resistance from local interest groups might ultimately have to be overruled.

The Fundamentals of Energy Transition: Understand how the drive to net-zero affects commodities, from supply and demand to prices and investment

How the REPowerEU Plan boosts the energy transition

The REPowerEU plan adds ambition and funding on EU-level to boost renewables, green hydrogen and electrification.

As stated in the official REPowerEU web presence, the key goal is the speeding of the EU’s energy independence to reduce the reliance on gas. For financing this, the EU is willing to go quite far and has proposed the frontloading of EUA carbon emission allowances, meaning that allowances originally intended to be auctioned in the years 2027-2030 would be sold earlier.

In the REPowerEU measures, the stronger buildout of renewables will surely drive faster decarbonisation. But what if stronger electrification counteracts this impact? How much ‘REpowering’ would be left then?

This covers about 75 percent of the current EU27 electricity generation, in addition to the British power system.

Our in-house forward price model simulates the hourly electricity dispatching and flows of the above-mentioned countries from tomorrow until 2030. The model delivers hourly market clearing prices, generation by fuel type, cross-border flows and emissions, among others.

We apply real-observed weather (temperature, wind speeds and solar radiation) from 1991-2020, “re-played” in future years, resulting in 30 different price scenarios. We suggest that within 30 years of weather data a wide – though not exhaustive – range of possible constellations of temperature, wind speed and solar radiation can be observed, including extreme weather constellations.

How will the REPowerEU Plan reduce emissions?

We want to assess how the REPowerEU initiative will contribute to driving down emissions and reducing the reliance on natural gas in Europe. We focus on the stated ambition to raise the renewable energy target on top of what individual countries have planned in their respective 2030 renewable energy targets.

At this point, we want to single out the impact of REPowerEU only, while keeping aside additional national initiatives like the German ‘Easter Package’.

Fit for 55 (FF55) is the EU’s proposal for achieving 55 percent of emission reduction in Europe compared to 2005.

The 55 percent refers to the entire EU emissions, both for the EU-ETS sectors (power and industry) and the non-ETS sectors (transportation, buildings, etc.). The ETS sectors will be expected to contribute to a higher degree towards the 55 percent goal with a reduction of 61-63 percent (negotiations are still ongoing).

For the overall achievement of the FF55, different paths were simulated by the European Commission.

Of course, the 61-63 percent goal can be achieved with an endless combination of renewable asset additions, with different combinations of solar and wind capacity, different degrees of coal-gas switching, and the electrification of heating and transport.

The FF55 “EU MIX” scenario assumes the 1,067 GW of installed capacity by 2030 mentioned in the REPowerEU document, which more than doubles the capacity of 2020.

The renewable capacity of the Refinitiv Base Case is more or less congruent with the FF55 mix scenario. We apply the national targets, for which our main source is the ENTSO-E Ten Year Network Development Plan (TYNDP).

Our REPowerEU scenario is a combination of two components:

The ‘stronger renewables’ part of the scenario consists of lifting the wind and solar targets in the countries covered in 2030 by 20 percent compared to our base case. This is somewhat higher than the REPowerEU proposal and we also apply it to the wind capacity in the UK to imply similar additional ambitions.

This means we apply the same additional growth assumption to solar and wind power, even though there is a stronger focus expressed in supporting solar power. 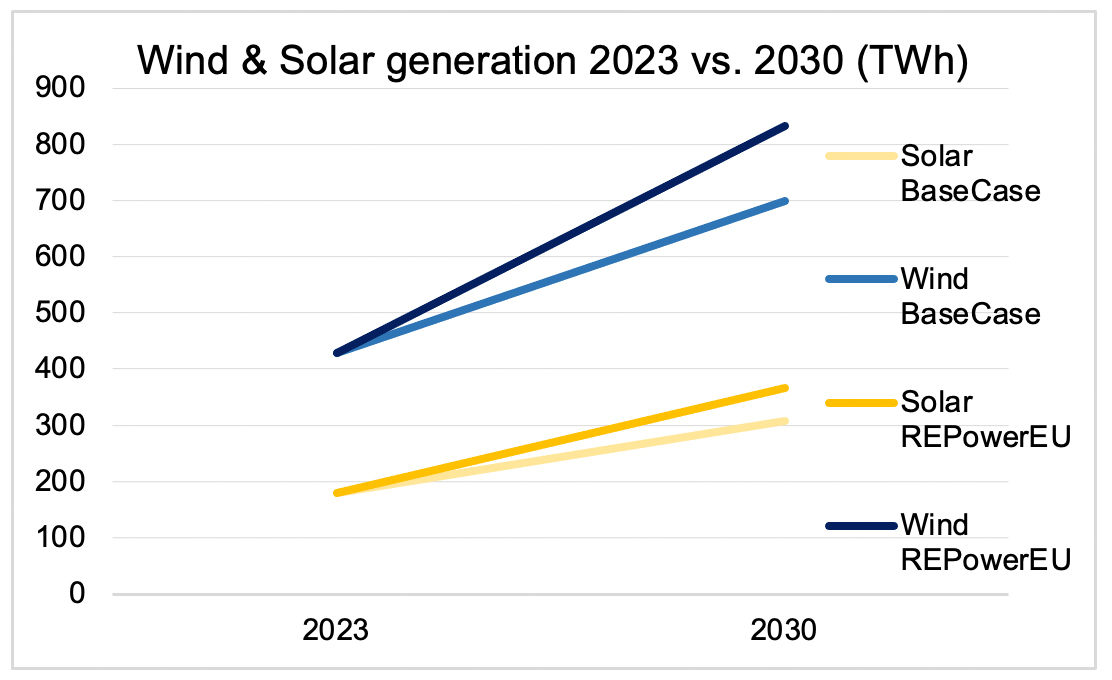 At the same time, we wanted to assess the impact of REPowerEU driving stronger electrification. We expect that stronger ambitions in renewable power generation will spur the electrification movement as well. This is also mentioned in the document, without stating any explicit targets on total power demand growth:

The European Commission says: “Ending the EU’s reliance on Russian fossil fuels will require a massive scale-up of renewables as well as faster electrification and replacement of fossil-based heat and fuel in industry, buildings and the transport sector.”

In the Refinitiv base case, we expect that there will be a continuation of the rather flat demand growth observed in the last decade until 2025 where energy efficiency gains will compensate for the ongoing electrification and economic growth impact on power.

From 2026, we expect that the electrification of transport and heat will start overtaking efficiency gains and imply moderate demand growth of 1 percent. 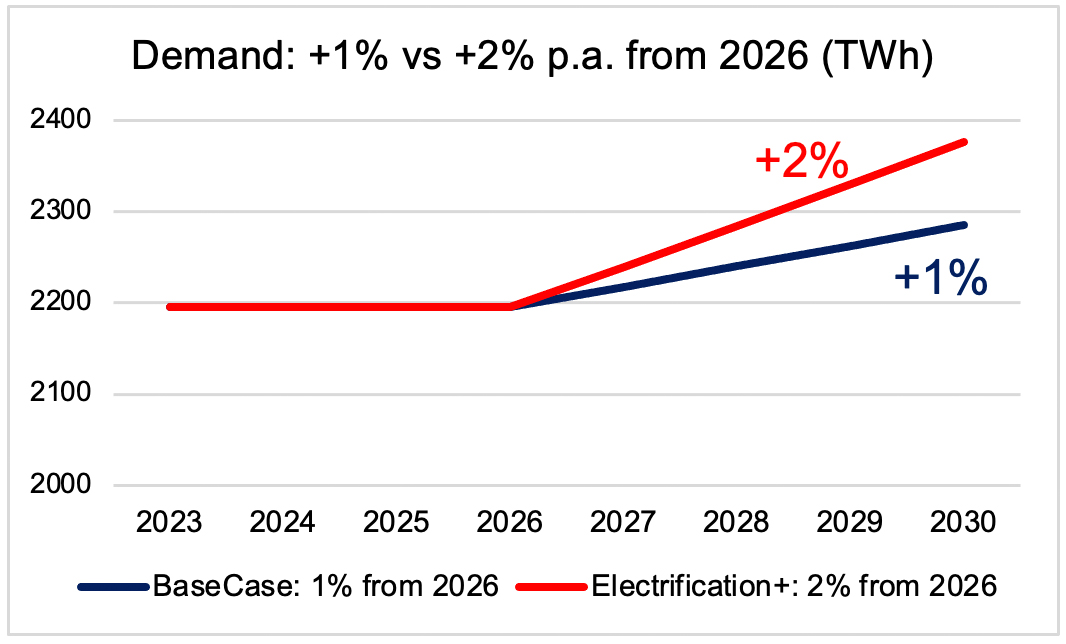 We call our second scenario layer ‘electrification+’, in which we increase our 2026-2030 demand growth rate from 1 percent to 2 percent. The 2030 demand would be 6 percent higher than what we expect in 2023, which compares with the 4 percent total demand growth in the base case.

Our REPowerEU scenario is the combination of ‘stronger renewables’ and ‘electrification+’, while we also computed the two scenario parts in isolation to assess their impact.

What were the results of the REPowerEU scenario?

First of all, we can have a look at the impact of gas-fired generation in Europe:

In our base case, the gas-fired generation decreases at a very slow rate towards 2030. We apply the forward prices for coal, carbon and gas, and expect fuel-switching towards gas to resume from 2025.

The phaseout of coal, lignite and also nuclear plants increasingly leaves gas-fired power to meet the demand not covered by intermittent renewables.

Our ‘stronger renewables’ scenario shows that the renewables’ boost under REPowerEU would drive gas replacement by 77 TWh in 2030 (-18 percent). Yet, if stronger electrification as in ‘electrification+’ was pushed at the same time, that would largely mitigate the impact.

The combination of the two scenarios would lead to just 12 TWh (-3 percent) gas-fired power saved in 2030. 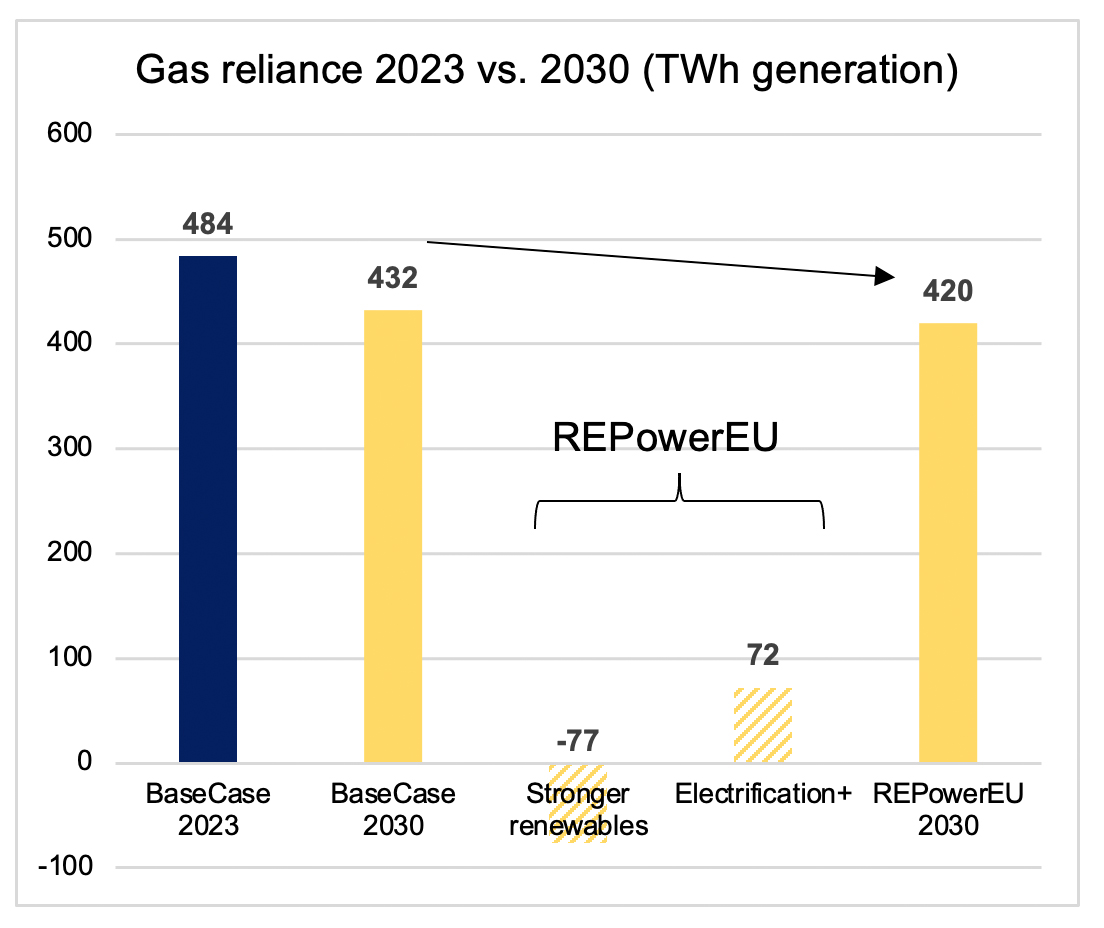 We expect CO2 emissions to more than halve by the end of the decade to 308 mt for our countries covered.

The additional contribution of REPowerEU solar and wind investments would reduce emissions by another 41 mt (-13 percent). Yet, should power demand develop more in line with our ‘electrification+’ growth path, this impact would be cancelled out almost fully.

Combining the two scenarios would lead to almost unchanged emissions at 306 mt.

We take a final look at our results regarding the impact on renewable energy share on total consumption.

We see that the RES-share could rise from 44 percent to 52 percent with the renewables boost from REPowerEU alone. Yet, in combination with ‘electrification+’ the wind and solar share would increase to 50 percent, i.e., 2 percentage points less.

The path to energy independence

The additional renewable energy additions under REPowerEU will contribute to reducing emissions and the reliance on gas for power generation. Yet, if electricity demand starts to be driven by mass-scale electrification, the REPowerEU impact could quickly be absorbed by power demand growth.

Policies aiming to speed electrification should also quantify the expected power demand impact and provide transparency and analysis on how electrification could slow down the overall decarbonisation path of the electricity sector.

We recognise that the move away from gas will be slow under the current decarbonisation path, as gas-fired power is increasingly employed to substitute coal and lignite and to provide flexible supply as the intermittent part of the power supply grows.

We emphasise the necessity of finding further alternatives to fossil gas burn.

It is not clear how much the envisioned overall hydrogen supply in 2030 will be dedicated to the power sector versus other sectors, and for this reason, we maintain rather conservative assumptions of hydrogen and biomethane supply for the power sector in 2030 in our base case.

We see that the REPowerEU Plan can significantly drive up the 2030 share of renewable energy. Yet, it is also important to emphasise that our scenario’s assumption implies stronger weight on wind investments than what REPowerEU will likely have.

If REPowerEU investments go mostly into solar power, the TWh output of our scenario would rather overestimate the anticipated generation increase through REPowerEU. In other words, it would take a lot more solar capacity additions to reach the renewable generation implied in our scenario analysis.

It will still be up to national governments to drive wind power on land and at sea by removing barriers and resolving conflicts of interest that need to be addressed at a national level. That would allow for funds (whether from the EU or any other body or investor) to go into wind technologies with higher load factors than solar technology.

A higher share of wind would also contribute to diversifying weather risk and prevent the power system from developing an over-dependence on whether the sun shines or not.

The REPowerEU Plan can have a significant impact on gaining energy independence, but European power systems will need to get ready for the electrification movement by the end of the decade and attract much more generation and storage development.

By driving an investment-friendly environment and removing legal barriers national governments can and have to do their part in attracting private investment, far beyond what REPowerEU can contribute.

The Fundamentals of Energy Transition: Understand how the drive to net-zero affects commodities, from supply and demand to prices and investment

How will Europe fare in the race for renewable energy?

Policymakers are working on raising renewable energy targets, pushing forward hydrogen strategies and the electrification in transport and heating.