In the third of our series about the new Risk Factor Eligibility Test (RFET), which will be introduced as part of the FRTB (Fundamental Review of the Trading Book), we look at how the U.S. FX options market performs in the RFET as well as understand the relative importance of different elements of the RFET criteria.

In our previous two blogs in the series we’ve touched on how MiFID II can act as a key source of ‘real’ observation data and reviewed some of the challenges associated with passing RFET using real world data.

Our previous blog conducted the RFET on the U.S. corporate bond market. Despite our expectations that this would be easy, we only achieved a 36 percent pass rate. This was driven in part by market structure and in part by the features of the test.

Here, we’ll look at the U.S. FX options market. However, we have much more muted expectations in terms of the RFET pass rate. Not only have our expectations been reset based on the results of our corporate bond analysis but the addition ‘moneyness’ as an attribute means there are more buckets so like-for-like, given the same number of trades, we’re less likely to pass the RFET. 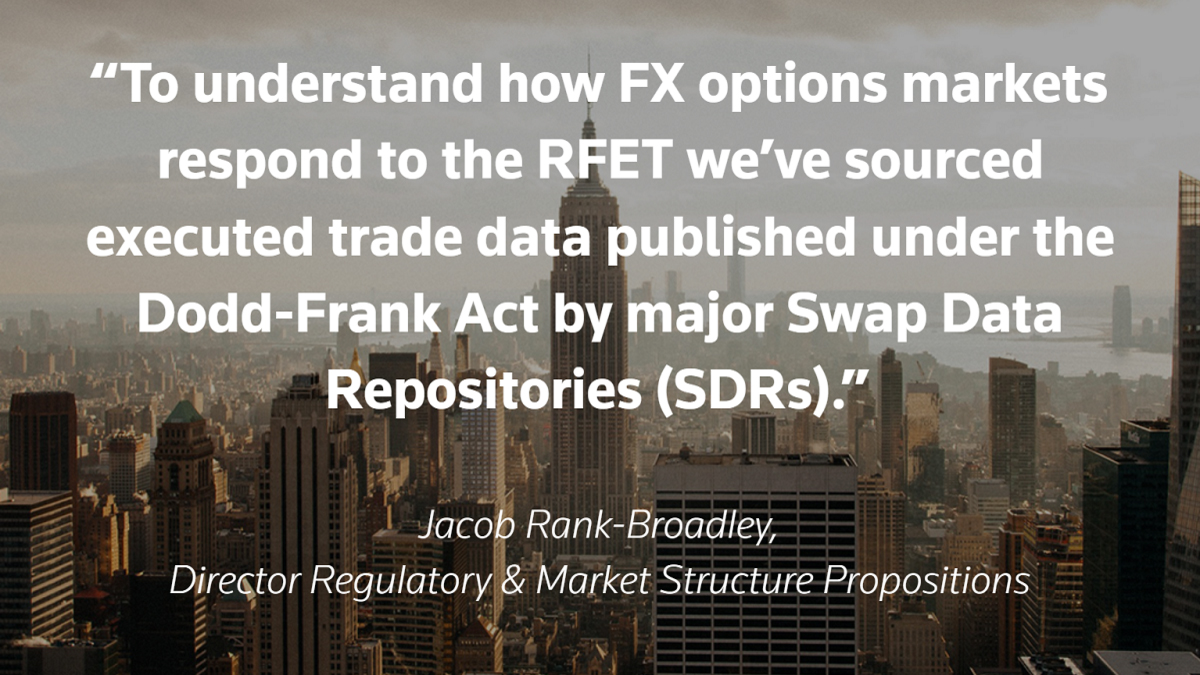 How the FX options markets perform in the RFET

In order to avoid the scenario where we only capture part of the market — and therefore draw the unfair conclusion that the market has low liquidity— we’ve focused on only currency pairs where one of them is USD under the belief that SDRs should have extensive coverage of these instruments.

The data sample we used in this analysis is characterized by 570K vanilla FX option trades executed during 2017. These trades have been allocated to maturity and ATM (At The Money) buckets based on the methodology outlined Annex B of the BCBS Consultative Document under Alternative 2.

Listen to our webinar on Managing data for the Fundamental Review of the Trading Book (FRTB).

Can we improve the RFET pass rate?

Unsurprisingly, we achieve a 22 percent pass rate (see below). This is driven by having up to 48 buckets per currency pair and much of the market activity being concentrated near ATM and in short-dated maturities.

It is a relatively uncommon occurrence to pass RFET in the wings (<90 percent ATM or >110 percent ATM) or in maturities longer than three years.

What makes RFET difficult to pass?

Now, we’ll try to understand what it is about the RFET test which makes it so challenging to pass. As we touched on in the first blog, the test is composed of two elements, both of which need to be met in order to avoid a risk factor being classified as non-modellable.

To understand which of these tests is more important, we return to our example of the U.S. Corporate bond market. Causes of Non-modelability (FINRA TRACE) (below) shows a plot of the number of days on which we saw observations against the largest gap between two consecutive observations. The risk factors that pass RFET fall in the green area. The rest of them would fail.

However, let’s face it, the chart isn’t the most intuitive way of displaying the data to understand which of the two constraints is most material, so let’s re-cut the data.

Ultimately, a risk factor can fail RFET for three reasons:

The chart Causes of Non-modelability (proprietary data) allocates NMRFs for a sample of proprietary data into these three buckets and shows that in the requirement for failing RFET is never the obligation for 24 observations on its own. 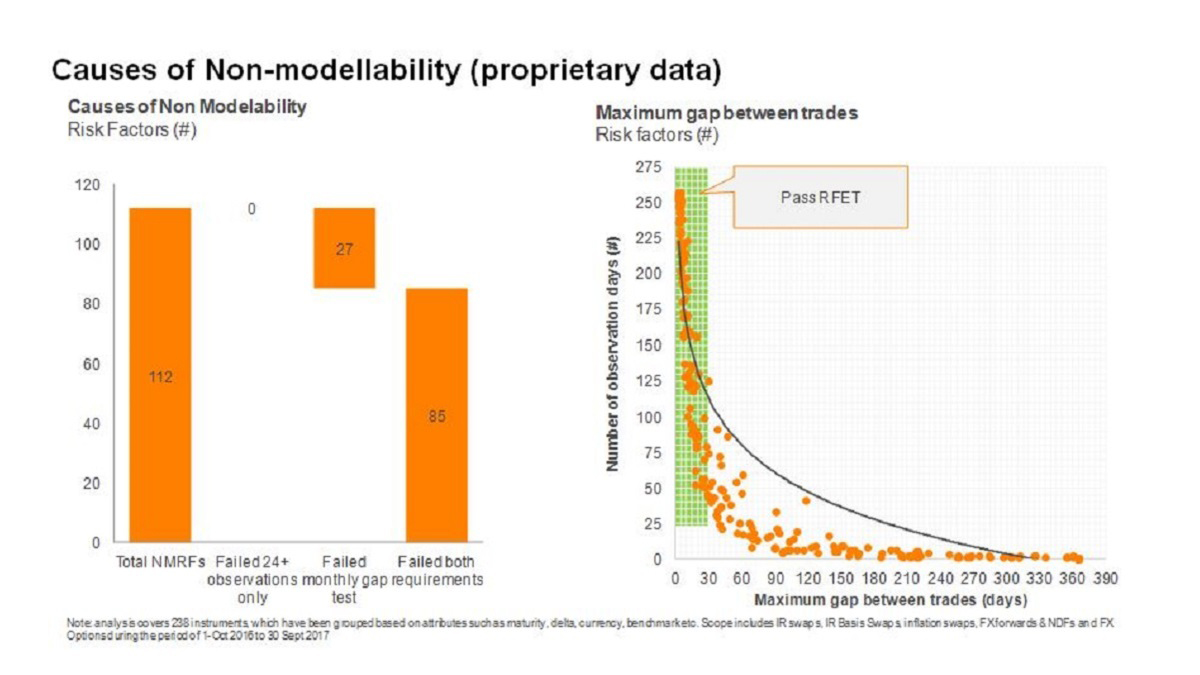 Our full set of recommendations and analysis are available in our public response to the BCBS Consultative Document.

The expertise to help you thrive in a MiFID II world

Understand your basic obligations and requirements from the MiFID II regime